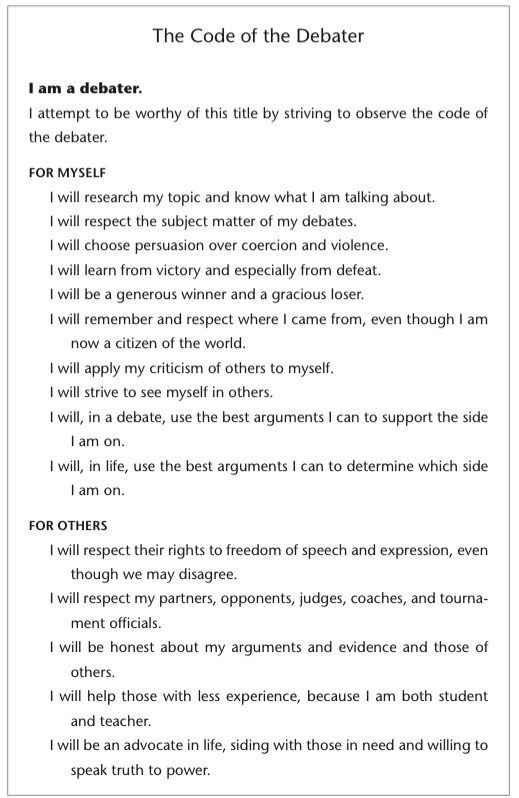 The Lawrence Debate Union at the University of Vermont facilitates the personal growth and education of students through their participation in academic debate. As an integral part of the University, the debate program actively promotes fair competition, fosters the pursuit of academic excellence, supports core institutional values of equity and diversity, and provides community enrichment.

The University is proud of the high caliber of its student-debaters. The Lawrence Debate Union is committed to the guiding principles of honesty, integrity, respect, ethical conduct, teamwork, and hard work in support of students in their roles as scholars, debaters, campus leaders, and community members.

The University expects its debaters to train and strive for their highest degree of excellence; to demonstrate academic integrity and accomplishment; and to conduct themselves responsibly as members of the campus and larger community.

Students are expected to adhere to all University of Vermont policies regarding student conduct in addition to the student conduct and community standards set out by the Lawrence Debate Union, including roles and expectations established by coaches.

What does equity mean?
All students and educators should be able to fully benefit from their participation in debate. The Lawrence Debate Union recognizes not all participants enter the activity with the same access to debate opportunities. The Lawrence Debate Union is committed to addressing these inequities and to creating a debate community in which every student and educator has the opportunity to realize their full potential regardless of race, ethnicity, gender, gender identity, sexual orientation, sex, ability, age, institutional affiliation, religion, immigration status, socioeconomic status, language status, veteran status, political affiliation, debate activity format or experience.

What are our aspirations?

We should respect participants with different talents, goals, and perspectives, and conduct ourselves in a manner that fosters respect for other individuals and encourages their participation. An activity such as debate that is designed to empower individuals must take progressive steps to achieve equity for all participants. This can be achieved through activities including but not limited to: Recruiting individuals from a variety of backgrounds; ensuring diverse perspectives and individuals are present as students, coaches, and judges; mentorship programs; commitment to novice debate; and community-building education.

Competitive equity is important, but it cannot be achieved if participants in our community do not feel safe or supported. In order for this to happen, organizational action must be present. The Lawrence Debate Union commits to raising awareness and encouraging education on issues of inclusivity. Educators and students should hold each other accountable when individuals violate ethical standards.

The Lawrence Debate Union places education at the center of debate participation. Faculty, coaches, judges, tournament staff, and students have both shared and unique roles to play in the debate education process. Competitive outcomes are secondary to learning and personal development.

Students may debate for a variety of reasons—fun, competition, advocacy, service—but participation on the Lawrence Debate Union is first and foremost an educational activity, and students participating should both be aware of this mission and committed to it.

Students should respect their fellow students’ desires to learn and engage in behaviors that are encouraging to others’ intellectual abilities.

Students should mentor beginning students to help them learn the rules and expectations of the activity, along with collaborating and providing opportunities to learn together.

Students should commit themselves to their academics and demonstrate this by ensuring that they stay in good standing within the guidelines of their institution and continue progress toward a degree.

By becoming a part of the Lawrence Debate Union, you agree to conduct yourself in a professional manner and to engage in productive dialogue and discourse with your team members, coaches, judges, and opponents at all times. While everyone on the team is not required to be friends or agree on a given issue, each team member, including coaches, are expected to engage with each other respectfully in a way that respects the integrity and dignity of the other.

Behaviors that are encouraged include, but are not limited to, the following:

• Mutual respect and support for all team members at all times—building each other up and recognizing each other as teammates during practices and at competitions alike.
• Acknowledge and congratulate team members when they do well—when one team member succeeds, that is beneficial for the team as a whole.
• Support team members when they fail to meet their goals.
• Debate ideas not individuals.
• When possible, address problematic behavior by helping others understand and acknowledge their behavior.
• Acknowledge and apologize for how your behavior affected others, regardless of whether or not that effect was intended.
• Assume others have a story that you have not heard. Recognize that other people’s stories are not yours to tell.
• Be a solution person, not a problem person. If you see a problem, work toward finding a solution rather than opining about how terrible the problem is.

It is a privilege and not a right to be a member of the Lawrence Debate Union, and every member is expected to conduct themselves in a manner that exhibits honor and respect to the team, department, University and surrounding community for the duration of their tenure as a debate team member.

As a member of the student body at the University of Vermont, each student must act in accordance with this policy and the University’s Code of Student Rights and Responsibilities, available at: www.uvm.edu/policies/student/studentcode.pdf

Prohibited Conduct.
Prohibited conduct includes violation of any of the standards established by the governing authorities identified above. By way of illustration, and without limitation of those prohibitions, debate team members must not violate any of the policies described below (many of which are described in more detail in UVM’s Code of Student Rights and Responsibilities).

A. Alcohol and Illegal Drugs, including Cannabis.  Students are prohibited from the consumption of alcohol at all team functions, including practices, tournaments, or any other team event, whether on or off campus. All students, regardless of age, are subject to this prohibition.

In addition to the above prohibited conduct, students must comply with the University’s policy on Alcohol, Cannabis and Other Drug Use – Students, available at: http://www.uvm.edu/policies/student/drugandalco.pdf

B. Smoke Free UVM. Students and coaches are reminded that UVM is a smoke free campus (http://www.uvm.edu/tobaccofree/), and are therefore prohibited from using tobacco products (including cigarettes, vaping, or other tobacco devices) and other smoke-producing substances in and around the Huber House and other campus property.

C. Hazing.  Hazing in connection with membership or participation in the debate team or team activities is strictly prohibited.  All members of the University community are prohibited from participating or being involved in hazing activities, and must abide by the University’s policy on Hazing, available at: http://www.uvm.edu/policies/student/hazing.pdf

G. Poor Sportsmanship. Debate team members at the University of Vermont are held accountable to a high standard of ethical conduct in all activities affecting the program, whether as a participant or as a spectator.  In general, a sportsperson is one who can take a loss or defeat without complaint, a victory without gloating, and who treats opponents with fairness, generosity and courtesy. Sportsmanship is respect for oneself, teammates, coaches, judges, opponents, and property. Sportsmanship also requires maintaining self-control, and refusing to be drawn into or encourage physical or verbal conflict not otherwise required by proper execution of the debate activity. All team members are obligated to represent themselves, the team, the University, and their communities with the highest level of sportsmanship.

Special Notice on Social Networking Web Sites: As a representative of the Lawrence Debate Union and the University of Vermont, please keep the following in mind as you participate on social networking web sites:
• Understand that anything posted online is available to anyone in the world. Any text or photo placed online is out of your control the moment it is placed online—even if you limit access to your site.

Investigation of Complaints Alleging Misconduct
Students should follow the complaint procedure applicable to alleged misconduct, if any (e.g., pursuant to the University’s Sexual Harassment  Misconduct Policy, Discrimination and Harassment Policy, Code of Student Rights and Responsibilities, etc.).  In addition, it is requested that all reports of violations of these Community Standards and Code of Conduct are also referred to the team Director.

Violations.
Violations of University policies will be referred to the appropriate investigatory/disciplinary body, such as The Center for Student Conduct or Title IX Coordinator.  Other violations of the Lawrence Debate Union Community Standards Code of Conduct will be referred to the Director of the Speech and Debate Program for appropriate action.  Violations of this or other University Policies may result in disciplinary action, including, but not limited to, expulsion from the team and/or team activities.

I grant permission to the Lawrence Debate Union’s coaching staff to include customary information about me in the Department’s website, social media, event programs, and other publications.