On the Write Course 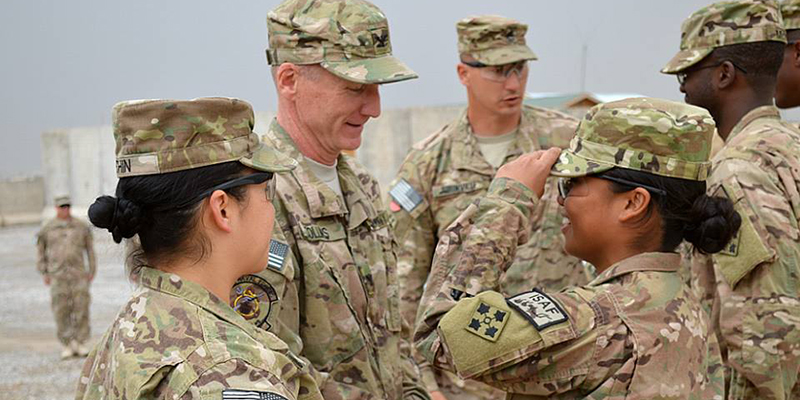 From combat medic to creative writing MFA student, Stephanie Wobby ’20 (right) credits a supportive UVM English Department with helping her find her voice and grow into an award-winning writer. (Photo: Courtesy of Stephanie Wobby, taken in 2014 prior to COVID-19.)

Though military service runs in Stephanie Wobby’s family, her mother cried when she told her she had enlisted in the U.S. Army at seventeen and would be following in the footsteps of her grandfather and uncle, who served in the Philippine Commonwealth Army of the U.S. Armed Forces Far East and the U.S. Airforce, respectively. The weight of the experience — and the sheer heft of military gear — is at the heart of Wobby’s essay “7 lbs. 8 oz.,” which was selected first runner-up in the 2019 Los Angeles Review Literary Awards for creative nonfiction.

The essay, originally written for an assignment in professor Greg Bottoms’ creative writing class, explores the realities and anxieties of enlisting. It details intimate moments from the early stages of her seven-year career as a combat medic, from privacy on a basecamp latrine and bonding sessions with her platoon unit in Baghdad, to her first time holding a weapon in basic training. Snapshots of her experience are interrupted and interjected at sound of gunfire — “crack,” “pop,” “clack,” writes Wobby ’20.

She shares details about the weight, size and specs of bulky gear she eventually grew accustomed to as a medic throughout the essay. Like a 300-pound gunner she hopes she’d be able to  pull to safety should something happen to him; more than 30 pounds of protective plates and tactical vest she wears while hovering above a toilet seat; a 7-pound, 8-ounce M16 rifle that became “another appendage” of hers by the end of her training. These details and themes are a central focus of Wobby’s writings and helped springboard her into a career in nonfiction literature that almost wasn’t.

It wasn’t until a particularly challenging semester of physics during her junior year that Wobby, a then-biochemistry major and aspiring cardiothoracic surgeon, asked herself, “What are you really doing, Stephanie?” She mapped out the remainder of her degree at UVM and knew that what she lacked in STEM, she more than made up for in creative writing abilities.

“I tend to be very shy and introverted,” she confesses. But with encouragement and support from English Department faculty like Bottoms, Didi Jackson, Emily Bernard and Maria Hummel — who helped her slowly find her voice as a writer and translate her Army medic experiences into compelling content — Wobby made the switch and changed course to a major in English. “They all made what had been a writing hobby more realistic and they took it seriously.”

Along the way, Wobby participated in multiple courses open only to student veterans, including one on Homer’s “The Odyssey,” an epic poem about one of literature’s oldest war heroes. The classic Greek tale, which follows King Odysseus’s challenging 10-year voyage home from the Trojan War and adjustment to civilian life after returning to his family, is one that now resonates deeply with Wobby and many of her classmates. She credits classics professor John Franklin and coordinator of Veterans Services at UVM David Carlson, for making it a positive experience and comfortable environment to leverage her military experience into a unique historical and literary insight.

Of her decision to submit “7 lbs., 8 oz.” to the annual print and online literary journal, “I was curious to see what I was going to get in terms of feedback, if anything,” she says, “and I just sent it out there. I don't want to say that winning contests reaffirms being a writer — you can be a writer on your own, in your own right — but this definitely boosted my confidence in the sense that it worked and people did want to read it.”

Now a first-year graduate student in Columbia University’s competitive MFA in Creative Writing program, Wobby is looking forward to a challenging semester ahead. “I want to be a professor and kind of pay it forward to those who told me ‘I think your work can stand in the literary world,’” she says. “I want to teach and write, maybe become the next Tim O’Brien.”