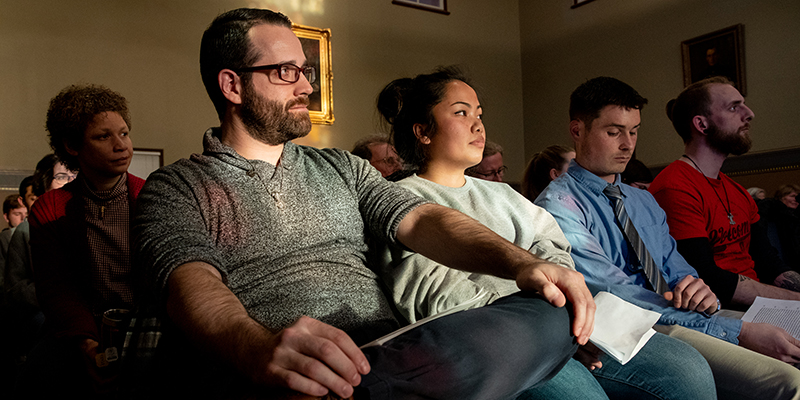 Students in the veterans-only course Home from War share what reading Homer’s epic poem “The Odyssey” together offered them: A sense of community on campus and new insights into the classic tale. (Photo: Ian Thomas Jansen-Lonnquist)

One of literature’s oldest war heroes is making 21st century connections with UVM’s student veterans through a collaboration between the Classics Department and Veterans Services. Home from War, a pilot one-credit veterans-only class, studies Homer’s ancient Greek epic poem “The Odyssey” and its main character Odysseus, while providing support to a community of veterans on campus.

Though the story of Odysseus is nearly 3,000 years old, the lessons and insights about returning home from war are still relevant today, says John Franklin, chair of the Classics Department and co-facilitator of the class. A classic tale, “The Odyssey” details King Odysseus’s journey home after fighting in the 10-year Trojan War. Cursed by Poseidon to wander the sea for an additional 10 years, Odysseus encounters numerous obstacles along his trek home, while his family and subjects in Ithaca assume he is dead. In the end, Odysseus is reunited with his wife and son and takes revenge on those who tried to usurp his throne while he was gone for two decades.

“There’s a lot of material in the poem that relates to the veteran homecoming experience: Maybe how your family started to unravel while you were gone, how you’re estranged from your partner or your children,” Franklin explains.

Together with David Carlson, the coordinator of Veterans Services, Franklin guides the student veterans in discussion about Homer’s work and provides historical context as needed. Students in the class come from all disciplines across the university and various branches of service. “They contributed more to the learning than I did because they were able to draw connections that I wouldn’t necessarily have seen,” Franklin says.

“When you read ‘The Odyssey,’ you’re not just enjoying a beautiful work of epic poetry, but you’re remembering the hard-learned, ancient lessons of our people about coming home from war,” says Carlson, who is also a veteran.

Their inspiration for Home from War came from a growing movement started by Dartmouth College Professor Roberta Stewart, who facilitates reading groups to introduce or re-introduce veterans to Homer’s epic poems “The Odyssey” and “The Iliad.” In February, Stewart spoke to the UVM community at an event hosted by Franklin and Carlson about the positive responses and results of Home from War. Stewart reminded the audience that, when it comes to war, there are only two outcomes for service members: death or a homecoming, and that “The Iliad” and “The Odyssey” reflect each of those outcomes, respectively. The reading groups Stewart organizes and Home from War offer veterans a chance to work through the struggles and celebrations of their homecoming together.

“We really connected in that course and I was inspired not just to be a better student, but to know how I was going to apply it. That’s important,” said Michelle Caver ’19, who took the course and spoke at the event. “I was lost. It doesn’t matter if you make the grade—are you thriving? Are you connecting with the world you’re in? I didn’t feel like I was able to. ‘The Odyssey’ in the company of friends who understood me like no other community understood me on campus made the difference.”