And other perspective-shifting lessons from an anthropologist 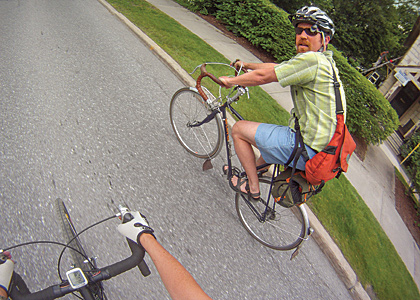 The students look astonished. It is the first day of summer school. More accurately, it is the first minute in their Global and Regional Studies course, “Bicycles, Globalization and Sustainability,” and they’re sitting around a classroom table on the fifth floor of Williams Hall.

The professor, dressed in sandals, shorts, and a floppy-collared checked shirt, just strode into class. He radiates an easy-going cheerfulness, and, except for a few silver strands in his hair and a certain scholarly furrowing around the eyes, you might think he was an undergraduate.

“I’m Luis Vivanco,” he said, smiling, identifying the course, counting heads, and arranging a few papers. And then he announced, “the best way to start off a summer class is with some smoothies,” — and walked back out the door.

Now the students are frozen, half-grinning. For an instant, only their eyes move, looking back and forth to each other, and then toward the door. From outside the classroom they can hear Vivanco announce: “I’ll say just one thing: these smoothies don’t have an aftertaste of coal or petroleum.” What to do? They get up and follow their professor.

In the dimly lit landing, near Vivanco’s office in the Anthropology Department, stands a strange bicycle. It looks like a cross between a mountain bike, a tandem, a rickshaw, and a kitchen appliance.

From between the handlebars protrudes a double-piped chrome horn worthy of a Mac truck. In the middle, a tall seatpost holds an old-fashioned-looking leather saddle plus an additional set of handlebars for a passenger. From the rear, as if the bike has been stretched, a long aluminum rack extends, supporting a pair of huge saddlebags. On top of the rack, a geared plastic housing connects to the rear wheel. In the housing sits a blender, filled with bananas and strawberries.

Vivanco pours apple juice into the blender and asks one of the students to hold the lid closed. Then he gets on the bike and starts pedaling. The rear wheel, raised slightly off the ground by an outsized kickstand, starts spinning, the blender starts whirring, the fruit liquefies into a pink mash, and, soon, Vivanco is handing out cups of bike-blended smoothie to his — still somewhat astonished — students.


Anthropologists are “merchants of astonishment,” wrote the great theorist Clifford Geertz, and Vivanco places himself in that lineage. And his capacity as a teacher, with casual good humor, to both astonish and gently prod his students to see the world, and themselves, as surprising — to make the familiar strange, he says—goes a long way toward explaining why he was chosen for the university’s highest teaching honor.

In May, at commencement, Vivanco received the George V. Kidder Outstanding Faculty Award, presented each year by the UVM Alumni Association. Dozens of Vivanco’s former students and colleagues wrote letters of nomination, praising him, like Megan Johnson ’09, for his “infectious inquisitive nature” and “unwavering support” of students in the classroom — and beyond.

Many recalled class meals and desserts at his home, his leadership on study-abroad semesters in Oaxaca, Mexico; his support of student activist efforts including a recent campaign to ban bottled water on campus; and his role as advisor to BUG, a new student bike group that launched a successful bike-sharing program.

“Ever tried to go speak with Luis Vivanco during his office hours?” wrote Mickey Hardt ’11. “Students sit and wait for multiple hours,” to speak with him, he recalled, drawn by Vivanco’s patient, incisive guidance.

Carey Dunfey ’10, remembers coming to Vivanco “utterly confused about my topic and the path,” and leaving, hours later, “with a pound or so of his books in my bag,” she noted. “He made me want to write.”

Laura Hale ’07 recalled a “devastating C,” on her first paper in her first-year first-semester Integrated Social Sciences Class. “I had always received A grades in high school and Luis’s standards were far higher,” she wrote. Four years later, she won an award for the outstanding senior in Vivanco’s department.

As a cultural anthropologist and, now, director of UVM’s fast-growing Global and Regional Studies program, Vivanco has taught many classes since he arrived on campus in 1997, including ones on the media, Latin America and the Caribbean, environmental issues in global context, Latinos in the United States, one called the “Fourth World: (Re)imagining Indigenous Cultures” — and, over the last three years, ones on mobility and the global place of bicycles.

In all these courses, Vivanco seeks to have his students develop a “deeper appreciation of the fundamental plurality of the human condition,” he says, drawing on Geertz. Not just confronting “inconvenient facts,” as Max Weber described the role of useful teachers, Vivanco urges his students to wrestle with constellations of differing facts that, peeled open, reveal deeper structures that shape human economies, power relations, and beliefs.

“There are facts in the world,” Vivanco tells his students, “And depending on who you are, you’re going to produce different kinds of facts.”

This realization rocked Josh MacLeod ’04, who is now pursuing a doctorate at Brown University in anthropology. “Initially a biology major, by chance I took an anthropology course with Dr. Vivanco,” he wrote. “The disruption this course caused in my life was quick and decisive; the next semester it was out with genetics and in with the social construction of reality.”

On the fifth floor of Williams, Vivanco’s students are considering the social — and literal — construction of his bicycle.

“This bike is an interesting design that obviously is uncommon in this country,” he says, after Erica Bareuther ’13 has had a chance to pedal it for a second round of smoothies. “It’s called a cargo bike.”

Vivanco’s model is called the Big Dummy, made by the hip Minneapolis-based manufacturer, Surly. Base retail: about $2,200. Fully tricked out, as Vivanco’s edition is, it’s north of $4k. He had to write a four-page proposal to his wife, Peggy, to explain why the family needed this extremely expensive rig.

But in another light, the Big Dummy is a bargain. “Now, we’re a one-car family,” he explains to his students. And he uses the bike to take his kids to school, drop off his trash on Pine Street and to, as per the proposal, take his wife out on dates. “It’s our family SUB,” he says, laughing.

Even more important — and unsettling, perhaps — in the context of this class is how this type of bike fits in a global narrative. “Believe it or not,” he says, “this bike models itself on the design that the Viet Cong used during the Vietnam War to move material up and down the Ho Chi Minh Trail. They were called long-tailed bicycles. During the war, they would drape people who were wounded over these things.” And the Big Dummy is a cousin to “boda boda” taxi bikes that ferry people across the Uganda/Kenya border.

In other words, there are many narratives, a plurality of facts, Vivanco would say, around what a bike — or any cultural object — means and what it does that may upset received ideas. “I got this bike blender thing aftermarket,” he says — and the only fuel it needs is a rider who ate breakfast. With the Big Dummy, “we’re trying, through our example, to show that there are other ways to think about getting around, other ways to enjoy a smoothie that don’t require a plug in the wall, other ways to think about what a bike is,” Vivanco says. He’s making the familiar strange.

One of the standard narratives in the United States is that bikes are for kids, cars are for adults; that bikes are static, cars are evolving. “But why is that?” Vivanco asks. His cargo bike is just one example of the many bikes that the students will study in his class including electric bikes and high-tech “velo” bikes that can attain speeds that would allow them to travel on highways — if they were allowed.

And this is the point: Vivanco wants his students to think beyond the bike itself to the patterns and forces behind it. “Bikes challenge the dominance of the automobile and the industries that uphold it,” he wrote on his course syllabus. Americans spend almost twenty hours a week in their cars, he notes, and about eighty percent of that time doing short-haul errands like getting groceries, half of which are under three miles. Bikes provide “another choice,” Vivanco says.

Therefore, bikes provide a lens on a whole host of deadly serious, adult topics, Vivanco tells his students as they gather in a half circle around him and his bike, like the obesity crisis, climate change, neighborhood cohesion, affordable transportation, urban sprawl, peak oil, and safe streets.

Or, rather, they might be part of a not-so-deadly alternative vision of how we organize roads, patterns of transport and consumption, and our very lives — an alternative to the approaching “carmageddon” of grid-lock and pollution, Vivanco says, drawing on the scathing social criticism of Ivan Illich.

“People are making choices about how they get around and I want you to think about these,” he tells his students. “These are all structured by very powerful forces from capitalism to the media. That is what this course starts introducing you to: What are those forces that are shaping our mobility choices? In what ways do bike social movements challenge the status quo to make changes in the ways we think about streets? Is the bicycle really “green” and, if so, in what ways?”

These questions nest within Vivanco’s larger interests in environmental anthropology. He studied environmental movements in Costa Rica for his PhD dissertation, which led to two books, Green Encounters and an edited volume on adventure, Tarzan was an Ecotourist.

“I remember I was doing field work in Monte Verde,” he says, resting his hand on his bike, as his students sip smoothies from cups. “I would be hanging around ecotourists and I’d often ask them: Why are you here? What are you looking for? This is what anthropologists do: listen and ask questions.”

And with this deep practice, “Luis is very good at recognizing the legitimacy in what students are saying,” Jens Pharr ’12 says. “Even if the student isn’t really fluent in the language of academia, he hears you.”

Luis Vivanco and his students finish their smoothies and head back into the classroom to get the discussion started, and to get going on a deep stack of reading. He wants them to know more than they do now when they head out in a few days for a class field trip — on their bikes. 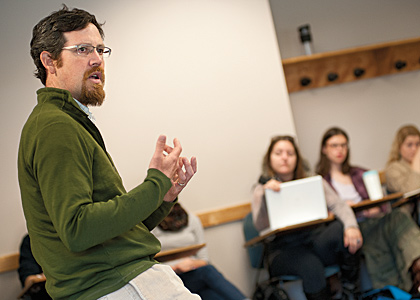