What to Read, Listen to and Watch This Black History Month 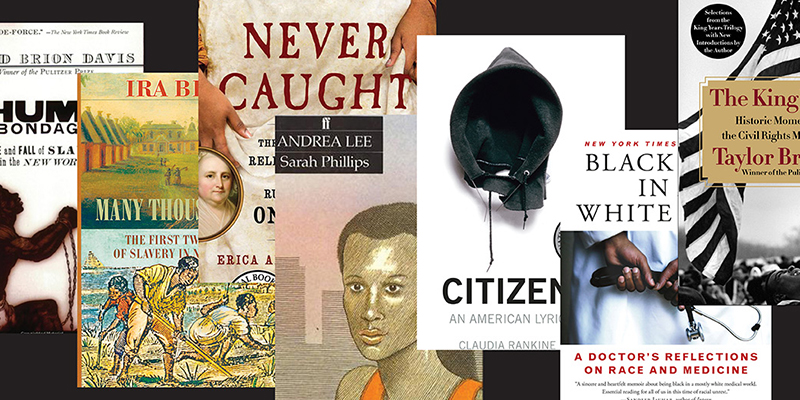 In celebration of Black History Month, we asked members of the UVM community to share their recommendations for what to read, listen to and explore in February and beyond.

This year, engage with Black History Month in a meaningful way.

In the Burlington area? See events related to the themes of diversity and cultural awareness.

We’ve asked students, staff, faculty, and alumni what else they recommend fellow UVM community members read, listen to or explore this month. From interactive archives to illuminating books and inspirational songs, here are 16 of their top picks.

Emily Bernard, professor of critical race and ethnic studies and Julian Lindsay Green & Gold Professor of English, recommends the PBS docuseries “Eyes on the Prize.” “You cannot go wrong with this 14-part series. Dip in at any point to watch gripping mini-stories within the larger narratives. You will be amazed at all you didn’t know,” she says.

Bernard also recommends “Sarah Phillips” by Andrea Lee, “the first book I ever read where I saw my own particular Black history represented.”

Beverly Colston, director of the Mosaic Center for Students of Color, recommends a poetry book, “Citizen: An American Lyric” by Claudia Rankine. “It’s sharp, poetic, spare and devastating,” she says. “Rankine creates incisive renderings of the impact of racism and racial ‘micro-aggressions’ on Black bodies — there’s nothing ‘micro’ about the violence inflicted to our psyches and souls. I felt the absurdity and pain of the position that we Black folks are in as we attempt to live ‘normal’ lives while constantly being reminded to stay in our place — a place designated at the bottom of some well.”

Meghan Cope, professor of geography, recommends a digital exhibit by the New York Public Library, Navigating the Green Book. “There’s a new film called ‘Green Book,’ but we should all know about what the real Green Book was — a ‘motorists’ guide for Black travelers to find safe places to eat and sleep within contexts of violent racial oppression, between the 1930s to 1960s. The books are fully digitized at the New York Public Library and their site has some interactive mapping, so users can construct routes and explore the constraints on Black travelers,” she says.

Cope also recommends the following websites: Mapping Inequality, which “allows visitors to explore the ‘redlining’ maps of the 1930s in U.S. cities, right down to very fine street-level detail. And they have a follow-up website, Renewing Inequality, which looks at the urban ‘renewal’ of the 1960s and its racialized practices,” she says; and Colored Conventions, which “collects and digitizes records from the ‘Colored Conventions,’ gatherings of mostly Black men to advocate for rights between the 1830s and 1890s, both before and after the Civil War. Visitors to the site can learn about political organizing and activism by Black communities and even help the project by transcribing documents.”

Skyler Nash, a sophomore political science major and public policy minor, recommends the book “The King Years: Historic Moments in the Civil Rights Movement” by Taylor Branch. “I think this book has really continued to stick with me because it exposed me not only to some of the most impactful moments of the Civil Rights era in the United States, but also places them in context of the time period and the surrounding historical events. Branch's writing has played a huge role in my world view and how I see race and history in the United States. It is also a major reason as to why I am so concerned with some of the rhetoric that has come back to the surface of our national discourse as of late, because it has enlightened me enough to see some of the frankly eerie parallels,” he says.

Chris Veal ’14, G’21, a current medical student in the Larner College of Medicine, recommends the gospel song “It Ain’t Over” by Maurette Brown Clark. “Every Sunday throughout my childhood, I accompanied my family to our Baptist church in Detroit, Michigan. As many African-Americans know, church is more than just a gathering place for worship; in many cases it’s the glue that holds our communities together,” he says. For Veal, the church’s greatest role was as a source of inspiration. “The Sunday before I left to start college at the University of Vermont, the choir sang a song by Maurette Brown Clark called ‘It Ain’t Over.’ The main verse is a quote I’ve heard my grandmother and my mother tell me whenever times seemed impossible: ‘It ain’t over until God says it’s over.’ These words still ring in my mind as I work my way through medical school and life. At moments when I just want to give up, those words and that song play in my head and keep me moving forward.”

Veal also recommends “Black Man in a White Coat: A Doctor's Reflections on Race and Medicine” by Damon Tweedy, M.D. “I read this book as I was applying to medical school and it really helped me understand the significance of being a Black male in the field of medicine, while also shedding light on why more are needed,” he says. For more, he suggests listening to “Why Are There So Few Black Men Going into Medicine?” on WBUR’s “On Point.”

Daphne Wells, director of Student Life, recommends the book “Roots: The Saga of An American Family” by Alex Haley. “This work is credited with generating interest in genealogy. It is a story developed when the writer, Alex Haley, spent 10 years tracing his family’s roots back to Africa and is the first major work to tell the story and history of African-Americans in the U.S.,” she says.

Whitfield also recommends the books “Inhuman Bondage: The Rise and Fall of Slavery in the New World” by David Brion Davis and “Many Thousands Gone: The First Two Centuries of Slavery in North America” by Ira Berlin, for basic overviews of the history of slavery in America, and “The Problem of Slavery in Early Vermont, 1777 – 1810,” written by Whitfield himself.

Writing for this story contributed by Kaitie Catania, Andrea Estey, and Thomas Weaver. Special thanks to the students, staff, faculty, and alumni who offered their recommendations and reflections.