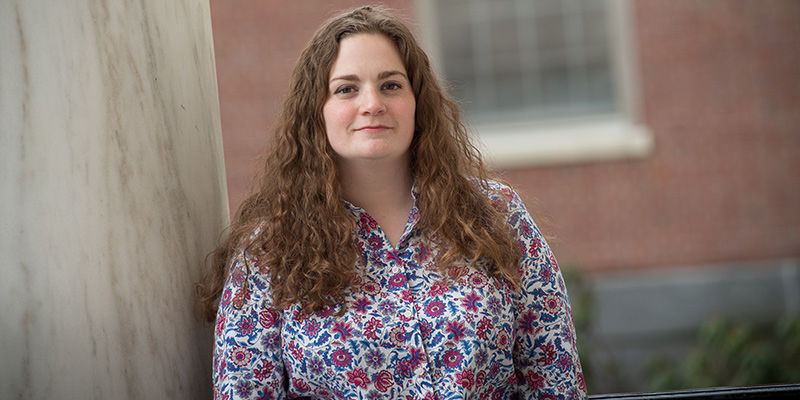 Jillian Scannell ’20 is one of only 62 college juniors in the U.S. to win a highly competitive Truman Scholarship. In her time at UVM, Scannell has been active in environmental and related issues, including as an organizer for the 2018 Rally for Climate Action on campus. (Photo: Sally McCay)

Junior Environmental Studies major Jillian Scannell has been named a 2019 Harry S. Truman Scholar, one of only 62 college junior-year students in the country to win the highly competitive national award. The Truman Scholarship recognizes students who want to make a difference in public service and provides them with financial support for graduate study, leadership training and fellowship with likeminded students.

Scannell was selected for her environmental commitment and campus leadership.

“We congratulate Jillian on this recognition for her combination of political and leadership experiences and her deep commitment to climate change policy,” said Honors College interim dean David Jenemann. “Jillian’s contributions on campus speak to her ability to make things happen, while courageously facing systemic problems and facilitating solutions.” The Fellowships, Opportunities, and Undergraduate Research Office, overseen by the university’s Honors College, coordinates the application process for the Truman Scholarship and other nationally competitive fellowships.

A native of Rutland, Mass., Scannell is deeply committed to addressing climate change, a cause she became passionate about after attending Al Gore’s Climate Reality Leadership Corps Training in 2017. She plans to devote her career to the issue, through environmental policy and by running for elected office.

Scannell has been active in environmental and related issues throughout her years at UVM. She has served as an Eco-Reps Change Agent, an Environmental Studies Peer Mentor and a Steering Committee Member for UVM Stands in 2016, which organized an environmentally-focused rally on Inauguration Day and chartered a bus for students to attend the People’s Climate March in Washington, D.C. in April 2017.

One of her most impressive accomplishments was organizing UVM’s Rally for Climate Action in the fall of 2018. Thanks to her outreach, over 300 members of the UVM community, including many students, gathered to hear addresses on raising awareness of climate change and developing plans to combat it from a group of speakers that included Vermont Senator Bernie Sanders and Representative Peter Welch.

Scannell is also an active student leader. She currently serves as the speaker of the Student Government Association and is a member of the SGA Committee on the Environment, the UVM Food Insecurity Working Group and the President’s Commission on Alcohol and Other Drugs. Jillian has volunteered during the UVM SGA Community Clean-Up and assisted in planning the 2017 UVM SGA Women in Leadership Summit. Jillian has been elected to serve next year as the president of the Student Government Association.

Candidates for the Truman Scholarship go through a rigorous, multi-stage selection process. In 2019, 840 candidates were nominated by 346 colleges and universities, a record number of both applications and institutions. The 199 finalists for the award were interviewed in March and early April by one of sixteen regional selection panels.

The new Truman Scholars will receive their awards in a ceremony at the Harry S. Truman Presidential Library and Museum in Independence, Missouri on May 26, 2019. Scannell hopes to use the corresponding award of $30,000 for graduate studies in pursuing a Masters of Public Administration at the University of Vermont.

The Harry S. Truman Scholarship Foundation was created by Congress in 1975 to be the nation’s living memorial to President Harry S. Truman. The Foundation has a mission to select and support the next generation of public service leaders. The Truman award has become one of the most prestigious national scholarships in the United States.