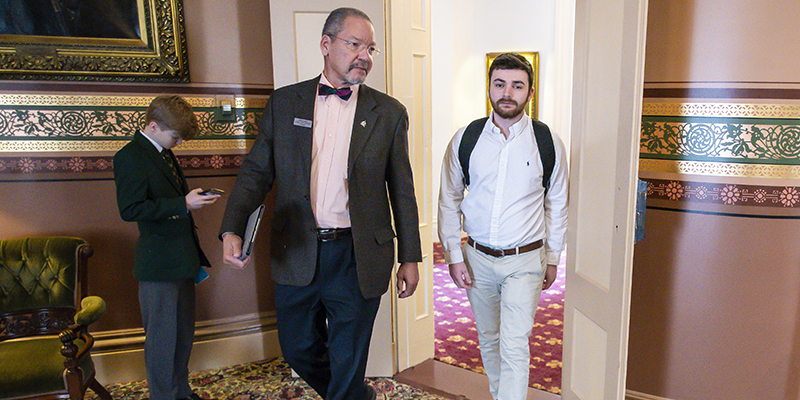 In late February, Henry Rood planted himself near the front of the conference room for the Vermont Climate Solutions Caucus and listened to state legislators chat about a regional initiative to curb greenhouse gas emissions.

Rood, a University of Vermont double-major in political science and philosophy, took notes on his laptop. He was sitting in for Rep. Barbara Rachelson, a Burlington Democrat, acting as her eyes and ears when she had to be elsewhere.

During the final semester of his senior year, Rood took on a Legislative Services internship offered by the UVM College of Arts and Sciences. The Washington, D.C., native said he ultimately plans to attend law school. By working for Rachelson, who sits on the state House Judiciary Committee, Rood figured he could closely watch progress on proposals related to judicial reform and treatment of minors.

“I get to learn about a lot of issues, and issues that aren’t already settled,” Rood said. “I’ve always been super into politics.”

At the statehouse, the interns mostly spent their time as Rood did, attending committee meetings to track the progress of bills co-sponsored by their legislators or topics of particular interest to them. Some also kept their legislator’s official websites updated.

All of the students receive UVM course credit for the internship, said Richard Watts, director of the Center for Research on Vermont and coordinator of the College of Arts and Sciences internship program. He has worked to increase the number of professional opportunities for the college’s 4,500 students by categorizing internships into a half-dozen Communities of Practice—including community journalism; strategic communications and social media; urban and rural planning; digital media; and research.

“I keep looking for ways to find students meaningful experiences in Vermont,” Watts said in February. “Internships are so important for so many reasons for a student’s success.”

With a good internship, college graduates typically land better jobs for better pay and are more likely to pursue careers that match their interests, Watts said. “What we’re trying to do is remove every obstacle, so it’s more available to more students.”

One goal of the Legislative Services internship is to give students a chance to experience the ambiance, excitement and architectural majesty of the Vermont Statehouse during the session, Watts said. They can see in person how the process works, watch legislators interact in the hallways and hear them negotiate deals to get things done.

After just two months into the session, however, the center of state legislative activity went silent, shuttered during the statewide emergency to slow the spread of coronavirus. Most of the students left campus and finished the semester from their apartments or families’ homes, and the legislators shifted to remote communications and committee meetings via the Zoom online video platform.

But that wasn’t the end of the UVM Legislative Services internship. Digitally savvy by nature, the students simply pivoted to do their work entirely online. Most continued projects for their legislators, stayed in touch via email and phone, and “sat in” on their usual committee meetings once they resumed on Zoom.

“It was really great that they had two-plus months to develop a relationship with somebody” before social distancing started, Watts said.

Jack Spanierman, a UVM junior and global studies major with a minor in international politics, found that Zoom meetings made it easier for him to keep up with more committees and stay better informed as the pandemic response unfolded in Vermont, he said.

“I could sit on my couch eating my lunch and watch a committee meeting,” said Spanierman, who worked with Rep. Nader Hashim, a Democrat from his hometown of Putney, through the end of the semester.

He missed the “dynamics” and “energy” of the physical statehouse, but the internship’s fundamental benefit of helping him understand the legislative process remained in tact, Spanierman said. “This whole experience taught me the importance of being in the know and paying attention.”

Vermont’s citizen legislature creates a unique niche for interns. General Assembly members have no staff to do research and help them follow multiple bills through the web of committees that have overlapping meeting times. They have to chase down their colleagues later to learn the details of the discussion.

“We don’t have enough time to do anything,” said Rep. Rebecca White, a Democrat from Windsor who paired up with UVM senior Rebekah Silver for her Legislative Services internship. “We have no staff, so you’re constantly trying to figure out what you need to know.”

A file cabinet in the statehouse contains the bills proposed each session, and White never found the time to check the ones she co-sponsored. She asked Silver to pull that list and gather updates. Silver went a step further and created a spreadsheet of all the bills so White could easily view their status.

“This is incredible,” White recalled telling Silver at the time. “She saved me so much time.”

Rep. Jill Krowinski, the Democratic majority leader, had valuable internships herself that shaped her career and has embraced the mentorship role with her own interns, she said. Krowinski brought on UVM junior Olivia Gerard to monitor her priority issues and follow them through the committee process to a vote. Gerard also updates Krowinski’s blog posts on legislative items and spruces up her legislator’s website.

“So she’s getting a little bit of the flavor of constituent outreach and communications, as well as how a bill reaches the floor,” Krowinski said of Gerard.

Like Rood, Gerard hopes to go to law school and has considered a political career. Watching Krowinski, she has learned the nuance and planning required for a legislator to successfully move policy.

“The amount of strategy that goes into it – I never had seen it in person,” said Gerard, who is majoring in political science with a minor in environmental studies.

She recalled a detailed deliberation during a meeting of the House General Housing and Military Affairs Committee. “It was like a 10-minute conversation on whether they were specifying ‘public place or ‘public space.’”

Even after introducing her to the realities of work in politics, Gerard said, the internship has only enhanced her fascination, Gerard said.

“This gave me my first look into it,” she said. “It has opened my eyes.”