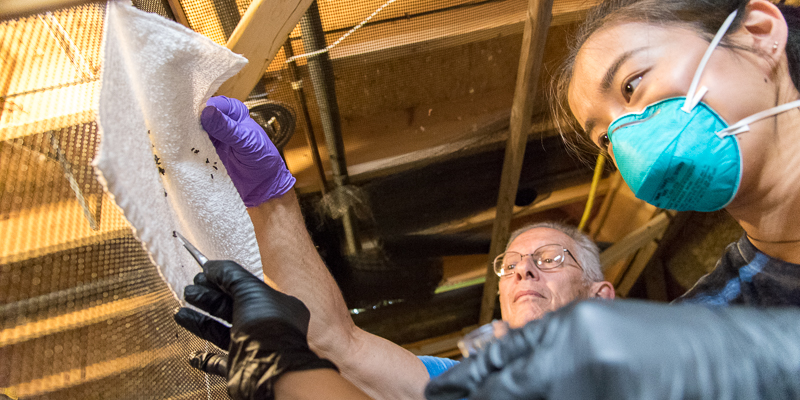 On an eighty-degree morning this July, Suma Lashof ‘18 stops her car in front of a ranch house in Milton, Vermont, and walks to the front door. She knocks and two smiling, gray-haired people, Barry and Maureen Genzlinger, open the door.  “Good to see you again,” Barry says. “So, what do we need?”

“Some more poop,” says Lashof, with a grin.

A few minutes later, Lashof steps inside a wooden cage in the Genzlinger’s basement—where Barry runs a home-grown bat rehabilitation center. Over Lashof’s head, two tiny bats sleep under a white cloth on the wall. Crouching beneath them, she carefully picks up tiny pellets of bat guano off the floor with tweezers and deposits them into a plastic vial.

This is undergraduate research in the real world. An environmental science major in the Honors College, Lashof is studying the DNA of two species of bats in Vermont, little brown bats and big brown bats. “Historically, these species have been all around the state,” she says, “but with the arrival of white-nose syndrome, many bats have died and their ranges are shifting.” Lashof gets the DNA from feces she’s collecting at the bottom of bat nursery colonies across the Champlain Valley—barns, attics, big trees, rock piles.

Her task: provide genetic verification for a method that Alyssa Bennett, the small mammals specialist for Vermont’s Department of Fish and Wildlife, uses to visually distinguish the two bat species. When Bennett examines unknown fecal pellets, she sorts big vs. little brown bats based on the pellets’ size, color, and insect remains. This helps state biologists to monitor the location and health of roosting bat colonies—without having to catch or handle these sensitive creatures. Working with Bennett, and UVM biology professor Bill Kilpatrick, Lashof aims to confirm that the visual technique is fully accurate. In other words, her senior thesis could go far beyond describing bat science—it could help conserve bats.

That is, it could help if Lashof can get her experiments to work. It’s Monday, August 21, the afternoon of the much-anticipated solar eclipse. Some people are already gathering on the sidewalk outside Marsh Life Science building to look up with dark glasses. But inside, Lashof and professor Kilpatrick are hunched over a laptop in his office examining long sequences of letters representing mitochondrial DNA base pairs— CTAACGGCCTCTATTTTA. “Um, how are we doing?” she says, repeating the question of a reporter who dropped by. “Well, we’re…” then she pauses, sighs, and smiles diplomatically, “we’re doing some problem-solving.” 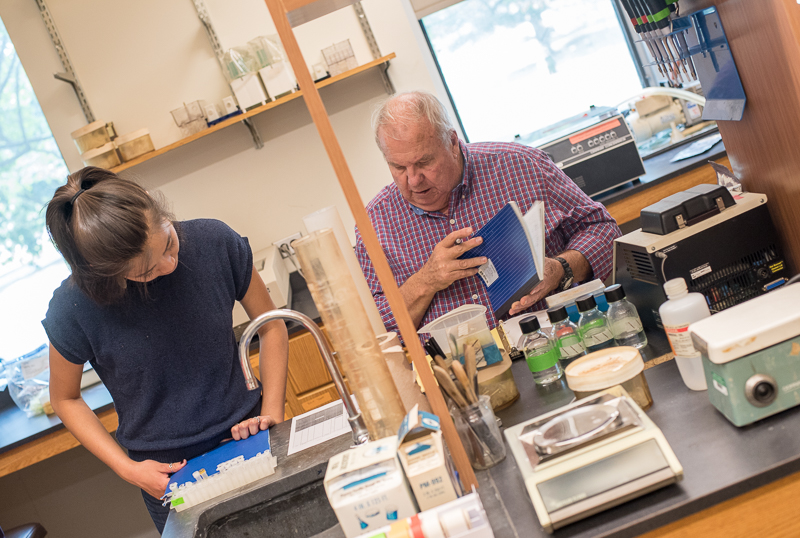 Lashof’s summer-long research effort—with financial support from the Office of Undergraduate Research, including a Green Mountain Scholar Fellowship—has yielded good-quality DNA from ten bat colonies (plus the Milton guano as a control group) and she’s learned a lot of lab techniques. But, so far, Lashof has not been able to “identify a primer that will work,” she says, to properly amplify the DNA so that “we can clean it and send it off to be sequenced. If we don’t have that, we can’t continue. But we don’t know why it isn’t working.”

This is not failure, Bill Kilpatrick notes, this is education. “There is an advantage of getting into research,” he says. “You do a lab in a genetics course, and, of course, it’s going to work. It’s designed that way.” But Lashof’s struggles to amplify the DNA of these bats requires a much deeper dive into what it actually means to experiment.

“I had this idealized picture in my mind that there this is clear methodology and it’s just simply going to work,” Lashof says. “That’s not the reality of research.”

It’s a Thursday afternoon in September during the first week of classes and first-year students keep walking into the lab where Lashof is working, looking for their lecture hall.  For more than a month she’s been developing custom primers, searching for ones that can amplify the genes for two proteins—cytochrome B and cytochrome oxidase 1—she wants to use as a tool to distinguish the two bat species. Each time she runs the experiment—preparing a goopy gel that she tests with an electrical current and then stains—she looks for tell-tale bands in the gel, “around the 200 base-pair mark,” she says. And each time, no band. So she tries again.

As she waits for the electrical current to do its work on the gel, Lashof talks about her love of dancing and her role as the president of the student-run Orchesis Dance Company. She describes her mentoring work in the DREAM program with a seven-year-old refugee child from Nepal. She talks about growing up in the small town of Sudbury, Vermont, and about how her parents, two moms, have supported her to come to UVM. And she talks about bats. She thinks they get a bad rap.

“They’re not scary,” she says, “they’re beautiful.” For more than sixty-five million years, these creatures have been masters of the nighttime air, flexing their elongated finger bones to change the camber of the live skin with which they fly—and echolocating with pinpoint precision to catch beetles and mosquitoes on the wing.  “I didn’t know much about them before I came to college. Now they are my passion,” she says. “It all started with a paper in a class on invasive species.” There she learned that nine species of North American bats are being devastated by white-nose syndrome, a deadly disease caused by an invasive fungus.  Since white-nose arrived in North America in 2006, it has killed more than six million bats in 31 states—including many bats in Vermont, especially little brown bats that were once common but have now been reduced by more than ninety percent and are listed by the state as endangered. 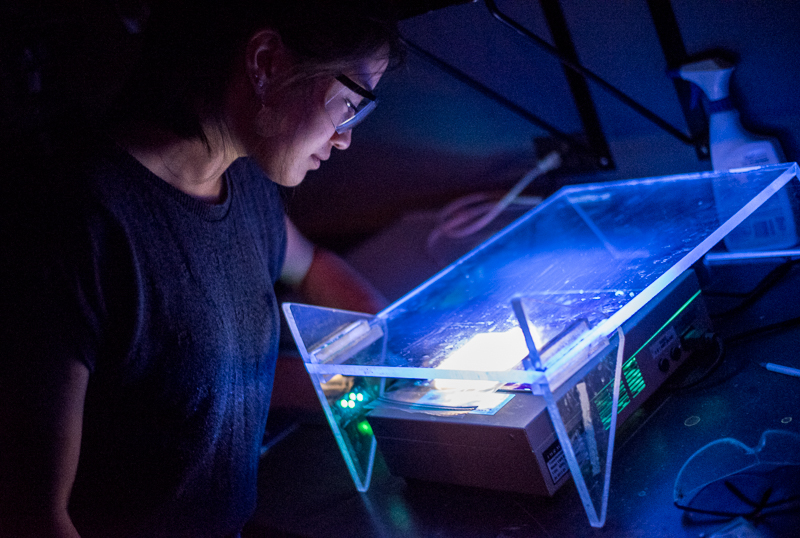 “OK, let’s get upstairs to look at this under the UV light,” she says. In a few minutes, she and professor Kilpatrick are bathed in an eerie glow, staring intently at her block of gel shining purple on a light table under a plastic shield. “OK, let’s see,” Lashof says with caution. They lean in closer.

“Whoa. Yes, we have something. That looks like a band,” Lashof says.

“Sure does,” says Kilpatrick.

“That’s around the 200 mark,” says Lashof, with a laugh and huge smile. “Yay! Finally, after a month of trying."

It’s a Friday afternoon later in the fall—after “a busy, busy week,” of classes and lab time, Suma Lashof says—and she’s practicing a dance routine by herself in an old racquetball court at the Patrick Gymnasium. Tomorrow is the open audition for Orchesis and she’s going to be demoing this routine that she performed last year. “It’s a fast one. I need to practice it to make sure I have it right,” she says. Lashof cues up the theme to Westworld and soon is spinning and soaring across the wooden floor. She’s happy her bat research has overcome a major hurdle, but there is a lot more work to do before her study is done. Sometimes science is a bit like dancing. “I love doing this,” Suma Lashof says, starting the music again. “I’m going to stretch a little bit more. And then I’m going to do it all over again." 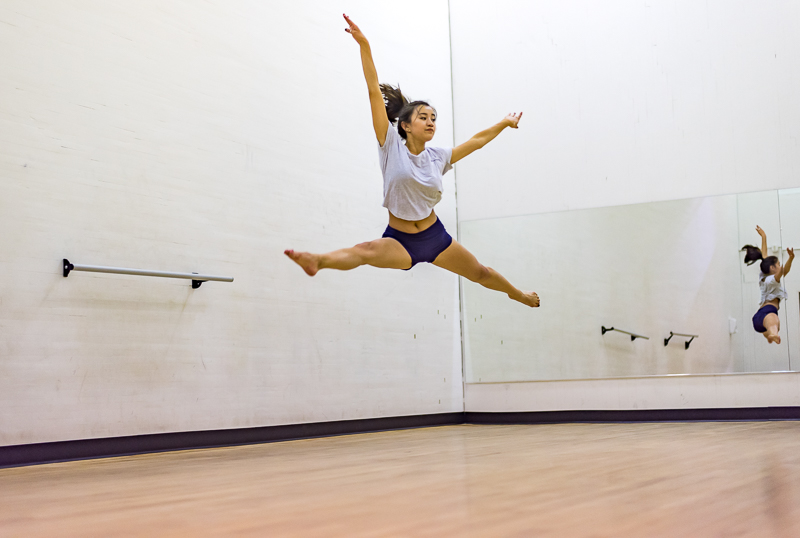