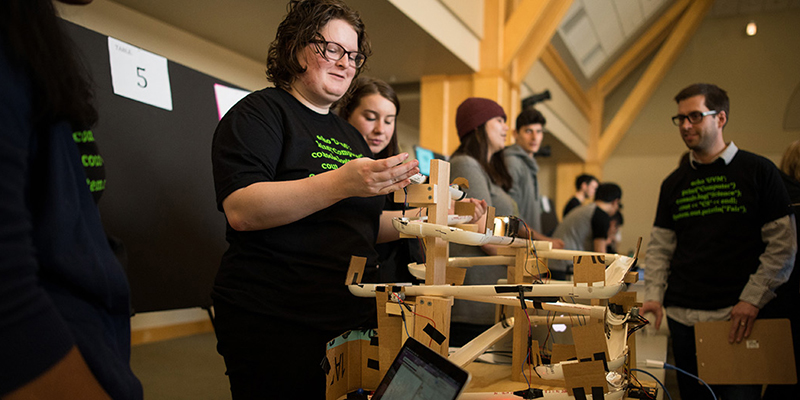 From a simulation that predicts the spread and maximizes the containment of forest fires to a searchable web database of Supreme Court cases, more than 100 computer science-based projects offered solutions to problems big and small at this year’s Computer Science Fair.

The annual fair, held each fall, allows students to present their web designs, research, programming projects and more for a chance to win up to $300 in cash prizes across a variety of categories. This year, 224 students gathered in the Davis Center to demo their work and discuss their projects with a team of judges and with the University of Vermont community.

“I think it’s fantastic,” said Elise Kerouac, a judge from Vermont Information Processing. “The students get to work on a project all semester or year, and then get to show it to their fellow students and also to prospective employers in the area. It’s a great opportunity.” Kerouac was joined by judges from organizations including IBM, Dealer.com and BAE Systems, Inc. 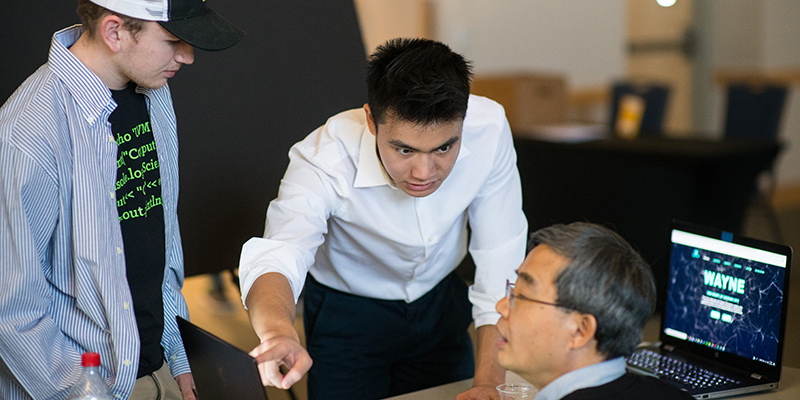 Marble Mayhem, for example, towered over its booth table as different colored marbles raced down a custom track. Student creators and computer science majors Sarah McLaughlin, Shravya Suddala, Abby Linstone and Clasby Chope constructed the project with PVC pipe, wood, cardboard, sensors and motors that work together with a computer to separate and move marbles through unique routes based on the marble’s color. The team explains the system could be refined with stronger materials and brighter colors and be used as a teaching mechanism for children to learn programming and engineering. 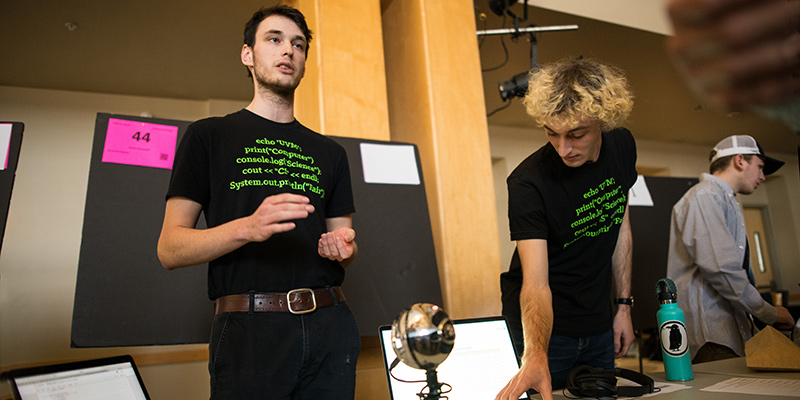 Smaller in scale, students Andrew Hollar and Ben Crystal invited fairgoers to lean in and record their voices in a microphone that identifies which everyday objects their voices mimic. Their project, What’s That Sound?, compared spectrograms—or visual representations of sound—of fairgoers’ voices to spectrograms of 50 pre-recorded sounds, ranging from church bells to dogs barking.

“If you could sync it up with Google Glasses or a similar technology, it could potentially tell a deaf person that there’s a car sound coming from their right or that there’s a dog barking behind them,” explains Crystal.

Other projects included helpful websites and apps to assist Catamounts on campus. Natasha Geffen, a senior psychology major with minors in computer science and applied design, presented Cat Course, a website that shares helpful feedback and information about UVM courses based on Registrar’s Office data and student reviews. Similarly, Ben Sylvester, Christopher Suitor and Nana Nimako created a website that expedites UVM’s roommate or on-campus room switch process through their project The CNB Swapper, which earned the second place People’s Choice Award at this year’s fair.

Suitor and Nimako are no strangers to tech competitions like the Computer Science Fair. The idea for The CNB Swapper was born at a previous hackathon on campus in which the two participated. “We wanted to try and do it for real, so we did. Using skills we learned in CS-148, we were able to make the application for The CNB Swapper,” says Suitor, who plans to enter the fair again in the future.

“My favorite thing at the CS Fair is checking out the other projects. When I look around, I think, ‘Wow, I could have made that.’ So I’ll be back next year, even stronger,” says Suitor.

With the support of a generous gift by alumni Anthony F. Voellm ’93 and Beth Zimmerman ’93, students like Suitor will have access to participate in the Computer Science Fair for years to come.