A Summer On, Not Off

From internships and research to jobs and projects, there’s really no off-season when it comes to UVM’s academic ecosystem 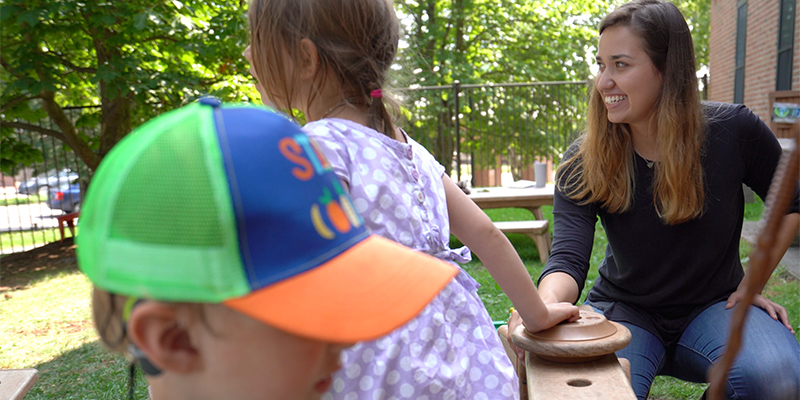 Rising senior Kira Hislop spent her summer at the Campus Children's Center. She's been a childcare assistant there for the last two years. “My time at the school is something I’ve been really proud of,” says the education major and human development minor. (Photo: Ian Thomas Jansen-Lonnquist)

Following the excitement of Commencement, the summer months that follow on campus may appear to pale in comparison to spring’s liveliness and rigor. That is, unless you know where to look. Whether they’re conducting research in a close-knit lab or working for various departments on campus, interning nearby in downtown Burlington’s bustling business district or pursuing a passion project elsewhere in the world, Catamounts are learning hands on year-round. Read on to meet a few such undergraduate students.

At the Campus Children’s Center, rising senior Kira Hislop (above) is speaking two languages; besides English, she’s chatting with students in American Sign Language, too. Hislop has worked as a childcare assistant for the last two years, supporting teachers and leading an inclusive classroom. “My time at the school is something I’ve been really proud of,” says the education major and human development minor. Among the biggest things she’s learned: patience, and seeing each child’s perspective. “I also feel very strongly about the capability of children. As adults, we can look past just how perceptive and resilient children are. I see that every day when I look at the growth of the children in our classroom,” says Hislop. The Vermont native has her sights set on a career in education policy. 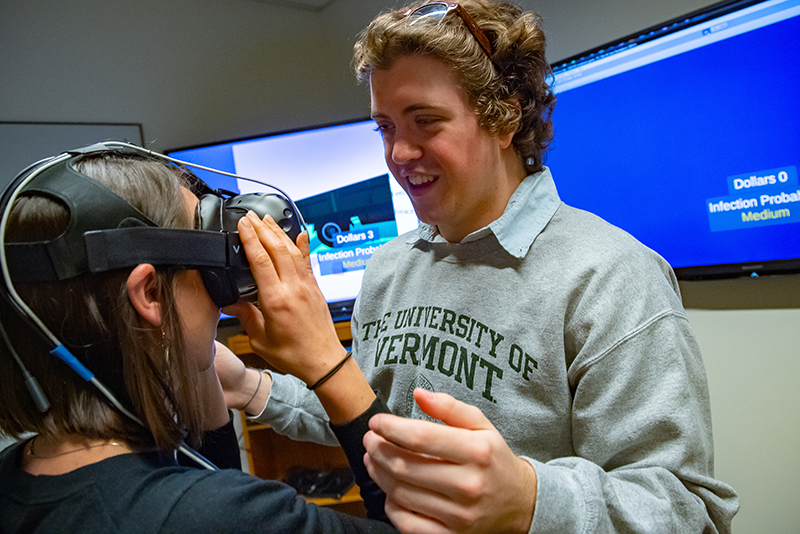 “There have been many surprising things working for the lab,” says Robby Beattie, a software engineer in UVM’s Social Ecological Gaming and Simulation Lab. Beattie created the code, art assets and animations for a virtual reality simulation aimed at understanding human behavior as it relates to biosecurity practices. (Photo: Sally McCay)

“This was not the kind of work I thought I would be doing at UVM,” says sophomore Robby Beattie. The computer science major has been part of a project in UVM’s innovative Social Ecological Gaming and Simulation (SEGS) Lab, where researchers are using video games to better understand complex systems. One example: to understand the role of human behavior in animal disease outbreaks, the team is designing video games in which players assume the role of a hog farmer and make risk management decisions. This summer, Beattie worked as a software engineer developing virtual reality and multiplayer simulations, “in the interest of finding out what makes people comply with biosecurity practices,” he explains. Beattie says his experience developing VR in the lab this summer helps set him apart. “The SEGS Lab has added a lot to my UVM experience, getting to work on a real project,” he says. “Having doctors and professors come to me with questions about virtual reality has been pretty cool.” Read more about the research project. 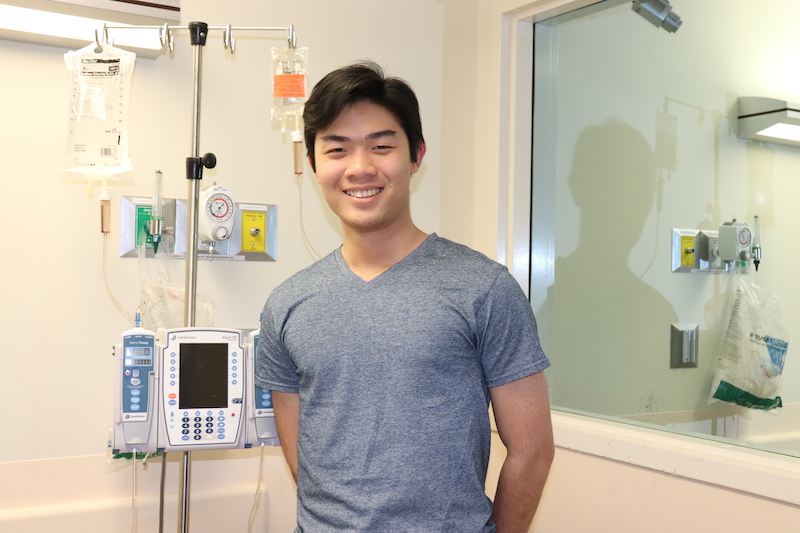 "Nursing programs are competitive and UVM's is no exception," says Key Nguyen. Thanks to his studies and hands-on experience in simulation labs that mimic real-world medical settings, he's prepared to work with seniors and high schoolers alike this summer. (Photo: Janet Franz)

Nursing student Key Nguyen ’21 is spending his summer bouncing back and forth between his past and his future with his summer jobs as a resident care assistant at the Converse House senior living center downtown and his role as an Upward Bound tutor-counselor at UVM. A first-generation American, college wasn’t always in the cards for Nguyen. It wasn’t until a chance encounter at a nursing home inspired him to pursue a career in nursing in order to care for his aging parents and others in the future. While he tends to residents at Converse House at least 20 hours a week in the evening, his days are spent helping underprivileged high schoolers prepare for college. “A lot of the students were interested in the healthcare field, so it was part of my job to help them navigate the college pathway to the professions they desired,” he explains. Now halfway through his undergraduate studies, Nguyen plans to stay at UVM to pursue a master of science in nursing, followed by a doctor of nursing practice degree. Read more about Nguyen.

Ross Buchman’s summer plans may have been in motion as far back as December 2018, but his preparation and diligence paid off—literally—when he was able to secure funding for his summer research on brain cancer, a topic close to his heart as a cancer survivor himself. As a paid lab assistant for a neurosurgeon at the Washington University School of Medicine in Saint Louis, Missouri, rising sophomore Buchman combines his passion for cancer research and medicine with a strong resume-building experience in a cutting-edge lab, all while getting the financial support from UVM to pursue the opportunity. Buchman spent the spring semester at UVM proactively putting the necessary pieces together with the help of the Office of Fellowships, Opportunities and Undergraduate Research (FOUR). When the final part clicked together in the form of a summer fellowship from FOUR, he was able to check off all the boxes that comprised his summer dream job. Read more about Buchman’s research. 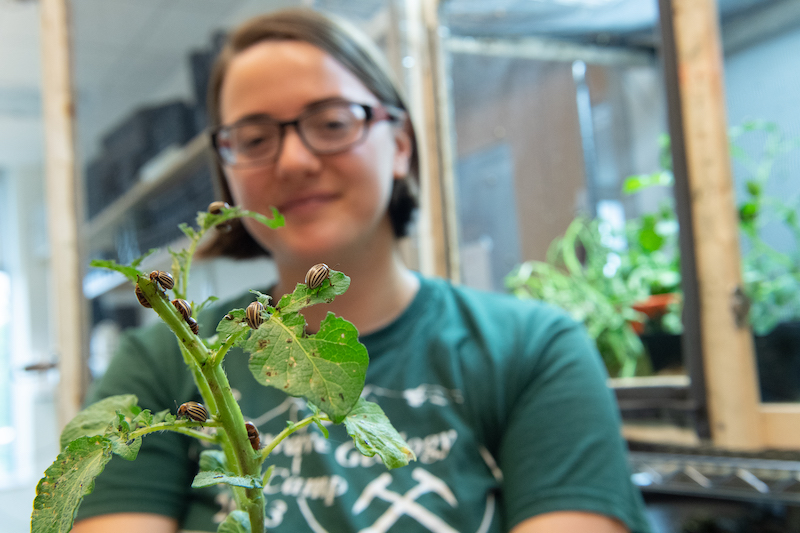 Wildlife biology senior Zoe Albion feeds and inspects hundreds of Colorado potato beetles at the Chen Lab in the College of Agriculture and Life Sciences. These pests are invasive to potato plants, but Albion's research might contribute to an organic solution that deters them one day. (Photo: Sally McCay)

Hanging out with a bunch of pests all day may not sound like an exciting summer to some, but fortunately for Rubenstein School senior Zoe Albion, she’s grown quite fond of the little Colorado potato beetles she’s researching. The wildlife biology major is monitoring their stress levels in response to predators in an effort to better understand strategies for natural pesticides. In the Chen Lab, she’s physically placing spiders—a predator of the beetle—near the pest for variations of time and recording their responses to the preditor’s close proximity. “This is an amazing opportunity to do real research and contribute to a body of scientific knowledge that is pertinent and applicable to farmers in Vermont, as well as elsewhere,” she says. “I'm learning from extremely experienced graduate students and professors, and I'm getting a better understanding of how science becomes practice.” 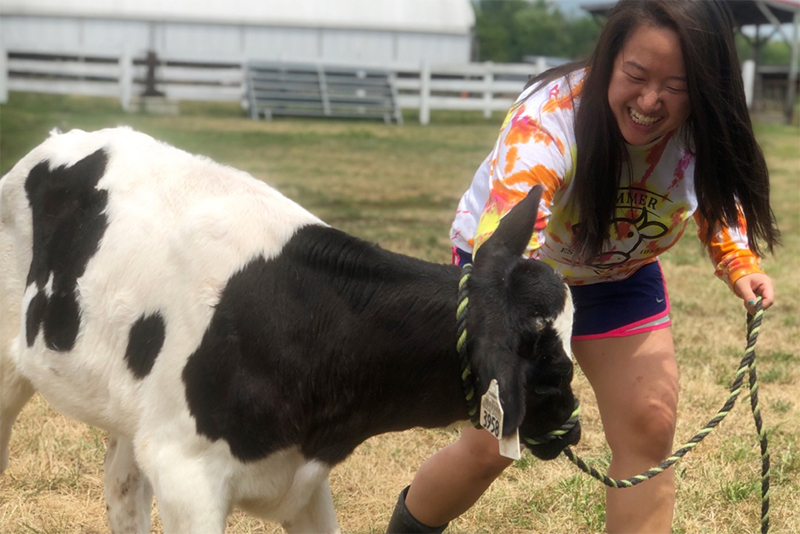 Rachel Kim '21 had worked with animals before, but not any as large as the cows in the CREAM barn, the Cooperative for Real Education in Agricultural Management. She served as CREAM president this summer. "Every little task given to you was the opportunity to learn something new." (Photo: Courtesy of Rachel Kim)

It was Rachel Kim’s day off from CREAM. As she describes it, “I was sitting in the barn doing homework. The next thing I know, I’m watching a veterinarian perform surgery on one of our cows.” Kim, who served as president of the student-run dairy herd this summer, says experiences like this meant constant opportunities to learn. “It was surprising just how accurate the statement ‘hands-on experience’ was for CREAM,” says the rising junior, a double major in animal science and nutrition & food science. “I chose UVM for many reasons, but what really drove me to Vermont was the CREAM program.” Beyond caring for the herd, Kim kept barn operations organized, and frequently consulted with faculty and advisors. After graduation, she plans to apply to veterinary school. Her time in the barn, Kim says, gave her a chance to flex skills learned in Dr. Patricia Erickson’s applied animal health course: “Since animals cannot verbally communicate their problems, it is up to us.” Kim says she’s found a second home at the barn. “While CREAM is a graded university course, the people and cows make you feel like you’ve always belonged there.” 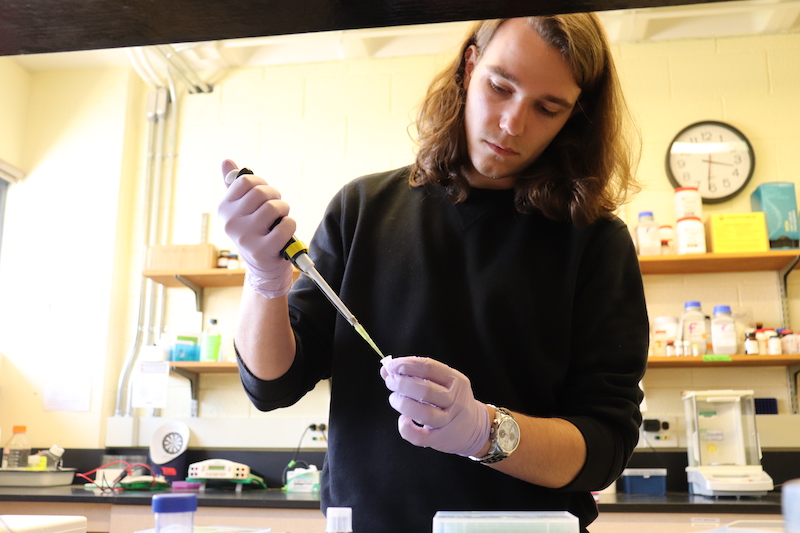 “In research, you can go in a million different directions and explore anything. The better you get at asking questions, the better you get at plotting your path,” says Joe Kajander, who is well on his way to plotting his path. This summer marks his third year in the Amiel Lab, where his current research focuses on the sugar metabolism of human dendritic cells. (Photo: Janet Franz)

This summer in Professor Eyal Amiel’s laboratory in the College of Nursing and Health Sciences, Joe Kajander ’20 cultures human dendritic cells — special cells that help activate the immune system — to investigate the mechanisms behind their sugar metabolism during phagocytosis, the process by which the cells break down pathogens. “Dendritic cells have roles in viral and bacterial infections, cancer and autoimmune diseases like multiple sclerosis,” he explains. “If we are better able to understand their metabolism, there may be ways for us to increase or decrease their metabolism to fight disease or reduce abnormal immune response.” In his third year working for the Amiel Lab, Kajander says he’s beginning to think like a scientist — an important qualification as an aspiring med student. “Getting my foot in the door early made a huge difference. Now I’m asking important questions, forming hypotheses and thinking through problems,” he says. Read more about Kajander’s research.

In many ways, Cole Green’s internship at the Vermont Small Business Development Center (SBDC) is actually a break. As a finance and accounting student with minors in history and economics, Green ’20 usually has his plate full with academics and the Global Family Enterprise Case Competition. But as a special projects intern for SBDC this summer, he was able to flex his creative muscle as he engaged with young entrepreneurs across the state and connected students with small business programs in Vermont. “It’s really difficult to start a business in Vermont, and there aren’t many people in the state to work with if you have that next big idea. SBDC is just one of several organizations that tries to keep the innovators in the state to start their business and create some jobs,” he explains. Green’s office, located in the in Vermont Center for Emerging Technologies in Burlington, also lent itself to inspiration and advice for his fellow classmates: “It’s a coworking space for entrepreneurs and remote workers. UVM students get a free membership, and they have a ton of resources to help bring an idea to life.”