Resilience Amongst the Rubble 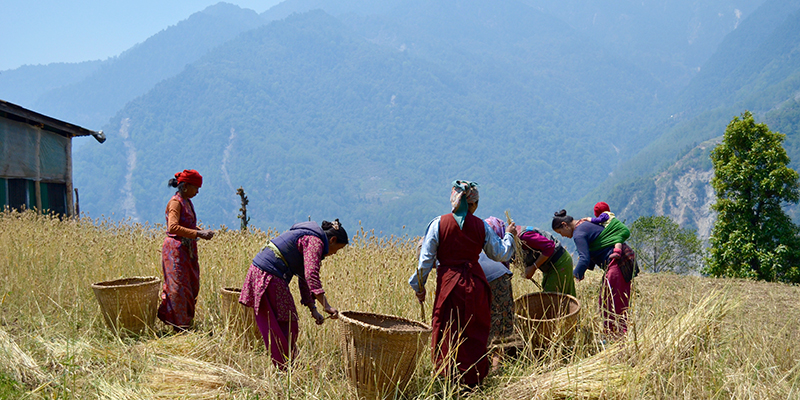 Senior Emma Squier interviewed and photographed dozens of women about their experiences following a massive earthquake in Nepal including the ones in this photo harvesting wheat in the village of Paragang. (Photo: Emma Squier)

Not long after a 7.6 magnitude earthquake devastated Nepal in April of 2015, Emma Squier sat in a classroom 7,000 miles away studying the effects of the natural disaster on the Nepali people. A year later she was living among them in the hardest hit villages learning first-hand how they were surviving.

Squier, now a senior, spent two weeks in the remote villages of Paragang, Ghangyul and Sathil interviewing 48 women for a research project about their experiences in the aftermath of the earthquake that killed 9,000 people. Many of the women from the Helambu region were left homeless, without running water or food, and little else to keep themselves and their children alive.

“The stories of the women hit me hard,” says Squier, who lived in the villages with family members of her translators. “One woman was a year younger than me and three months pregnant when the earthquake struck her house and crushed her and her unborn child. She was helicoptered out, but tragically, her baby didn’t make it. Somehow, she and the other women in the village still seemed grateful for the little that they still had. I think that’s something we could all learn from.”

Squier turned the interviews with the women into a research paper that will become part of a chapter, "The Vulnerability of Children and Women in the 2015 Earthquake in Nepal," in a forthcoming book by Springer titled, Living under Threat of Earthquake: Short- and Long-Term Management of Earthquake Risk and Damage Prevention in Nepal. Her co-author is sociology professor Alice Fothergill, an international expert on the disproportionate effects of natural disasters on vulnerable populations such as women and children.

It was in Fothergill’s "Sociology of Disaster" course that the seeds were sown for Squier's research project. When Squier decided to travel to Nepal through the School for International Training Study Abroad program, she asked Fothergill to be her adviser.

“One of the things that really struck me about Emma's work was how much rapport and trust she established with the women in the villages,” says Fothergill, author of three books including Social Vulnerability to Disasters. “She used ethnographic methods that are on a doctorate level, where you immerse yourself in another culture in a really remote setting and collect data that no one else has gathered. The data she collected is rare for any researcher, much less an undergraduate."

Bringing stories to life with photos

Squier, who minors in art that includes a love of photography, added a powerful visual element to her research by taking photos of all 48 women with their consent. She wove the images of the women throughout the eight sections of her 34-page paper: food and water; shelter and reconstruction; change of seasons; increase in workload; female-headed-households; income; education; and health.

“It was a perfect opportunity to merge my interests in sociology and photography to tell the stories of these women that many people had forgotten," says Squier.

Squier relied on prior research, current government data and information from non-profits and other organizations to provide context, but also to show whether the information matched the reality on the ground. In some cases, women were asked to clear roads blocked by landslides before they were given promised bags of rice. Some women started building temporary shelters because they could not wait for the 16 sheets of tin promised by the government, assuming they could walk many miles to retrieve it.

Overall, the workload for women, who already bore the brunt of the daily household, caregiving and agricultural-based chores, increased significantly. The absence of their husbands, many of whom had either died or migrated to try and make money elsewhere, added to the stress that Squier says sounded unbearable at times.

“A lot of the women got really emotional and would cry and say ‘no one has ever asked me about my experience with the earthquake before,'" says Squier. "But the women of Helambu are strong. They have done so much for their families and community during a time when they had very little. Much more needs to be done, but they remain hopeful taking the recovery process one day at a time. I will never forget them and how they let me into their lives during an incredibly difficult time." 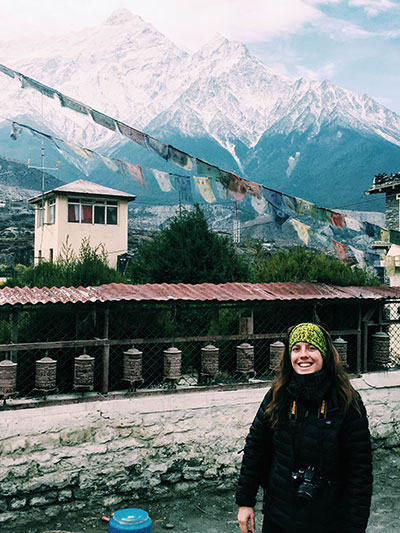 Sociology Professor Alice Fothergill teamed up with her student Emma Squier, shown here in the Nepal region of Mustang with the Nilgiri Mountains in the background, to produce a book chapter on their respective research on the struggles of women and child