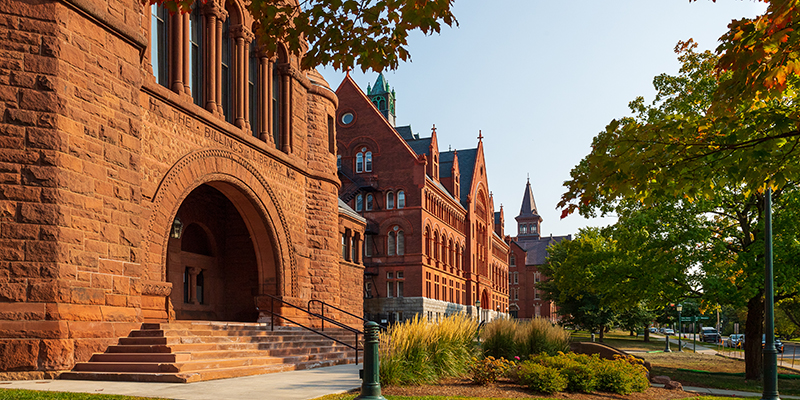 It’s been a start like no other, but the Class of 2024 is off to the races. Among the newest (masked) faces on campus this fall: a dancer, a future pilot, an LGBTQ+ activist, a basketball player, an aspiring pathologist, a singer and a microbiologist with a personal interest in the refugee crisis. We checked in with these first-year students to find out how their start at UVM is shaping up and where they hope to go in the next four years. 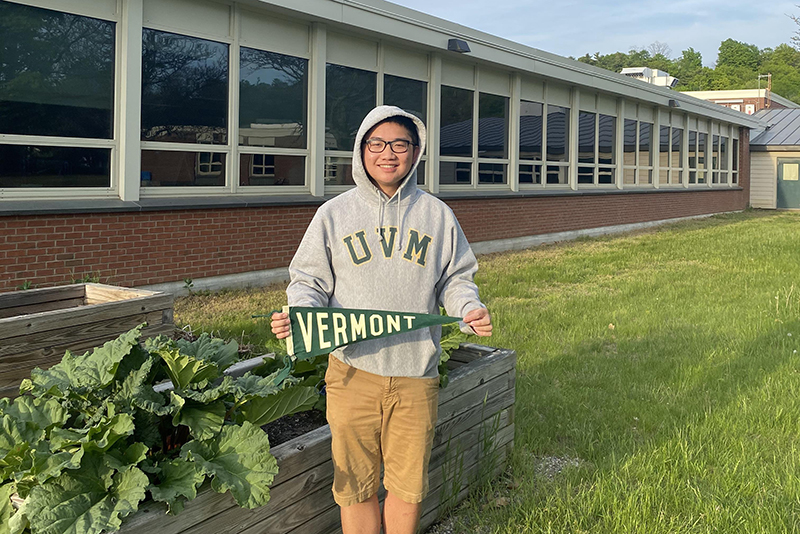 When it came time for college applications, UVM was at the top of Ryan Pham’s list. A first-generation student, Pham '24 credits a sixth-grade science class for sparking an interest in pathogens and viruses, which he’s excited to explore as a microbiology major in the College of Agriculture and Life Sciences.

As a first-year at Burlington High School, Pham got involved in the BHS International Club where he learned about the challenges and anxieties that many New Americans were experiencing in the community. The club partnered with UVM pediatrician Andrea Green to develop a symbol to raise cultural awareness and show support for the local refugee population. The “All Are Welcome” symbol — which features a dove sitting in the palms of two hands — can today be seen in storefronts throughout Burlington and as far as San Francisco. “We put it on almost everything — pins, stickers, keychains, sweatshirts,” says Pham, who, as the BHS International Club president, led the effort selling products with the symbol to raise money for organizations supporting refugee crises around the world.

Pham’s parents, who immigrated to the United States from Vietnam during the Vietnam War, have been a strong influence on his activism. “Seeing how lucky they were to be able to call this place home; I feel like other people should have that opportunity as well. And, seeing how hard they’ve worked has really pushed me to work hard.” 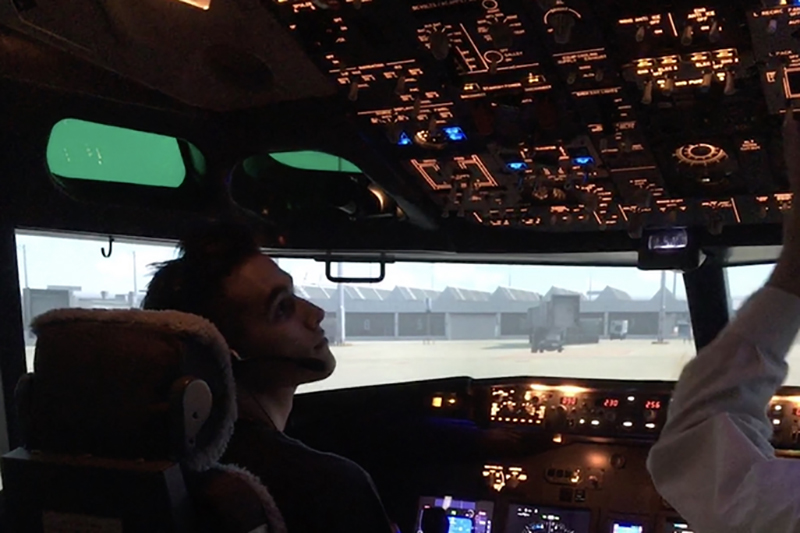 About four years ago, Fritz Gick ’24 started thinking about becoming a commercial pilot. Two years later, still in high school, he rented a flight simulator in Boston for a few hours to start practicing, “but I didn’t take it as seriously as I wanted to,” he says. So, last year, he printed out all 4,000 pages of the flight manual of an Airbus 320, “and I read it,” he says. Then he started practicing in virtual reality. Now, he’s scheduled to go, in November, to Jet Blue’s training headquarters to rent time on their full-cockpit, $15 million flight simulator on hydraulic stilts. “If I get that certificate,” Gick says, “that’s my ticket to flight school.”

“First college, then flight school,” is the career plan, which is why the Hartford, Vermont, native enrolled at UVM, majoring in engineering. “Airplanes are very technical — and I want a job that is very technical,” he says. “I chose UVM because the engineering department is really, really good,” Gick says, and he’s loving his intro courses this fall. “I’m doing all I can on the self-taught part of becoming a pilot, but there are a lot of gaps. I understand some things about aerodynamics — but I can’t explain it with math at all,” he says. In four years, Gick expects he will — and be ready for wings. 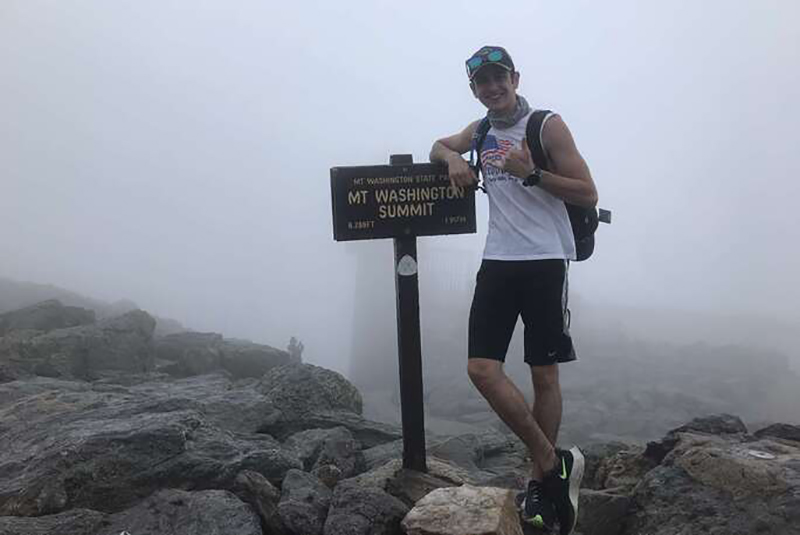 One month into college and first-year medical laboratory science student Cole Royer ’24 is hitting the ground running. About 20 to 30 miles a week, he estimates. He’s got a long way to go before he’ll qualify for the Boston Marathon like he hopes to, but he’s got four more years to train with UVM’s running club for that.

When he’s not hauling it up and down the hill in Burlington, Royer is in the lab and studying up on what a career in pathology and cancer research might look like. “There’s a lot of science in it. There’s a whole world under that microscope that you get to look at. It’s kind of fascinating to see it start small, with DNA not replicating right and then becoming a cancer cell. It starts small but is prevalent in the patient because it’s actually a big issue,” he says.

His interest in science isn’t just limited to lab work and microscopes; Royer has also dabbled with the practical application of microbiology in food. In fact, he wrote his college essay about making his own kombucha, which required growing cultures at home and learning about the fermentation process — all science. The kombucha project didn’t quite make it to the residence hall with the rest of Royer’s stuff. So, for now, he’s getting all the microbiology-fun he craves through his science classes and labs. 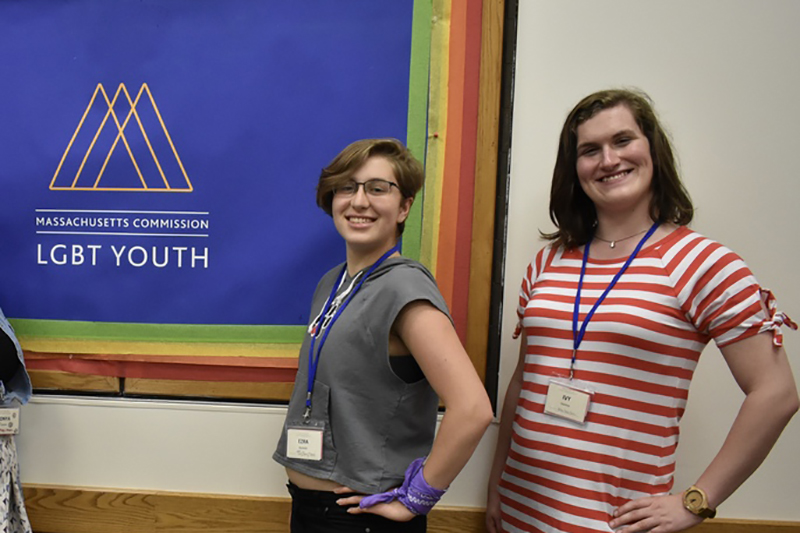 What’s it like to be a queer high school student? Ivy Stanton ’24 has brought her first-hand experience to many different stages, helping educators, legislators and her peers better understand the challenges of being a young LGBTQ+ person. “I struggled with being queer and bullying at school,” says Stanton, “but developed a passion for the issues the LGBTQ community faces.”

That passion fueled her activism; at her school in Braintree, Massachusetts, Stanton successfully led the charge to change what she describes as the “antiquated practice of graduation gown colors being assigned by gender.” Beyond the walls of her high school, Stanton presented across the state with the Department of Education to raise awareness for issues including LGBTQ+ youth homelessness and health disparities. And, she served as Vice Chair on the Massachusetts Commission on LGBTQ Youth, which works to make the state a safer place for queer young people through community outreach and policy recommendations.

“UVM’s welcoming and supportive environment drew me to the school,” says Stanton, who plans to major in English and minor in Spanish. “Here, I can be who I am without judgement from anyone; in fact, everyone values diversity and people’s different identities.” Her favorite classes so far? British literature with Chris Vaccaro and the Honors College seminar, The Pursuit of Knowledge, with Joseph Acquisto. In a few short weeks, she’s also gotten involved with the Gaming Guild, Mock Trial and the Queer Student Union. “I am loving life at UVM.” 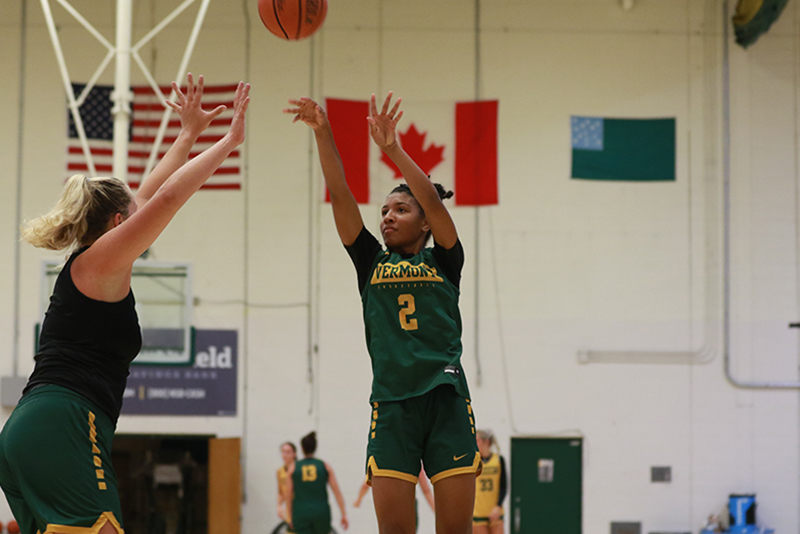 Leiya Stuart, among the first-year players for the Catamount women’s basketball team, enrolled at UVM because she wanted to be a part of an environment that embodied success — both on-and-off the court. Rhode Island’s Gatorade Player of the Year, she was also a top student in high school. She lists maintaining high honors and service on her school’s discipline council as the most significant achievements of her high school years.

Despite entering college during the pandemic, Stuart has found the transition to be seamless. “All of my professors are extraordinarily helpful and have been very accommodating,” she says. “My coaches have been very meticulous in navigating these current times and I think the team has done a really good job staying compliant to the rules while simultaneously getting after it in practice and making each other better.”

Stuart plans to major in biochemistry with thoughts of a possible next step to medical school. A minor in Spanish broadens her academic perspective. “Integrating Spanish into my schedule struck a nice balance between my STEM classes and humanities,” she says. “It’s a minor unrelated to my major but a topic that I still enjoy and is a considerably valuable skill both in and out of the workforce.” 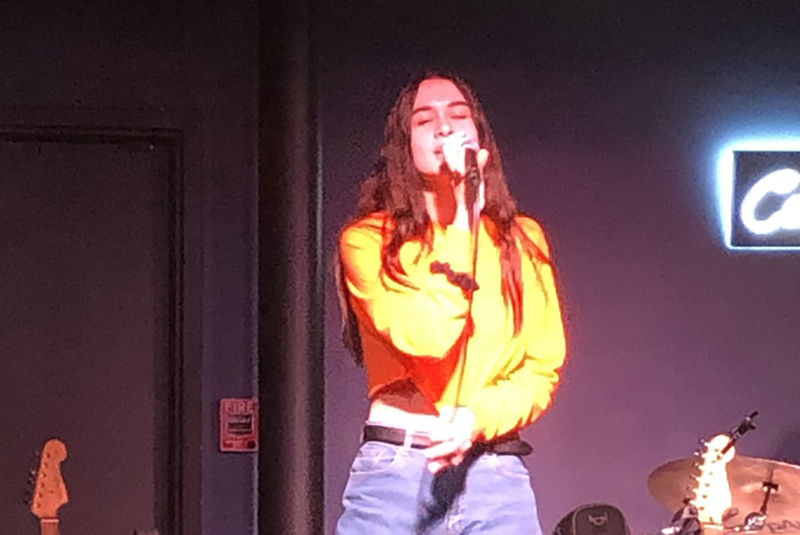 Music is central to Pearl Stuart’s life. As she chose a college, UVM rose to the top due to the rare music business and technology major, not to mention Burlington’s long-thriving music scene. As she transitions from high school to college, from her family’s home in Brunswick, Maine, to the University of Vermont campus, music creates some “the more things change, the more they remain the same” moments in her life. Stuart used to write and record music in her basement at home; now she does the same from her residence hall room.

Not missing a beat, she released her second album, “Angel,” just as school began. Stuart — who performs as simply “Pearl” — wrote, sang vocals and produced the nine tracks. Acknowledging the challenges of the times and transitioning to college, she says, “I think I landed on a successful project, though, and I see it as a natural progression from my first album.”

Her interest in music began with school choirs, then progressed from singing in the shower to noodling on the guitar to bearing down on her art. Stuart lists mega-pop-star Ariana Grande among musicians she admires for her talent, as well as her honesty.

Stuart says she considered a gap year in the midst of the pandemic, but she was primed to move forward. Noting that the social opportunities are more limited with fewer in-person classes and other safety measures, the connections she’s already found are strong. “Now that I’m here, I’m glad I came,” she says. “The friends I’ve made are amazing, and I know I just have to trust the process.” 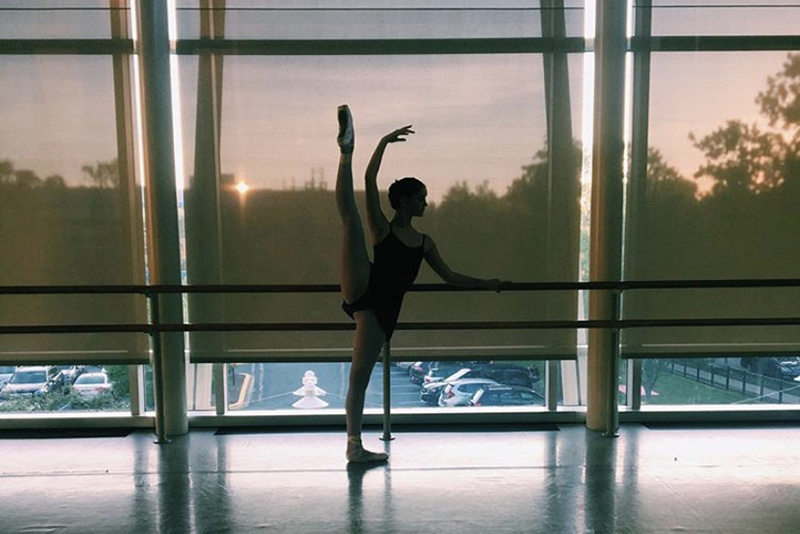 Sydney Webster doesn’t hesitate. “I am a dancer,” she says, when asked to describe herself, which almost seems an understatement considering she grew up going to school at the American Ballet Theater and the Washington Ballet, in Washington, D.C. But she’s also deeply interested in global health — and aims to be a doctor. “I’m pre-med too,” she says.

Her junior year in high school, she transitioned from professional ballet training to “more contemporary and modern styles,” she says, taking part in convention dancing. “It’s like a three-dance workshop,” she explains.

She fell in love with UVM the moment she got onto campus for her first tour. “When I got here, I knew this was it,” she says. Now that she’s living on campus, “it’s exceeding my expectations — it’s so beautiful and Vermont people are amazing.” She’s already joined UVM’s Orchesis Dance Company and started to practice. “I’m a newbie, so I don’t know much about it yet, but all the dancers are super nice,” Webster says, describing how the women in the group share a studio on Trinity Campus, “fifteen at a time, and we all wear masks and dance in our own squares.”

Webster learned a lot by training for ballet, “about hard work and a work ethic and time management,” she says, “but there’s also the toxic part, which is, like, eating disorders and stress.” Now that she’s in college, “dance is not as important to me as it was when I was growing up — because it was my entire life — and now I do it because I love it. I’m excited to see where this year takes me.”