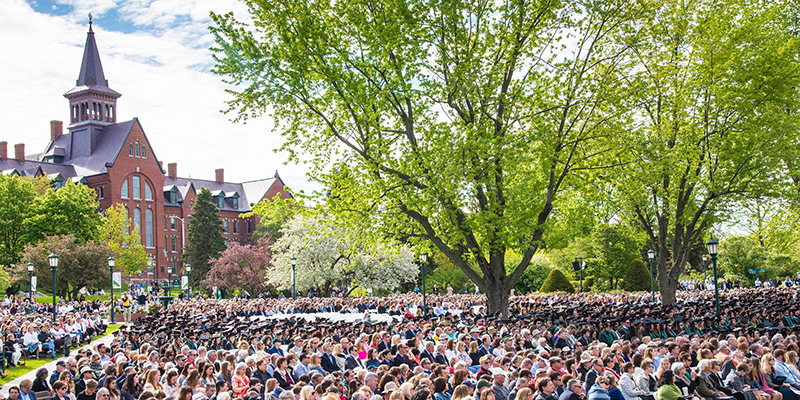 The 217th Commencement Ceremonies for members of the Class of 2018 happen Saturday, May 19 and Sunday, May 20. (Photo: Josh Brown)

As UVM prepares to award more than 3,000 master's, doctoral, baccalaureate and honorary degrees, read on to meet just a few of the standout students in the Class of 2018. 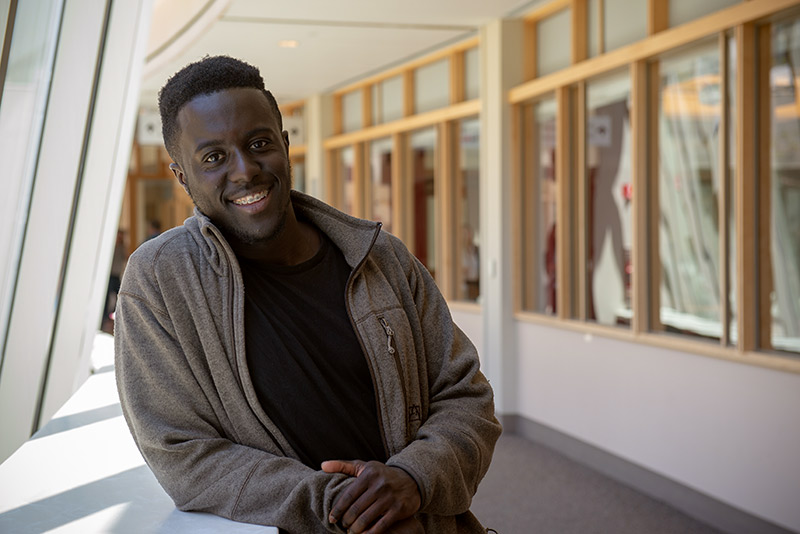 Warrick Sahene is on the fast track: soon after graduation, he’ll work toward earning his accelerated master’s in pharmacology at UVM (he’s already started taking graduate-level courses), and eventually plans to apply to medical school. The neuroscience major did research with Professor Jom Hammack, examining how exercise and stress work in specific areas of the brain. “It’s helped me understand a problem-solving approach to clinical problems,” Sahene says. A New Jersey native, Sahene dove into student life, including as VP of the Boulder Society, a senior career peer mentor, and as president of the Minority Association of Pre-Medical Students. Read more about the research of Sahene and fellow undergraduates. 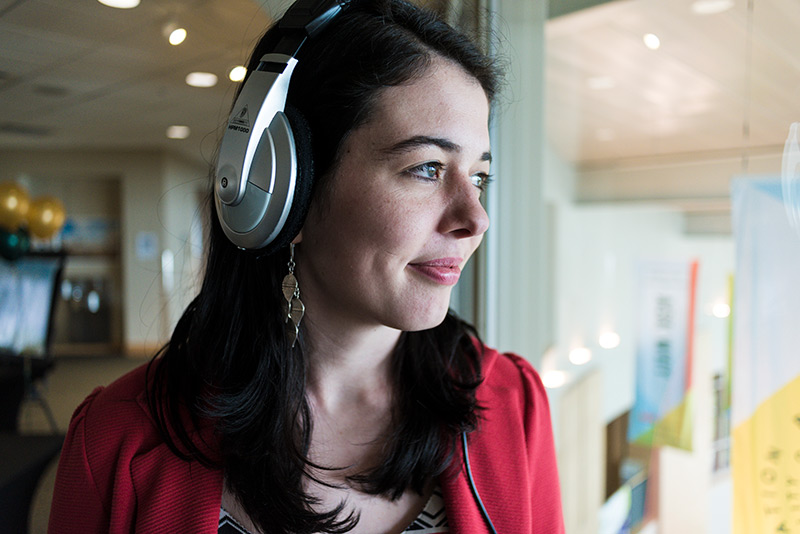 Tilden Remerleitch’s honors thesis project couldn’t have been in a more of-the-moment format: she produced a podcast. The six episodes feature stories of refugee resettlement in the state. “I just hope people can listen and find ways to connect,” says Remerleitch. Assisting Professor Pablo Bose in refugee resettlement research “made me curious about the people behind the statistics and maps,” she says. The geography major honed her skills with internships, ethnographic research projects, and a study abroad in China, thanks to winning a nationally competitive Critical Language Scholarship and a Boren Scholarship. Where in the world to next? The Guilford, Vermont native is going to Ecuador for mapping and ethnographic research with an NGO that works on issues related to environmentally induced displacement. Listen to her podcast, “Grounded.” 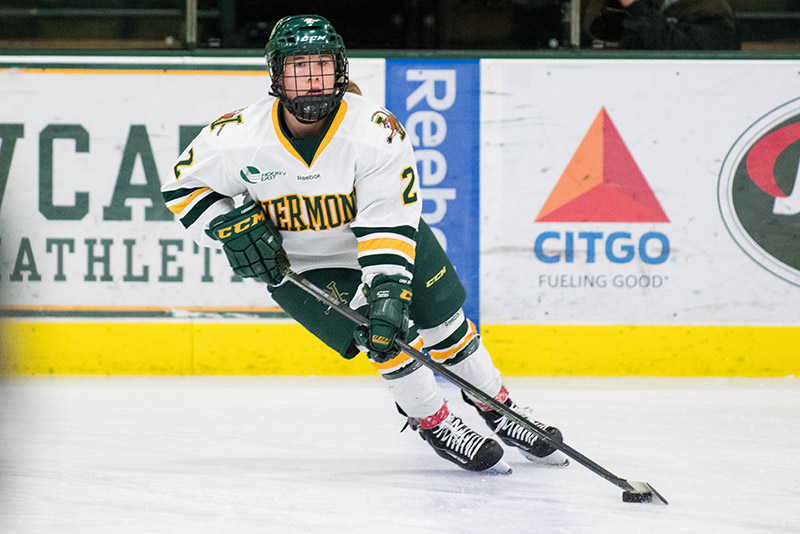 Kourtney Menches didn’t only excel on the ice with the women’s hockey team; she also maintained a perfect 4.0 GPA. The exercise and movement science major earned Hockey East’s highest GPA in 2017, served as a College of Nursing and Health Sciences student ambassador, and as a member of the Dean’s leadership council. Her skills on and off the rink earned her the 2018 Semans Trophy at the Rally Awards earlier this month. After serving as a student assistant in UVM’s athletic performance center, she scored a coveted graduate assistantship with the Arkansas Razorbacks. 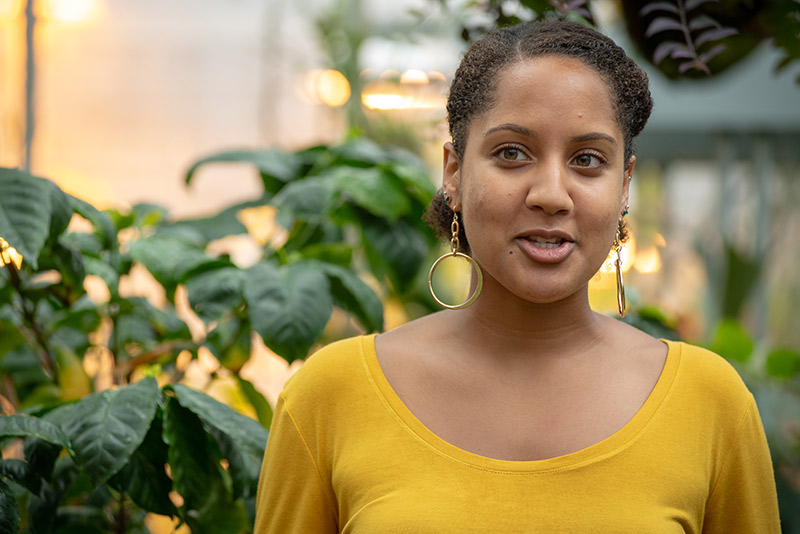 The day after graduation, Ivonne Headley will be getting right to work. The nutrition and dietetics major will be a health extension volunteer with the Peace Corps in Ecuador, where she’d like to focus on nutrition education. She’ll have a leg up since she grew up speaking Spanish, and thanks to the work she’s already done: she completed three practicum experiences and several internships at UVM, plus a research project on Spanish-speaking participants in WIC (a healthcare and nutrition assistance program) and their consumption of fruits and vegetables with faculty member Farryl Bertmann. “It helped me narrow my focus into community nutrition,” the Virginia native says. Her ultimate goal is to become a registered dietician, and eventually play a role in public policy. 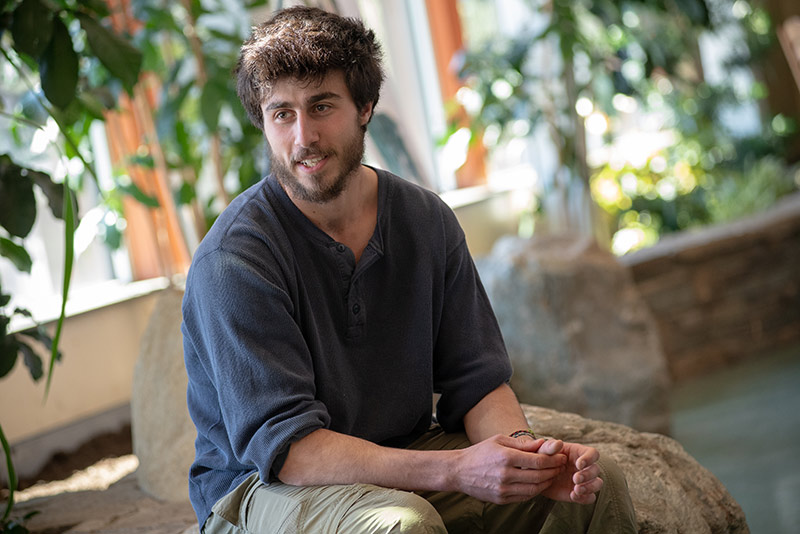 “I’ve wanted to study wolves since I was ten,” says Lucas Beck. After graduation, the wildlife and fisheries biology major will be doing just that, when he interns with the National Park Service to examine wolf predation of beavers in remote Voyageurs National Park in northern Minnesota. Vermont doesn’t have any wolves, so while at UVM, Beck studied the next best carnivore: he completed his honors thesis mapping coyote abundance in the state’s northwestern corner with advisor James Murdoch. Beck, who’s from Maryland, took every chance to explore the region as an Outing Club leader; back on campus, he served as a Rubenstein steward, part peer mentor, part tour guide, part student support. 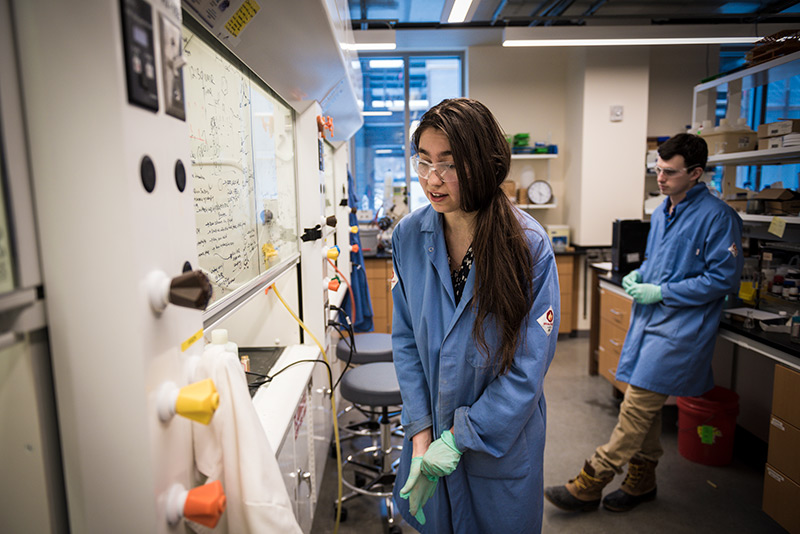 “Working in the lab can sometimes be like trying to catch a black cat in a dark room,” says Nata Dudkina, a biochemistry major and native of Azerbaijan who’s worked in Professor Severin Schneebeli’s lab since her junior year. Alongside undergraduate and graduate students, Dudkina investigated the properties of “the chemistry beyond the bond,” a relatively new field called supramolecular chemistry, building new, interesting molecular structures. Because of her experience in the lab, Dudkina applied to chemistry Ph.D. programs and will attend Yale in the fall. “My research involvement in Professor Schneebeli’s group has been a life-changing experience, and that’s not an exaggeration. I’ve never felt as intellectually involved as I am right now.” Watch Nata discuss her UVM experience.

Initially, Grace Colbert chose teaching because she enjoyed working with children. But a class, Schools and Society, with Professor Kieran Killeen revealed a deeper purpose. “It was when I realized that teaching could be a means of social justice that I truly solidified my choice on this career path.” Colbert did her Honors College thesis research with Juliet Halladay, studying reading instruction strategies and factors contributing to students’ motivation to read, and completed four different field placements and internships. The Illinois native won numerous awards, including the Student of Color Award for Academic and Social Justice Distinction in 2017. Next, she'll be a Teach for America corps member in Boston. Read more about Grace’s UVM experience. 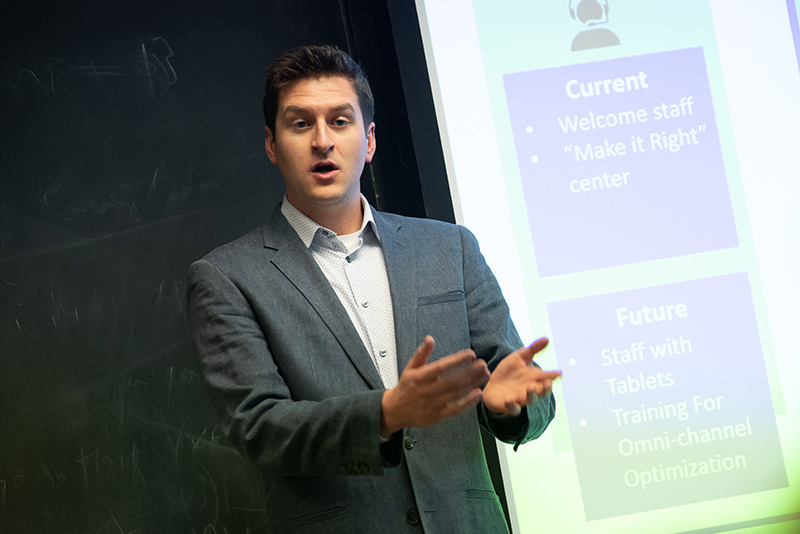 After graduation, business major JD Kelly will be headed to the Big Apple to work as an analyst with Greystone & Co., where he’ll primarily size and price commercial loans. How did he stand out from the pack? He credits three internships (two in New York City, including one with Greystone), and taking an active role as a member of the Grossman School of Business’ case competition team. “It’s something that really sets us apart from other U.S. business schools from an experiential learning and global networking perspective,” explains Kelly. 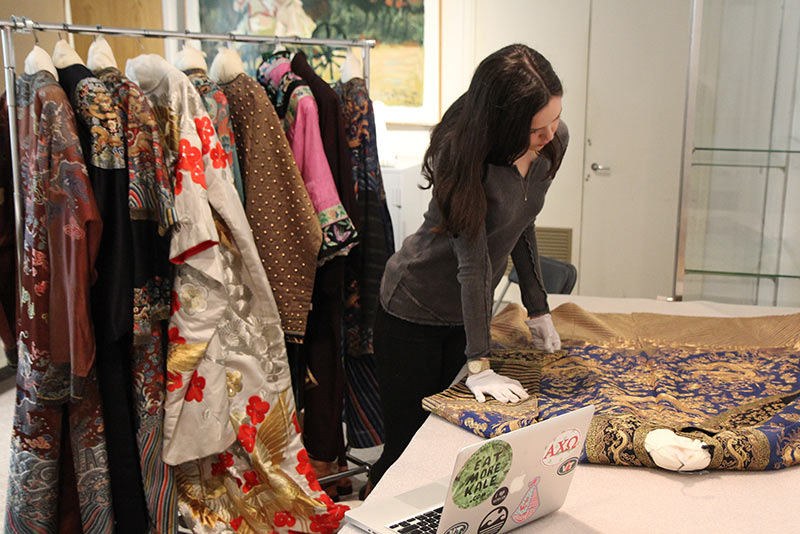 Honors College student Alaina Hendrickson, originally from Huntington, Vermont, knows UVM’s Fleming Museum from the inside out. There, the art history and French double major completed two internships with curatorial staff. “First, I researched the museum’s Chinese dragon robes for the current Asian art exhibition,” she says; next, she assisted curator Andrea Rosen in research for an upcoming exhibition, The Impossible Ideal: Victorian Fashion and Femininity, opening Fall 2018. She’ll attend American University in Washington, D.C. for her master of arts in art history. 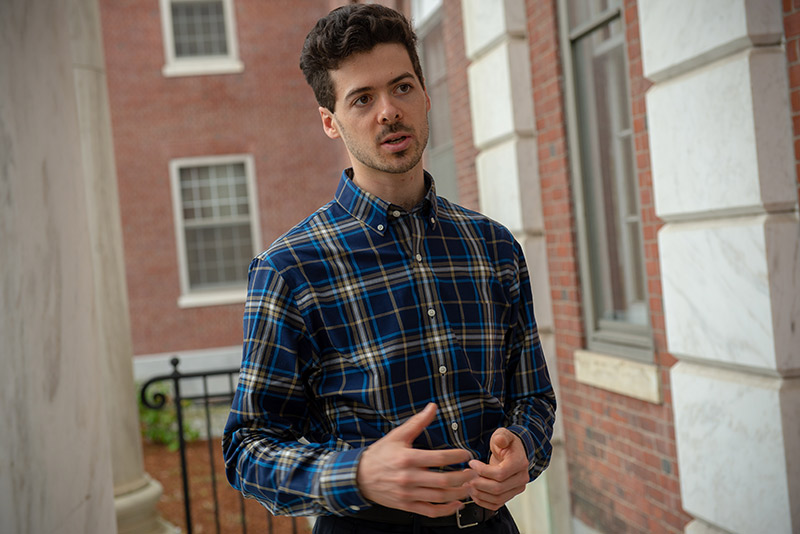 “I’m inspired by the healthcare system,” says Honors College student Caleb Winn. He quickly clarifies, “I’m inspired by the opportunities for change in the healthcare system.” Winn, a native of Natick, Mass., will stay in the area, working as an analyst for a private healthcare consulting firm, where he also completed an internship. “For an employer to get to know you, that’s the best resume you can have.” Eventually, the neuroscience major hopes to complete Fulbright research in Rwanda on improving patient compliance, or the degree to which patients follow medical advice. While at UVM, Winn founded “The Natural Philosopher,” a science news journal aimed at making research approachable for fellow undergrads. Listen to Caleb discuss his senior thesis on WBUR’s “On Point.” 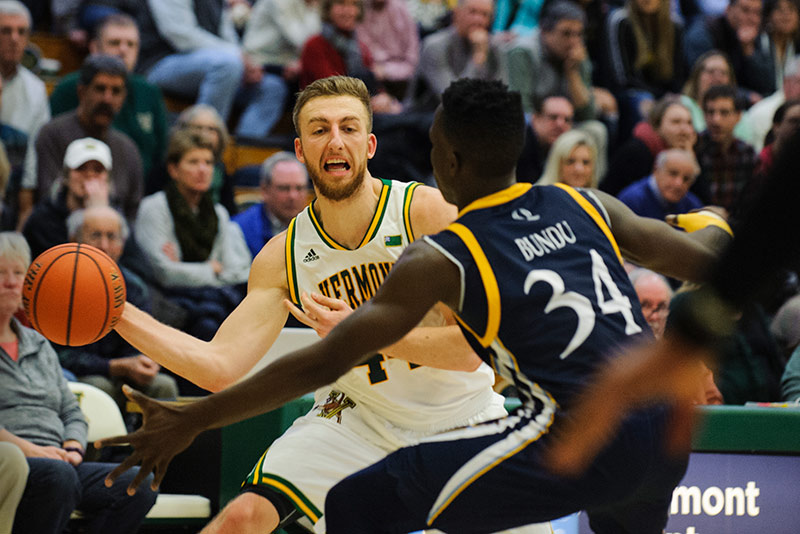 Nate Rohrer is best known for one game, basketball, but that could soon change: come fall, he’ll go on to earn his master’s of interactive technology at Southern Methodist University, the number one graduate school for video game design. Rohrer, a computer science and mathematics major, was born in Burlington and raised in Underhill, Vermont before moving to California. As a forward, Rohrer was part of the historic 2017-2018 men’s basketball team that set the America East record for most wins ever in the conference; the 2018 class' 99-career victories are the sixth-most among mid majors. 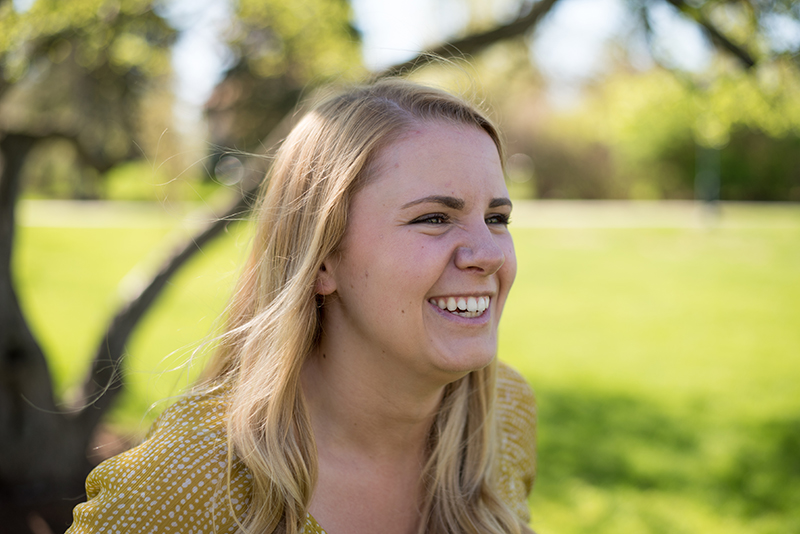 Mechanical engineering major and outdoor enthusiast Ali Gohlke-Schermer was originally attracted to UVM for the class sizes, and the proximity to the lake and mountains. But by sophomore year, she was looking for a deeper connection to her studies; she found it in the lab of Professor Ryan McGinnis, where she researched the effect of bike handlebar position on a rider’s physiological response and kinetics. She also completed an internship with nearby manufacturer Semiprobe. These experiences were key to landing a job at GlobalFoundries, where she’ll soon start as an equipment engineer. “I was super involved, and I didn’t just depend on class work.” She hopes to someday attend grad school. “This is definitely not the end,” she says. “I like to learn.”