A World to Discover 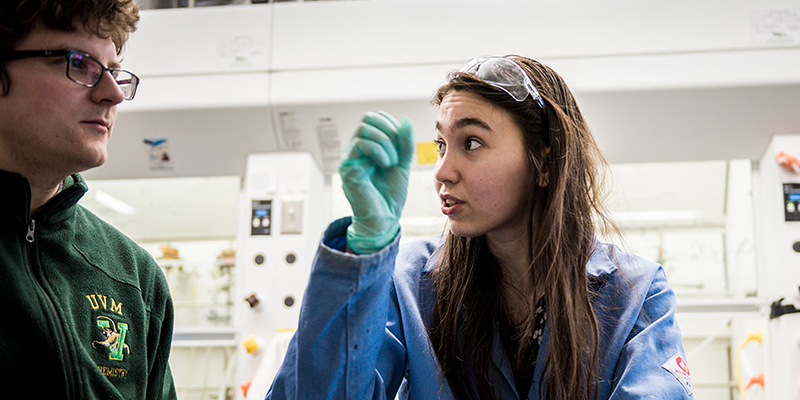 Senior Nata Dudkina, right, talks with Professor Severin Schneebeli in his lab, where she's worked for two years on a relatively new field called supramolecular chemistry. Dudkina, who's originally from Azerbaijan, will attend Yale in the fall. She’s among the 40 percent of UVM seniors who've done research with a faculty mentor. (Photos: Ian Thomas Jansen-Lonnquist)

As hundreds of students prepare to present their research at the Student Research Conference, we take a look at a few outstanding undergraduate researchers, and the faculty who've mentored them.

“Working in the lab can sometimes be like trying to catch a black cat in a dark room,” says Dudkina, a biochemistry major who’s worked in Professor Severin Schneebeli’s lab since her junior year. Alongside undergraduate and graduate students, including grad student mentor Mona Sharafi, Dudkina investigates the properties of “the chemistry beyond the bond,” a relatively new field called supramolecular chemistry, building new, interesting molecular structures. “I learned that my predictions can easily fail, even if they were built on textbook knowledge. This was unexpected, yet exciting, since it opens a new source of ideas, experiments, and even reformation of theory.”

Because of her experience in the lab, Dudkina applied to chemistry Ph.D. programs and will attend Yale in the fall. “My research involvement in Professor Schneebeli’s group has been a life-changing experience, and that’s not an exaggeration. I’ve never felt as intellectually involved as I am right now.”

For the past three years, chemistry major Tyler Jaynes has also worked in Professor Schneebeli’s lab. He began by collaborating with graduate students, and is now leading an independent research assignment on polymers. “Everything from DNA to plastic bags consist of polymers, which are essentially big structures made up of many small molecules bonded together,” explains Jaynes. His goal: to design a new method of building polymers that might be used in future materials.

“I think some of the most important knowledge this research has bestowed is that great chemistry takes time to develop,” says Jaynes. He’s developed such a passion for research as an undergraduate that he’ll be pursuing a doctorate in chemistry next year at Northwestern University. 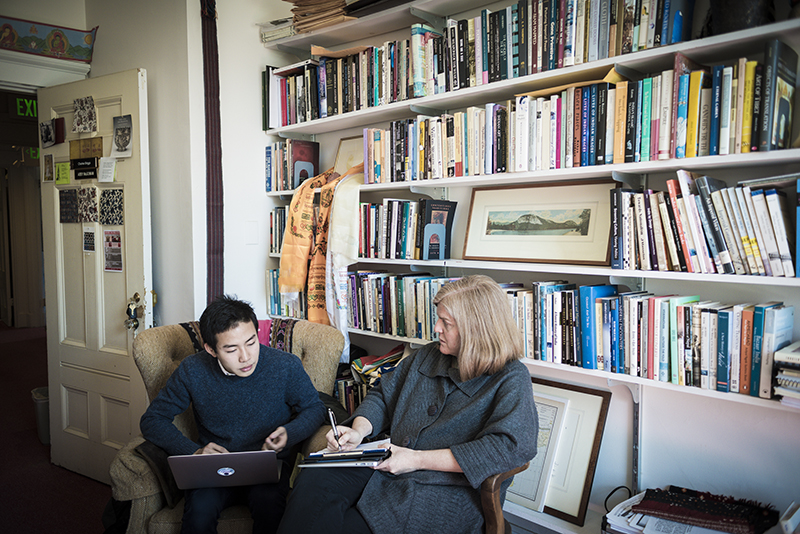 With guidance from history professor Abby McGowan, Kong is analyzing relations between India and China in regards to issues with Tibet in the 1950s and ’60s. The international student from China is in the process of trying to narrow and focus his work. “The more you dig, the more you find down there that needs to be unearthed,” Kong says.

Taylor’s research subjects are tiny. Very tiny. In Professor Jason Stockwell’s lab, Taylor studies a species of phytoplankton named Emiliania hyxleyi to better understand their role in ocean ecosystems. The sophomore chemistry major is focused on the conditions in which these phytoplankton reproduce. “They’re responsible for generating approximately 50 percent of the oxygen we breathe, so it’s important that we know how changes in ocean chemistry affect their growth,” he explains.

In his first summer at UVM, Taylor tried his hand at full-time researching as an REU student (or Research Experiences for Undergraduates, a program funded by the NSF) at Savannah State University and the Skidaway Institute of Oceanography at the University of Georgia. Says Taylor, “My time in Dr. Stockwell’s lab has demonstrated the intrinsic collaborative nature of scientific research, working with undergrads, graduate students, and faculty alike, and my experience in Georgia made me fall in love with the prospect of following my curiosity for a living.” 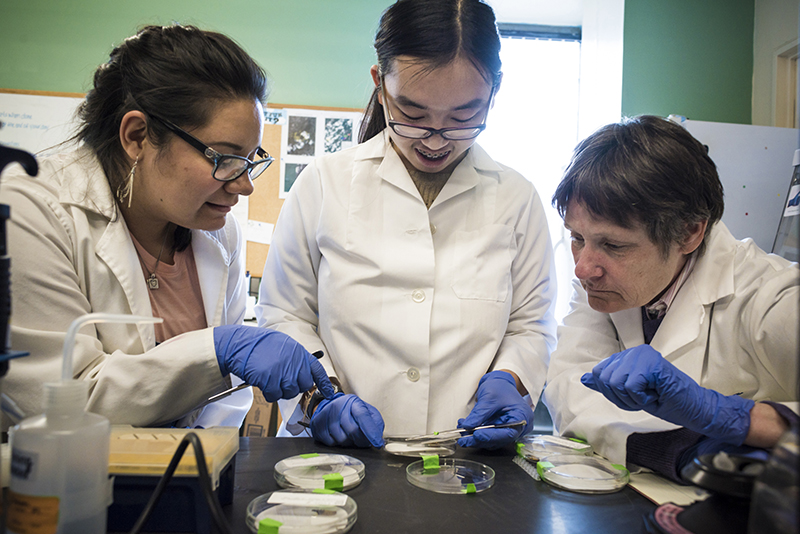 McCann is part of a Chagas disease research group led by Lori Stevens, professor of biology. Chagas is a tropical disease only found in the Americas, estimated to manifest in 28,000 new cases and 12,000 deaths annually, with approximately 70 million people at risk (WHO 2015). In particular, McCann is focused on studying genetic variation of Chagas and its etiological agent, the protozoan parasite Trypanosoma cruzi. She extracts parasite DNA from multiple species of infected insect vectors collected from locations across Central and South America, then statistically analyzes the sequence data for the major forces contributing to genetic variation within populations.

An unexpected lesson from her research experience? “It has illustrated the paramount importance of problem-solving and flexibility. For example, I experienced a challenge in my ability to problem-solve in researching a Chagas disease gene last year… In the end, while I did not find a solution to the primer issue for this gene, I acknowledged the need to persist, and I adapted by commencing research on another gene. Experiences, such as this one, have taught me confidence, time management, and personal sacrifice… Moreover, I feel even more attracted to the field of science; science embodies adversity and solving real world problems; and, I love it.”

Letizia worked with history professor Felicia Kornbluh on her research focused on the decriminalization of abortion in New York State in 1970, three years before Roe V. Wade. She read texts, seeking out relevant information and wrote up memos on her findings. The senior also joined Kornbluh on several trips to the New York State Archives to review documents. “Professor Kornbluh has been supportive of me as I begin my own thesis process and offers valuable guidance, both content-wise and logistically navigating the research process,” Letizia says.

“I've often heard people talk of the time that academics "clicked" for them, and this was certainly my experience of this. Being able to contribute to this fascinating research and work with such a knowledgeable professor solidified a deeper self-confidence in academics that I had not previously possessed. Not only did I become more confident in my capacity for academics, but I uncovered a remarkable change in attitude — for the first time in my academic career, I felt a genuine passion and excitement for the work I was doing. This shift in attitude directly translated into my classes, as I found myself navigating academics with a newfound enthusiasm for my studies and authentic desire to learn.”

Senior Sahene didn’t have to look far for a research topic: “Exercise and stress are important components in a college student’s daily life.” Under Professor Jom Hammack, director of the undergraduate neuroscience program, Sahene is studying how exercise and stress work in specific areas of the brain. “Currently, we understand that exercise causes stress resilience,” explains Sahene. “Our goal is to explore the neurobiology behind why.”

The project has enabled Sahene, who also serves as a Pre-Health advisor and Career Peer Mentor, to see beyond abstract methodology and get into the mindset of a physician, his ultimate career goal. “It’s helped me understand a problem-solving approach to clinical problems,” Sahene says; he'll start an accelerated master's degree in pharmacology at UVM in the fall. An unexpected lesson he’s taken away from research? “Patience is really important.” 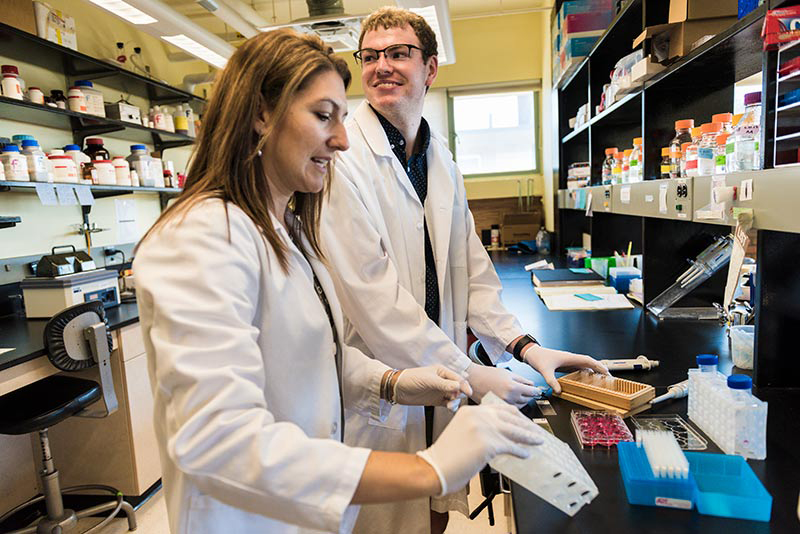 Working with professor Paula Deming, chair of Biomedical & Health Sciences, Hogan researched glioblastoma, the most aggressive form of brain cancer.  “We’re studying the mechanisms in the cell that might allow that invasive potential — with hopes of identifying a target for therapy,” Deming says. Over summer 2017 and into the fall semester, Hogan explored two proteins in glioblastoma cells, looking for the role they play in this cancer. Post-graduation, Hogan continues to work with Deming in a research and lab manager role.

“I had decided to pursue an accelerated nursing program before I joined Dr. Deming’s lab, but ultimately decided I wasn’t sure that was the path that I wanted to take. So, my research experience did influence the direction that I wanted to take post-graduation. I would still like to do something in the medical field, but I’m unsure whether that is going into a Ph.D. program or to medical school; so, I’m happy to be continuing my research with Dr. Deming while I explore my options.”

Writing for this piece contributed by Andrea Estey and Thomas Weaver.