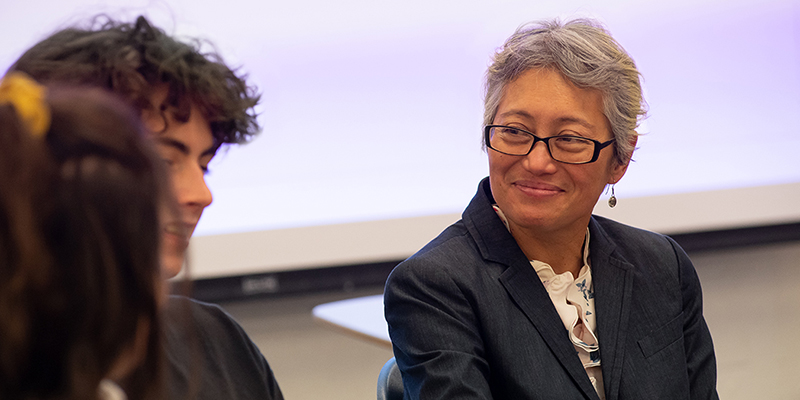 Cynthia Reyes, associate professor of Education in the College of Education and Social Services, has been named the 2019 recipient of the George V. Kidder Outstanding Faculty Award, honoring excellence in teaching and extraordinary contributions to the enrichment of campus life. (Photo: Sally McCay)

Growing up in Chicago, the daughter of Filipino immigrants, Cynthia Reyes remembers telling her parents that she wanted them to speak to her only in English, not their native Tagalog. Years later, deep regret over that choice would shape the academic focus of the UVM College of Education and Social Services professor.

“There wasn’t a push to value their heritage and their culture,” she says. “There’s a sadness about it. I consider it a loss. I really felt that during my graduate school years and when I began taking classes in education and when I began studying in the teacher education program. I just thought more and more about the experiences that students—particularly immigrant students—have when they enter the school and they want to learn how to speak English but it’s really hard to maintain the language of their parents. There’s a lot that can’t be exchanged through a second language. It’s definitely an asset—it’s a resource—and when you lose it, there’s something really profound about that.”

A UVM faculty member since 2003, Professor Reyes has made language, literacy, and its impact on identity a central focus of her work as a researcher and teacher. The UVM Alumni Association honors her with the 2019 George V. Kidder Outstanding Faculty Award, which recognizes “excellence in teaching and extraordinary contributions to the enrichment of campus life.” On Monday, Sept. 23, Reyes will deliver the annual Kidder Lecture. Her focus: “When Caring is not Enough: Reaffirming Pedagogy for Culturally and Linguistically Diverse Students.” The talk, followed by reception is at 5 p.m. in Alumni House, Silver Pavilion.

Across the years, Reyes’s work has directly influenced the lives of students in local school districts with diverse populations of new American students, many of whom have come to the area through the Vermont Refugee Resettlement. Partnering with fellow CESS faculty Shana Haines and Barri Tinkler, Reyes has also led the development of an undergraduate minor in education for cultural and linguistic diversity.

“We need to open up conversation in schools so there are no misunderstandings,” Reyes says. “There are so many issues and racial inequities—especially about children and families who speak another language other than English. When the mantra out there is ‘build that wall,’ it’s just so unwelcoming, and it’s really threatening in many ways to families. So, I feel like when I’m speaking up about the work, it’s really the families and children we want to highlight—not as a burden or as deficits, but as assets.”

As Reyes prepares for her Kidder Lecture, she anticipates including a strong plug for building the ranks at the front of classrooms in Vermont and nationwide. “I’m definitely going to extol the virtues of teaching!” she says. “As a field, it doesn’t receive enough positive recognition, and I want to get into why people should go into teaching—it is a vocation.”