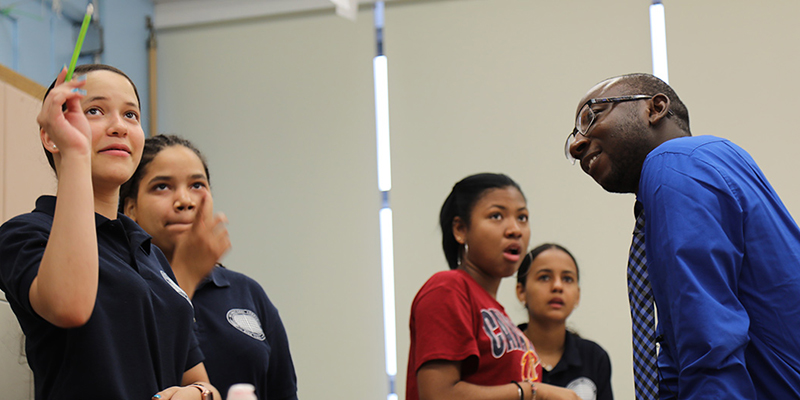 Alhassan Susso’s journey to New York State Teacher of the Year began in his native Gambia; at age sixteen, he emigrated to the U.S. His high school in the South Bronx serves a diverse population of recently arrived immigrants, where a program he founded and leads has boosted standardized test results and propelled many students to college. (Photo: Becky Miller, NYSUT)

In Alhassan Susso, the new American students at International Community High School in the South Bronx have an empathetic and inspiring role model, a history teacher with a personal history that mirrors their own.

Susso’s journey to his selection as New York State Teacher of the Year for 2019 began in his native Gambia, where he grew up in poverty and coped with a rare degenerative eye disease that would blind him in one eye. At age sixteen, he emigrated to the United States to join an older brother in Poughkeepsie. His roots as a history teacher, he says, rest in his family’s heritage across generations as “griots,” oral historians in West African culture.

Today, Susso commutes two hours by train from Poughkeepsie to his NYC high school, which serves a diverse population of recently arrived immigrants. His presence alone conveys the message that circumstances do not necessarily define destiny.

“Inspiring Teens,” a program that Susso founded and leads, is a key reason for his NY Teacher of the Year honor. The voluntary extra hour before school focuses on skills such as leadership, financial management, and communication, seeking to develop well-rounded individuals prepared for higher education or a solid job after high school. The program has resulted in a boost to standardized exam results from 29 percent to 69 percent in one year with a pass rate of over 90 percent. All of the students who took the program for credit went on to attend college.

Alhassan Susso is not a natural-born teacher; by his own account, his rookie year of teaching was “tumultuous.” A turning point, he says, came during summer school of that first year when most students dropped his class. The lone two remaining told him that they stayed only because they needed the credits to graduate; the others, they said, fled when they heard he was the teacher.

“When you hit rock-bottom is usually when you wake up,” Susso says. Distraught and looking for distraction on the Metro-North ride home that day, he happened upon a video of Oprah Winfrey’s 2013 Harvard commencement speech in which she described a low point in her own life and the soul-searching and life reset it motivated.

Reflecting on his failed teaching, Susso came to feel that he fell short because he lacked the ability to forge a personal connection with his students. “While I was very passionate about making a difference in the lives of my students, the skill I was lacking was the skill to cultivate and nurture relationships,” he says. “In order for you to be able to influence somebody you first have to reach them on a personal level.”

It would be a busy summer as Susso and his wife cared for their new baby daughter, he soldiered on with teaching summer school, and began immersing himself in learning how to better connect, the foundational step to making himself into the teacher he wanted to be.

Student to teacher, Susso had no problem building relationships at UVM, where political science faculty remember him with fondness and reverence. (He enrolled at the university when he and his wife moved to the area for her job with IBM.)

During his first year of college, Susso’s parents struggled to get his sister to the United States for better treatment of Hepatitis B. Unable to obtain a visa, she passed away in Gambia. The experience made Susso begin to consider immigration law as a career path. But after a conversation with Professor Lisa Holmes, his advisor in political science, he took to heart her suggestion that teaching might allow him to help more people at a pivotal point in their lives.

As that advice has found form with “Inspiring Teens” and been celebrated with the New York Teacher of the Year award, Susso now has a platform and a megaphone to share his ideas about motivating young people and increasing opportunities for new Americans to succeed in college. Reflecting back on Professor Holmes’s advice and the path it set him upon, he shares a quote of Nelson Mandela’s that is a personal guidepost: “Education is the most powerful weapon which you can use to change the world.”

College of Arts and Sciences
College of Education and Social Services