Graduating into the Freshman Class 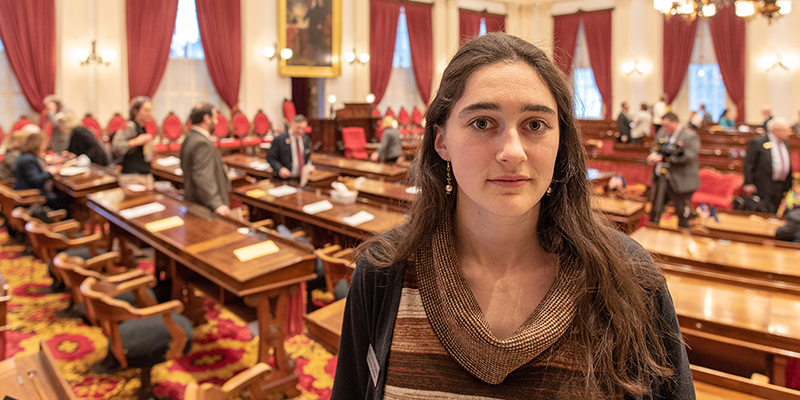 “What did I most want to do after I graduated from UVM?” asks 2018 biology grad Lucy Rogers. “I wanted to go back to work in my hometown.” Rogers launched her campaign to represent her home district in the Vermont State House during her senior year (and made national headlines for playing a duet with her opponent post-debate). Now, she wants to be sure the real-world complexity and gifts of her rural district—the people and land of Waterville and Cambridge, Vt.—are taken seriously and represented accurately. (Photo: Josh Brown)

Many seniors in college wonder what they’ll do after they graduate. When Lucy Rogers '18 was a senior at UVM, she decided to try to become a freshman again — by running for a seat in the Vermont state legislature.

In the spring semester of 2018, Rogers was completing a major in biology (with a double minor in Chinese and mathematics) — and writing an honors thesis (on bear conservation) in the geography department. She’d given a cello recital. She was training to run the Vermont City Marathon. So when Rogers told her advisor and friend, geography professor Cheryl Morse, that, “in her free time,” she was preparing a campaign to run for public office, representing her home district of Cambridge and Waterville in the Vermont State House, “I just started to laugh,” Morse recalls.

In high school, Rogers got up every morning at 4 a.m. to hand-milk her cow, Zalia, and graduated at the top of her class from Lamoille Union High School. Then she went out west to help with two conservation projects, trapping and radio-collaring grizzly bears in Canada. Next, she worked on a beef cattle ranch and made birch syrup in Alaska. She came back east to enroll at Harvard, but after one year there she transferred to UVM. “There was a culture of fear of failure at Harvard — but at UVM there was a lot more freedom to be creative,” Rogers says.

“Lucy works very hard—but mostly she just leads with her earnestness,” Cheryl Morse says. “There's no guile in anything that Lucy does. She's genuine. And I think people sense that.”

Which helps explain what happened on October 10, 2018, at the public library in Jeffersonville, Vermont. There, Rogers, 23, and Zac Mayo, 29, the two candidates for the Lamoille-3 house seat in the state legislature, were holding a debate. Standard fare for election season. But after the talking was over, they did something unexpected and perhaps unprecedented: they pushed the tables apart, and Rogers got out her cello, while Mayo picked up his guitar.

“Then we played a duet,” Rogers says—of Jerry Hannan's tune “Society.” It was an expression of both candidates’ desire to uphold the unfashionable value of civility in politics. Rogers went on to win, securing 1,273 votes over Mayo’s 882. But not before the camera trucks from CBS Evening News arrived to cover the story.

Rogers was a bit nervous about being interviewed for national television—largely because she worried about what romanticized tale might be told about her rural community. “I love my town and my neighbors,” she says, looking out the window of Room 45 at the Vermont State House in Montpelier where she now sits on the House Committee on Health Care.

And her upbringing does seem to glow with bucolic charms: She was born and raised in an off-the-grid and solar-powered house in Waterville, Vt., a handsome village of 700 people, complete with covered bridge. In high school, she took over her family’s small maple syrup operation. “We did about 300 trees and have a garden and we raised turkeys for Thanksgiving,” she says. It might seem Rogers is woven into a tapestry of ideal rural life. 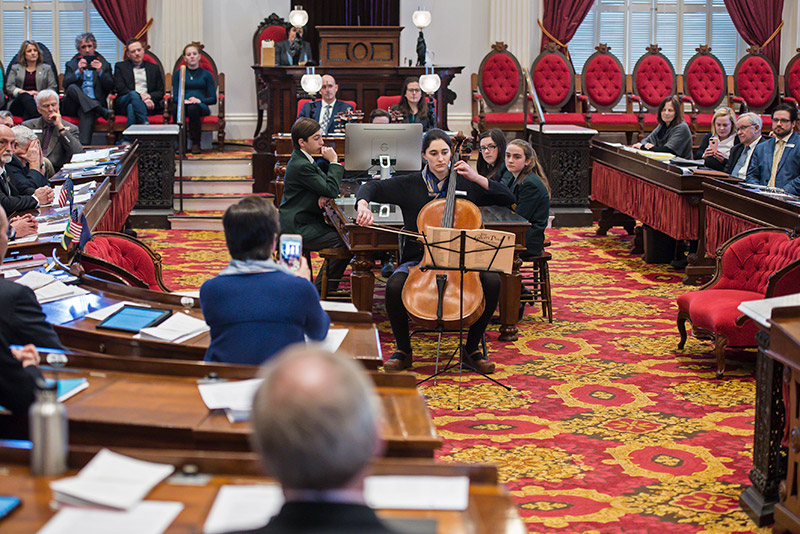 Rogers plays her cello on the floor of the State House. (Photo: Glenn Russell)

But, this fierce winter morning, as the snow hisses against the State House walls, she’s listening to hours of expert testimony about the byzantine complexities of how the U.S. pharmaceutical industry sets drug prices. And worrying about the older people in her district who have a hard time driving an hour to access healthcare let alone pay for medications. Rogers chafes at the way rural life “gets flattened,” she says, whether in the narratives of the urban evening news or in the way state legislation can “undervalue local control,” she says. “Five jobs in the city may not matter much, but in a small town they’re crucial,” she says.

“Life here is good, but not ideal,” Rogers says, reflecting some of the lessons she learned in Cheryl Morse’s geography course, "People & Nature in Rural Places." She rejects the binary myth that “either you go to the rural places to be spiritually healed and then you return to your real problems in New York City,” Rogers says, “or there’s the anti-ideal which is the ax murderer in the horror film.” Instead, Lucy Rogers wants to be sure the real-world complexity and gifts of her rural community—the people and land of Waterville and Cambridge, Vt.—are taken seriously and represented accurately.

“What did I most want to do after I graduated from UVM?” she says. “I wanted to go back to work in my hometown.”