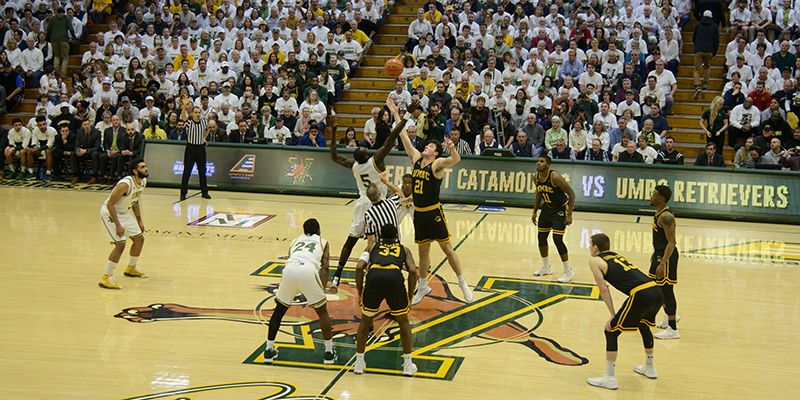 Though the salaries that come with scoring big in the NBA draft leave little for rookie players to complain about, two business school professors at UVM reimagined the current NBA salary scale for rookies in a way that financially incentivizes college athletes to graduate before going pro. (Photo: UVM Athletics)

Going pro early may be a no-brainer for exceptional, young basketball stars like former Duke freshman and 2019 NBA draft first-pick Zion Williamson. But a study in the “International Journal of Sport Finance” by two UVM sports-enthused professors proposes a new salary structure that might entice most other college players considering the NBA to graduate before trying their hand at going pro.

“Zion Williamson is a classic example of a strangely strong signal that foregoing the remaining time in college is rational—from a basketball perspective, we're not talking about his education or degrees—but from a basketball learning perspective, he had nothing more to gain from playing for Duke. So he should go to the pros and get the contract,” says Michael J. Tomas III, finance professor at the University of Vermont and co-author of the study with UVM accounting professor Barbara Arel.

Noting that the average NBA career length is just 4.8 years, Arel and Tomas reimagined the NBA’s rookie salary scale—which currently awards the highest salary to the player picked first in the draft and dwindles down with each successive player picked—in a way that considers both draft pick position and class year.

“This is our attempt to show that you could alter the NBA draft schedule to try to incentivize students to stay. There's been a big discussion about people leaving early to go to the NBA draft and I think that revolves around the idea of wanting to see them get an education,” says Tomas.

Their study proposes a pay scale that locks in salary gains as athletes advance toward graduation and incorporates yearly bonuses into their salaries determined by class year. Specifically, it offers a drafted freshman 60 percent of the current NBA rookie salary base and ratchets up to 120 percent for a drafted graduate in that same position.

Inspired by a ratchet option or cliquet option in the finance industry, the sports-enthused professors say that ratcheting up rookies’ salaries this way would ultimately “provide the incentive for players to delay entering the draft until they are ready to contribute to the NBA, but still allows an early exercise decision to remain rational for the very top prospects,” like Williamson, for example, who are likely to be picked first and go on to earn multiple contracts throughout their NBA careers. For these players, the sooner they are drafted, the sooner they can earn non-rookie salaries and contracts.

Subsequently, the researchers argue, the NBA's labor market would improve as a whole as drafted athletes enter the NBA more prepared for the professional league following those additional years of experience playing college basketball. Though the cost and burden of additional training would shift from the NBA to colleges and universities, those schools would retain top talent that might otherwise leave, while the NBA bears the brunt of the financial incentive that keeps players in college.

“With this system you wouldn't have universities that are already facing financial difficulties, trying to pay players to come and make their sports teams better,” says Tomas, adding that it also maintains the competitive landscape and possibility for underdog victories and March Madness upsets that fans have come to appreciate.

“Ratcheting Up: Adjusting the Incentives in the NBA Draft,” by UVM’s Barbara Arel and Michael Tomas, is featured in the November issue of the “International Journal of Sport Finance.”