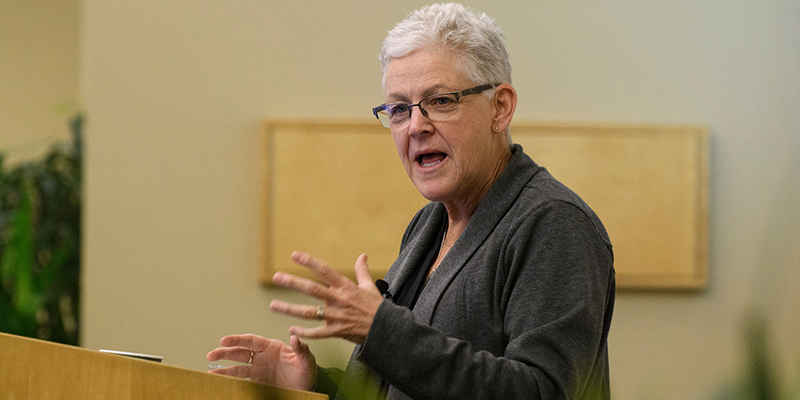 “We can’t all of a sudden think that clean air and clean water or healthy land is somehow OK if you’re a Democrat but not if you’re a Republican,” said Gina McCarthy, former head of the EPA. “There’s got to be ways that we connect with one another on our core values rather than the policies of what we're talking about.” (Photo: Brian Jenkins)

The U.S. Environmental Protection Agency's efforts to preserve air and water quality “are really, at this point, in jeopardy,” said Gina McCarthy, who headed the agency under President Barack Obama and spoke Friday afternoon at the University of Vermont. “It is very, very difficult today not to get a little bit down.”

Still, everyone must stop worrying, buck up and move forward, she told those who attended the speech, sponsored by UVM’s Rubenstein School of Environment and Natural Resources. That’s what her father would have demanded, McCarthy said.

“When I whined, he’d say, ‘Gina, pull up your big-girl pants and do something!’” McCarthy recounted in her unmistakable Boston accent. “So, I’m going to tell all of you to do exactly the same thing.”

Mincing no words and frequently jabbing a finger at the audience, McCarthy brought humor to descriptions of the bureaucratic machinations of government policy-making. Nancy Mathews, dean of the Rubenstein School, introduced McCarthy with hopes that the talk would provide “an opportunity to be inspired by what lies ahead.”

The current administration has withdrawn the United States from the Paris Agreement on climate change and approved permits for the Keystone XL oil pipeline, despite environmental concerns. On Monday, President Donald Trump announced plans to cut the size of federally protected lands in Utah, including Bears Ears National Monument, to encourage development there.

The situation, though, isn’t as dire as some fear, McCarthy said. Many hard-won rules, including those of the 1990 Clean Air Act – which McCarthy called “the most significant public health law in the history of America” – took years of negotiation, legal work, scientific study and input by the public and cannot be unraveled without the same complex steps. A mere presidential announcement via executive order can’t do it, she said.

For the most successful government initiatives McCarthy oversaw, she said, leaders overcame partisanship and embraced different political perspectives. That remains even more important amid the current divisive landscape, she said.

“We can’t all of a sudden think that clean air and clean water or healthy land is somehow OK if you’re a Democrat but not if you’re a Republican,” she said. “There’s got to be ways that we connect with one another on our core values rather than the policies of what we're talking about.”

Then again, on the topic of skepticism about climate change, often a partisan issue, McCarthy was unequivocal.

“Climate change is happening,” she said. “We have to stop debating the science.”

What worries McCarthy most, she said, is the apparent shift of current EPA leadership to give greater decision-making weight to lobbyists representing the chemical and energy industries than to the staff scientists who have spent their careers studying the areas regulated. During a question-and-answer session after the speech, McCarthy referenced some agency changes covered in a recent story by UVM alum and New York Times reporter Eric Lipton ’87, about a Trump Administration EPA deputy who is pushing to revise and weaken previously agreed regulations of toxic chemicals.

Now a professor at the T.H. Chan School of Public Health at Harvard University, McCarthy said students constantly uplift her with their enthusiasm and commitment to social justice. Not only do they yearn to preserve natural resources, she said, but also to address unequal access to those resources within low-income and minority communities.

Grassroots action can make change, McCarthy said. In response to President Trump’s stance on the Paris Agreement, more than 300 mayors of U.S. cities have signed a pledge to continue to follow the accord. States first initiated controls on greenhouse gas emissions, leading to the federal initiative.

“It was only because it happened at other levels of government that we were able to make progress,” McCarthy said.

And, of course, individuals can vote. “We can make sure that we question our leaders when they deserve to be questioned.”