Black Is the Body

Emily Bernard is a storyteller. But for years, she grappled with one particular story that she repeatedly found herself forced, rather than eager, to tell. The story about how she was stabbed by a schizophrenic man in 1994 has been shared by Bernard over and over again, usually from a hospital gurney every few years as she manages chronic pain from the attack. Now, Bernard is reclaiming that story and using it as a springboard in her new book of essays “Black Is the Body: Stories from My Grandmother's Time, My Mother's Time, and Mine.”

While her book begins with the horrifying incident when she was one of seven patrons randomly attacked in a New Haven, Connecticut, coffeehouse, Bernard’s book goes on to unpack her and her family’s experiences with race in America, having grown up Black in the south in Nashville and now living and raising two Black daughters in Vermont, one of the whitest states in the United States.

“I hope a reader will come to this book and be disarmed. And that's the reason why I begin with the stabbing, to say, ‘This is how vulnerable I'm willing to make myself, reader. Let's be together in this. I want you to feel you can be honest,’” says Bernard, a professor of critical race and ethnic studies and the Julian Lindsay Green and Gold Professor of English at the University of Vermont.

Black, Brown and the Gray Area Between

The title, “Black Is the Body,” is derived from an essay in the book about the different ways generations of Bernard’s family have lived Black in America, a theme woven throughout the book. In the essay, Bernard describes overhearing her twin daughters, who were five at the time, chat about a commercial on TV during Black History Month.

“One of them says to the other one, ‘See, we’re Black.’ And the other one says, ‘No, we're brown,’ pointing to her skin. And the first one says, ‘No. Well, yes, but they call it Black,”’ recalls Bernard. She remembers being impressed with their learning at the time, but also being struck by the fact that she had not yet taught them about race, and how different their lessons would be from hers growing up.

“I realized my introduction to the language of race was about trauma. It was racism. I learned that I was Black. I learned that I was always in danger. I learned that was I vulnerable,” she says. She likens her adolescent years and progressive Nashville community to “cogs on the great wheel of that whole machine. It was an important time, but it was also a scary time.” 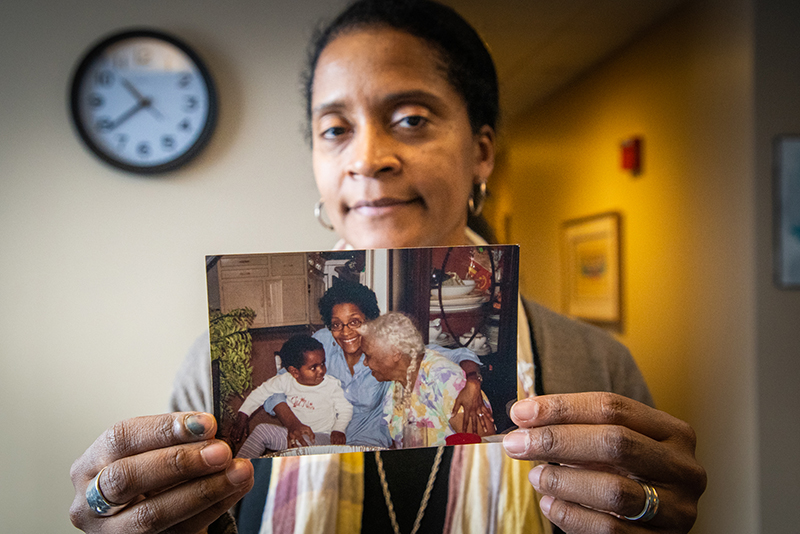 Professor Bernard holds a photo of herself, her daughter, and her grandmother. (Photo: Ian Thomas Jansen-Lonnquist)

Bernard notes the importance of “not indulging in melodrama” about the incidents she’s lived through and that there’s something to be said for incorporating humor, honesty and humanity into her work. These are also traits she strives to uphold in the classroom, where most of the students in her African-American literature courses are white.

“A lot of my students have told me I was the first Black teacher they'd ever had,” she says. With them, she’s candid about topics such as how they’d like to address “the N word” in class and the challenging material in the literature they study. “We have these very sober conversations about race, race, race, but I also want to get into the murky area of the contradictory ways that we live.”

She admits that, as a person who tackles race issues nearly every day — including when she takes the garbage out, which can make her feel like a neighborhood spectacle even after 17 years of living in the state — she sometimes makes mistakes herself about race and identity issues.

“I tell my students, ‘I understand what it's like to get older and feel that the world is going faster than you are,’ and to also feel like, ‘But I’m one of the good ones,’ and not want to be condemned for mistakes you make. I have to believe that the change is possible, because I have been changed.”

Some of the essays in Emily Bernard’s new book might make the reader cry, some might make them laugh. The author is hopeful that, in addition to her life stories being compelling and relatable, they exhibit a conversation about race, family and identity when they are read as a whole.

“I think we do a lot of talking at each other across racial divides and we do a lot of apologizing and a lot of posturing. As I say in the introduction, I like to think this book is giving something different than the conventional narrative of Black innocence and white guilt.”

Emily Bernard
Department of English
More about Black is the Body