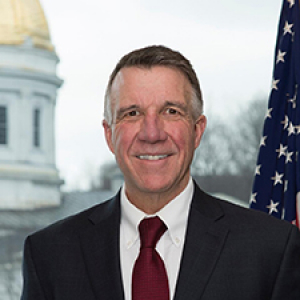 Ex-officio member of the Board upon becoming Governor of the State of Vermont in 2017. Born in Barre, Vermont. Educated at University of Vermont, BS, 1980. In 2000, Governor Scott was elected to the Vermont Senate, where he represented Washington County for five terms. During his service in the Senate, he was Vice Chair of the Transportation Committee and Chair of the Institutions Committee. He was elected Vermont’s 79th Lieutenant Governor in 2010, serving until January 2017. As Lt. Governor, he launched the Everyday Jobs Initiative, and Vermont Economy Pitch sessions, for the opportunity to learn from Vermont’s employers and workers. Through the Everyday Jobs Initiative, Governor Scott has worked in 35 different professions around the state – working alongside a host of professionals and business owners, from manufacturing floor technicians and beekeepers to emergency room workers and second grade teachers. The Vermont Economy Pitch sessions, started in January 2015, provided businesspeople the platform to pitch ideas directly to legislators on how to improve Vermont’s business climate. Many ideas from those sessions were introduced into the 2015 legislative session, several of them passed into law. In 2011, in the wake of Tropical Storm Irene, he organized the removal and disposal of mobile homes around the state, which were destroyed by the flood, all at no cost to homeowners and without spending any taxpayer dollars. Governor Scott is also active in community service projects. In 2005, he founded the Wheels for Warmth program, through which Vermonters donate tires they no longer need. The tires that meet state inspection standards are offered for resale at affordable prices, with all proceeds benefiting heating fuel assistance programs. For more than thirty years, Governor Scott was a co-owner of his family construction business, and raced the #14 car at Barre’s Thunder Road for more than two decades. He has the most career wins as a Late Model driver at the track. He is also an avid cyclist. Married to Diana McTeague Scott; they have two grown daughters, Erica and Rachael.