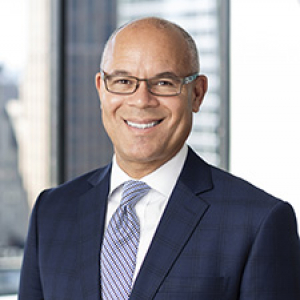 Elected to the Board by the self-perpetuating board in 2014, re-elected in December 2019 to fill a vacated term of a fellow Trustee, and re-elected in October 2021 for an additional six-year term. Term expires in March 2028. Born in St. Albans, Vermont. Educated at UVM, BS, 1983; and MBA, Harvard University, 1988. Ron Lumbra is a partner in the CEO & Board Practice of Heidrick & Struggles and based in New York. Previously, Ron was managing partner of the firm’s Centers of Excellence Americas region. Ron has more than 22 years of executive search and succession consulting experience and an extensive track record of recruiting board directors and chief executive officers to a broad variety of clients. He has deep expertise recruiting diverse talent to build corporate boards of directors. Prior to joining Heidrick & Struggles, Ron spent 17 years with a global search firm where he was managing director and co-leader of the Americas CEO and board services practice. There, he served in various leadership roles, including co-head of the firm’s Americas operations and head of both the New York and Houston offices. Ron serves on the boards of two SPACS, Propsector Capital Corp. and CRIS II Acquisition Corp, and as Board Director at CCS Fundraising. He is the former Board Chairman and current Director of KaBOOM!, a national nonprofit dedicated to creating playspaces for children. Ron also serves on the UVM Foundation Leadership Council, and was formerly a Board Director for the Alumni Association of the University of Vermont, the Harvard Business School Club of Greater New York and the Houston Youth Symphony. Married to Mitzi Lumbra; two children, Casi and Evan.