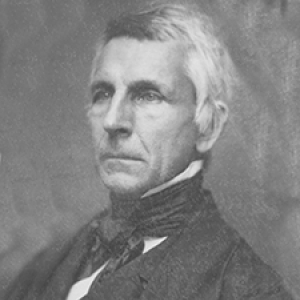 Joseph Torrey's term as president was marked by deep trouble. The university faced a financial crisis because so many students left for military service. Yet, this was also a time of dramatic change. Torrey was the last of the theologians to serve as president, and due to external events, his tenure marked the beginning of a new era. In 1865, as a result of the Morrill and Chandler acts, UVM was designated as the land-grant institution of Vermont when it merged with the newly established Vermont Agricultural College and became the University of Vermont and State Agricultural College.

Torrey was reluctant to serve as president. When the trustees elected him on September 9, 1862, he was sixty-five years old, having been born in Rowley, Massachusetts, on February 2, 1797. After graduating from Dartmouth in 1816 and Andover Theological Seminary in 1819, he served as pastor of the Congregational Church in Royalton, Vermont. He married Mary Mosely Paine, and they had a family of five children. In 1827 he was appointed professor of Greek and Latin at UVM, and following the death of James Marsh in 1842, he became professor of moral philosophy.

President Torrey was a committed scholar and an amateur botanist who accumulated a large collection of Champlain Valley plants, which he gave to the university. In 1850 Harvard awarded him an honorary degree of doctor of divinity. A man of great sensitivity and courtesy, he was more interested in teaching and in scholarship than in the practical affairs of everyday life. According to one delightful account, each morning he walked to the post office to pick up his mail since there was no general delivery in Burlington. On this particular occasion, he found a new clerk on duty who did not know him. When the clerk inquired, What name, please? Professor Torrey was so startled that he drew a blank and hastily withdrew from the window. Quite chagrined, he began to walk up Church Street. When he reached the front of Hiram Reynoldss restaurant, he met an old acquaintance who greeted him with Good morning, Professor Torrey. Torrey, Torrey! he exclaimed, thats my name! as he rushed back to the post office to claim his mail.

Although a new library building was erected in 1862, this was a difficult time. The university was decimated when the students volunteered for military service. Only six students graduated in 1865 and only three in 1866. A total of 174 UVM graduates and students participated in the Civil War, including 39 from the medical college. Nine students from the South served in the Confederate Army, one as a major general. One hundred and sixty-five were in the Union army, with two serving as brevet brigadier generals. Fifteen died in service, and six were taken prisoner.

Despite the devastation of the war, one very significant change took place at the university during President Torrey's tenure. In 1862, Abraham Lincoln signed the land-grant college act which was named after Representative (later Senator) Justin S. Morrill of Vermont. Under this act, 150,000 acres of government land, having an estimated value of $187,500, were available to support the establishment of an agricultural college in Vermont. Governor John G. Smith 41, suggested merging UVM, Norwich, and Middlebury into a single corporation to take advantage of the Morrill Act. In 1863 the Vermont legislature passed the Chandler Act, which enabled the three colleges to unite into the Vermont State University and Associated Colleges.

Both Norwich and Middlebury declined, however, and in November 1865, the Vermont legislature passed an act providing for the Union of  the University of Vermont with the new State Agricultural College. Under this act, provision was made that the successors of the original trustees should elect half of the new board, the legislature should elect half, and the governor should serve as an ex-officio member. An appraisal at that time indicated that the property of the university was worth $191,000, while notes payable, plus salaries and interest due, totaled $33,000. The new Agricultural College fund, derived from the sale of the land, was valued at $131,565. As a result, the total combined assets of the new corporation almost doubled in value.

President Torrey had suffered from very serious illnesses since 1863. After numerous requests, he finally convinced the trustees to choose his successor in July 1866. He died in his Burlington home on November 26, 1867, at the age of seventy. He had served the university for forty years and his death marked the end of an era. Three decades earlier, when Professor Torrey had returned from Europe after purchasing books for the UVM library, it was an occasion of joyous celebration for the students and townspeople of Burlington. The captain of the steamboat that carried him home fired a cannon across Lake Champlain to announce his arrival at eight o'clock on a Friday evening. The students rang the college bell and lit candles in the windows of the college buildings and in the dome of the Old Mill. One of the students described it as a splendid show with almost 1600 lights in all.

Now these earlier lights had all flickered out. Each of the first nine presidents of the university had passed away, along with many of the professors, lecturers, and tutors who had served on the faculty since Daniel Sanders was installed as the president in 1800. By 1866, the formative years were over, and a new University of Vermont and State Agricultural College was about to come into being.