Thank you for your interest in UVM Police Services. We believe that policing is as much about education as it is enforcement, and we encourage open communication in all facets of our work. UVM Police is a values-driven organization committed to serving our community through strong working relationships. We look forward to working with you.

We will be leaders in the community and the profession by employing integrated, contemporary, and innovative policing strategies to mitigate crime and increase public safety.

We are proud to serve our diverse community through the use of partnerships, law enforcement, and public education to enhance safety.

We will demonstrate our commitment to our vision and mission by modeling the following values in all our professional interactions:

Treat everyone with dignity
Be empathetic
Listen

Our Commitment to 21st Century Policing

In 2015, the White House created a task force to strengthen community policing and trust among law enforcement officers and the communities they serve. The results of a series of public listening sessions informed a new set of guidelines that are changing the focus of policing around the country. The 6 Pillars of 21st Century Policing are as listed below. To find out more, refer to the final report about 21st Century Policing (PDF).

The role of a professional organization is serving its clients; our role is serving the members of the university community. The manner in which Police Services conducts business, operationally as well as administratively, must be consistent with professionally accepted practices and ideals. The members of the university community are entitled to a professional department. It is for this reason that we have voluntarily sought accreditation by the Commission on Accreditation for Law Enforcement Agencies, Inc. (CALEA)

Accreditation is a method to ensure that UVM Police Services is in compliance with nationwide standards covering all aspects of law enforcement policies, procedures, practices, and operations. Accreditation makes a statement to other law enforcement agencies, professions, and the university community that UVM Police Services meets the highest standards of professionalism.

The Commission on Accreditation for Law Enforcement Agencies was organized through the combined efforts of the International Association of Chiefs of Police, National Organization of Black Law Enforcement Executives, National Sheriff's Association, and the Police Executive Research Forum. These organizations continue to serve in an advisory capacity to the Commission and are responsible for appointing members of the Commission's Board. The Commission was formed to develop a set of law enforcement standards and to establish and administer an accreditation process through which law enforcement agencies could demonstrate voluntarily that they meet professionally recognized criteria for excellence in management and service delivery.

The period of accredited status for UVM Police Services is three years. During this time, our agency must submit annual reports that document continuing compliance with applicable standards. Our agency has applied for reaccreditation, which will be determined by continuing the self-assessment process and successfully submitting the agency for another onsite inspection every 3 years. The achievement of accreditation for the department has resulted in improvements in structure, leadership, organization, general direction, and accountability. The process of intensive self-assessment has united the department in its commitment to serve the university community through well-written policies and procedures, objective management, and conscious recognition of the need for law enforcement professionalism.

CALEA was formed in 1979 to establish a body of standards designed to:

There are currently 444 Standards that cover:

Accreditation is an intensive effort involving the entire agency. Police Services was re-accredited in November 2019 at the meeting of the Commission on the Accreditation of Law Enforcement Agencies held in Nevada. 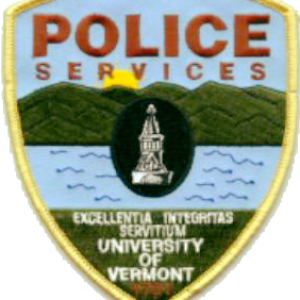 "The agency's highest award given annually to that team member who best demonstrates overall, outstanding attention to duty and exceptional service to the community."

"This award is presented to the member of the police department who, in the line of duty, performs a highly credible accomplishment, bringing public acclaim to him/herself, the department, or the police profession as a result of training, devotion to duty, demonstrating initiative and accomplishment and/or service to the public."

"Awarded to an employee who, through communication skills, demonstrates great composure, problem solving, compassion, and intelligence in resolving a life threat, or de-escalating a potentially volatile situation without having to resort to further uses of force."

"Awarded to an employee who, while in the line of duty and through prompt and alert actions, results in saving a life."

"The department’s highest award for courage and bravery. It is awarded in recognition of a single action performed by an employee who distinguishes themselves by conspicuous bravery above and beyond the normal demands of police service. To be awarded the Medal of Valor, an employee shall have performed an act displaying extreme courage while facing imminent peril."

"Presented to the team member for their contribution towards excellence in modeling our mission and values. Their contributions improve Police Services' efficiency and effectiveness."

"Presented to the team member by result of a written recommendation from any source forwarded to a supervisory personnel. Consists of commendable acts and exemplary performance by an employee that deserves greater recognition than a letter of appreciation."

"Presented to a team of employees who demonstrate an ongoing participation toward the completion of a cited action."

"Presented to community members for exemplary service or assistance to the Department of Police Services." 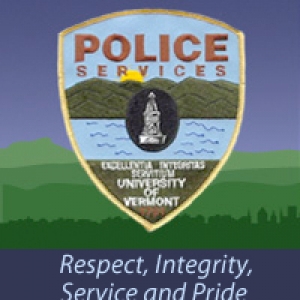 The patch represents the mission of Police Services

The sun and black, enclosed tower (Old Mill) represent our diligence to protect this community 24/7. The tower itself represents the educational mission of Police Services. The green mountains speak to the natural beauty and rugged individualism of Vermont, the namesake for this great institution. Lake Champlain sits in the forefront, its breathtaking elegance matched only by its rich, eternal history in the founding of these United States. UVM Professor Robert J. Nash provided the Latin interpretation of three keywords to our success: excellence, integrity and service. Together, they are the cornerstones of our professional obligation.

NOTE TO PATCH COLLECTORS: Due to production costs Police Services does not make our patches available.

The UVM Police Services Dress Uniform is worn for special events and by the Honor Guard. Police Services' Honor Guard is present at all major university functions including leading the platform party into the venue at Commencement. We also represent the University at police funerals, memorials, and various statewide celebrations.

The UVM Police Services Patrol Uniform is worn during daily shifts. Our officers wear external vests, allowing them to distribute the weight of their equipment. These vests help mitigate that pains and injuries that some officers incur from wearing only a duty belt.

Patrol officers also carry a variety of tools on their duty belts/vests, including:

UVM Police Services Bike Patrol wear a uniform that suits their active mode of transport. Though all officers on bike patrol will still wear a duty belt and vest, you will see them in a grey polo and dark cargo shorts.

If you have any questions regarding our uniform, or the tools we use, please contact Sgt. Melanie Waldbrise. 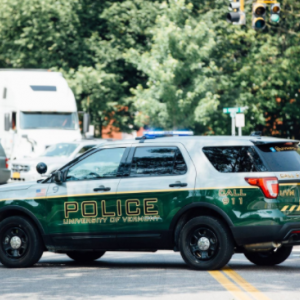 UVM Police has a fleet of SUVs. Currently, we employ both Chevy Tahoes and Ford Interceptors.

Having a fleet of SUVs allows UVM Police Services to have a greater capacity to move equipment. These vehicles also allow officers to respond to calls for service without worrying about snow, mud, or any of the many weather systems that Vermont has to offer. With these vehicles, we maintain versatility without sacrificing police-rated performance.

Our Service Officers currently drive a Toyota Tacoma. Students and visitors will see this vehicle on campus just as often as a cruiser.

We are always interested and committed to improving our services.

We hope that you'll take a few minutes to send us your thoughts.