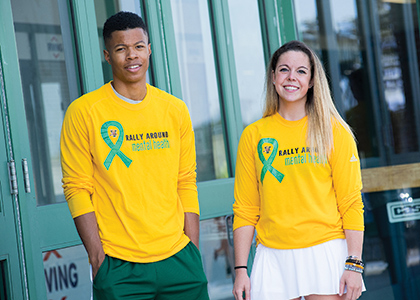 Catamount varsity athletes Kelly Lennon ’18, swimming, and Trae Bell-Haynes ’18, basketball, have their own perspectives on the power of the mind to enhance or inhibit performance, both in competition and more broadly in their lives.

Lennon, an English major/psychology minor, is frank about struggling with undiagnosed clinical anxiety issues during her freshman and into her sophomore year. “It started as a swimming thing. I was getting in my own head and it was spilling over into the rest of my life,” she says. “Now that I look back at it, I was super-anxious about really everything.” A talk with her physician was the beginning of addressing the problem, helping Lennon realize that she had an illness that could be addressed with counseling, medication, and mental wellness exercises.

As Bell-Haynes, a statistics major/economics minor, begins to talk about his own experience, Lennon shakes her head knowingly and says, “Trae is very go with the flow. He doesn’t get riled.”

Bell-Haynes cracks a slight smile, acknowledging that’s generally his way off the court, but it was a different story in games his first two years in a Vermont uniform. Basketball, like many sports, is served by a short memory—a player who makes a turnover must forget about it by the time he next gets his hands on the ball. Bell-Haynes wasn’t that player. “When I made a bad play in a game, I kind of got on myself. Then one bad play became two bad plays and two bad plays became three. And by three, I’m not playing, I’m sitting on the bench,” he says.
Mindfulness, undergirded by a meditation routine, has strengthened this aspect of Bell-Haynes’s game, helping him earn America East Player of the Year and Honorable Mention All-American last season.

In part due to their own experiences, Lennon and Bell-Haynes have taken the lead on Rally Around Mental Health, a UVM varsity athlete effort to promote mental health among their fellow athletes. One in four people struggle with some sort of mental health issue, with student-athletes being especially susceptible due to the pressures of performance at a high level. In a recent survey, 75 percent of Vermont student-athletes said a teammate or themselves struggled with mental health, while only 40 percent sought out a form of help.

Last year, the student athletes sponsored de-stress activities and a Rally Around Mental Health night at a men’s basketball game. Special warm-up shirts worn by the team were later sold to fans to further raise awareness and funds for the program. As fall semester opened, Lennon and Bell-Haynes say they anticipate similar programs this year, hoping to have other teams designate a game as a Rally Around Mental Health event. And they’ll be looking to institutionalize the burgeoning program and pass its stewardship on to fellow athletes. Lennon and Bell-Haynes are quick to credit UVM Athletics staffer Cathy Rahill and sports psychologists Ari Shapiro-Miller and Kelly Thorne for their help in establishing Rally Around Mental Health.

Annie Valentine, UVM’s coordinator of mental health education and outreach, has been another key partner. In an NBC Boston news story on the program, Valentine said the peer-to-peer initiative adds to university-wide efforts to breakdown stigmas surrounding mental health challenges—“It starts to shift the culture.”

Bell-Haynes says, “I’m definitely seeing changes with my team. It is a lot more accepting and open-minded.”

For her part, Lennon says the swimming and diving squad welcomed a number of first-year students last year who struggled with the transition. “My team knows at this point that they can come to me and talk,” she says. “I think my biggest thing is reminding them that it’s OK to not be OK all of the time. No one expects you to be, and there are a lot of other people who are going through stuff. It doesn’t mean there is something ‘wrong’ with you, it just means maybe you need a little extra help that in the end is going to make you better as an athlete and as a person.”

Three Catamount alumni and one storied coach joined the UVM Athletic Hall of Fame at the 49th annual HOF dinner on September 16 at the
Davis Center.

Corey Bronner ’07, soccer, helped lead the Cats to thirty-three wins during his years in green and gold. A two-time third team academic All-American, he was team MVP his senior year.

Craig Mygatt ’88, lacrosse, is the Vermont program’s all-time leading goal scorer, 148 through his career. As a freshman, he tallied a single-season record fifty goals.

Ed Kusiak served over three decade as UVM’s director of track and field before retiring in 2003. He earned America East Coach of the Year three times in a four-year span—1998, 2000, and 2001.