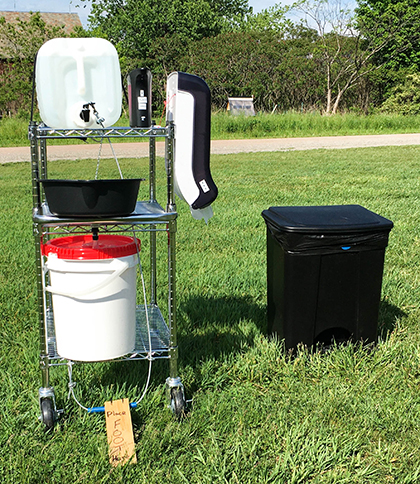 When planning to open for the 2020 summer season, the Bennington Farmers Market identified a need for a moveable, public handwashing station. UVM Extension Agricultural Engineer Chris Callahan and Agricultural Engineering Technician Andy Chamberlin evaluated commercial (expensive) products and DIY plans, and thought they could improve the product while lowering the cost. All these two needed was a weekend and a supply of readily available parts.

The goals were to develop something almost anyone could build or assemble using inexpensive and easy-to-find parts; and make it hands-free (because everyone is concerned about touching water faucets, soap dispensers and trash cans), self-supported, and portable. They incorporated input from colleagues at the Vermont Agency of Agriculture Food and Markets (VT AAFM) and the Vermont chapter of the American Association of Retired Persons (VT AARP), making the stations ADA (Americans with Disabilities Act) compliant by paying attention to the dimensions and functionality.

Callahan and Chamberlin came up with two approaches, using either a stand constructed from 2’x4’ lumber or a purchased rolling metal cart. The clean water supply is contained in a 5-gallon jug with a spigot. The spigot is spring loaded and operated by a foot pedal, or by hand for wheelchair users or individuals who have difficulty balancing.

The used (gray) water collects in either a restaurant bus tray or an oil-draining pan and drains to a second 5-gallon jug, allowing for proper disposal -- and no puddles of water at your feet! An automatic, hands-free soap dispenser provides soap without the need for touching the container. A touchless paper towel dispenser always has the towel extended which the user can grasp and pull down to get a full sheet to dry off with. A trash can with a foot-operated lid and a liner completes the station, and prevents the used paper towels from blowing away.

Callahan’s initial build was used for the first time at the Bennington Farmers’ Market on May 30, and was constructed using about $85 in lumber and materials. The automatic soap dispenser costs $35, the towel dispenser costs $16, and an appropriate trash can costs $20, so the completed station will cost about $156 in materials. Chamberlin’s prototype, based on the rolling cart, came in at about $180 in materials, but requires no carpentry, cutting, etc. and is easier to move since it is on rolling wheels. The team is eager to reduce the cost on each design, but recognizes that they already offer significant improvements for public use compared to both the inexpensive DIY approaches and self-contained, commercial station which costs about $700 and don’t offer the same functionality.

The idea and designs are getting a life of their own, surprisingly, as there is already growing interest within the state (VT AAFM, AARP, etc.). Both DIY working prototypes intentionally use readily available or easily obtainable supplies, and basic assembly or carpentry skills. The team has developed the "Improving Handwashing Stations" factsheet (four pages, PDF) which includes basic assembly guidance and a bill of materials. The concept is to make the designs and basic approach available as open-source information, and possibly obtain financial support to purchase parts in bulk quantity to bring down the cost while working with partners to distribute supplies and plans to community organizations, enabling them to build what they need for their own communities. 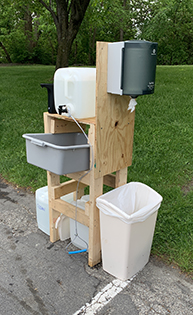