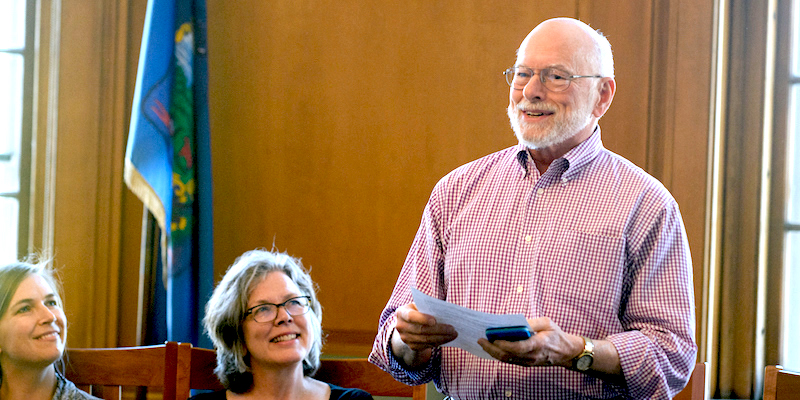 Dr. Larry Shelton, speaking at the College of Education and Social Services Scholarship Symposium at the University of Vermont.

After teaching at the University of Vermont for 48 years, Associate Professor Lawrence Shelton says his favorite part of the job is watching students’ understanding of the world blossom.

“Studying Bronfenbrenner's framework has made me a better student, researcher, and employee,” says Emma Archibald, a 2018 graduate of the HDFS program. “I think more deeply about the world around me, and make connections that others might miss.”

A Russian-born American psychologist, Bronfenbrenner developed a model detailing how the inherent qualities of children and their environment interact to influence how they will grow and develop.

“Generally, Bronfenbrenner is cited in every book on childhood development, but his work is not well explained, so it’s difficult to learn,” Shelton says. “I had been looking for something to use in class that would be understandable, and until I wrote something for my students, it didn’t exist.”

Shelton took a sabbatical 15 years ago to write a book just for his students to help them better understand Bronfenbrenner’s model, refining the book year after year. In September, Shelton took the book to the next level, publishing it as “The Bronfenbrenner Primer: Guide to Develecology” (Routledge, 2018) to share with a wider audience. It’s the first-ever print introduction to Bronfenbrenner’s Ecological Systems Framework for undergraduate students.

“I wrote the book many years ago and have used it in class with my students, and because of that my understanding of Bronfenbrenner’s work has become clearer and clearer,” he says. “It’s helped my students, too. When they go on to graduate school, they use Bronfenbrenner’s systemic framework and have an understanding of social problems in a way that other people don’t.”

From Theory to Practice

Bronfenbrenner's research and his theory were key in changing the perspective of developmental psychology by calling attention to the large number of environmental and societal influences on child development. He stressed the importance of studying a child in the context of multiple environments, also known as ecological systems, in an attempt to understand his or her development. His model was integral to the formation of Headstart pre-kindergarten programs in the United States.

“The framework is relatively simple, it’s highly generalizable, and it works. You can grasp it,” Shelton says, adding that it is also often misunderstood because “people often get exposed to theories second hand. My theory is, don’t talk about it until you read about it first,” he says. “I’ve become more convinced that Bronfenbrenner’s work is powerful. His framework has become a core thread in our program.”

Shelton says that his students learn how to become analytic thinkers using abstract principles. “There’s an intermediate step to theory for students,” he says. “Students translate their own experience into Bronfenbrenner’s framework. And they can apply the framework to other things like programs, education, and then move on to theories.”

Shelton’s next project will explore how these theories can help local schools.

“The purpose of schools is to promote development. Bronfenbrenner says the definition of development is the process of discovering and understanding the ecosystem you live in,” Shelton says. “You need motivation and skills to maintain or improve that ecosystem, and all of that happens while you are adapting to the ecosystem you are in. The question for schools is, are you helping students develop?”

Shelton describes himself as an applied developmental ecological—or "develecological"—psychologist.  His childhood and college years sparked his interest in human “develecology.”

While growing up in the Midwest, he lived with his parents and three siblings, including a younger sister who was severely disabled and died at age 7.

“I had two younger sisters. Vicki, my youngest sister who died, started having seizures as an infant. My other little sister was pretty much ignored because of what was going on. We all took care of Vicki. By the time I was 10 and until the age of 16, I took care of a very large infant. That’s something you rarely get to do as a boy or a teen. It made me a different man in the long run.”

Shelton studied at Harvard, earning a degree in social relations. While in college, he and his roommate volunteered at psychiatric hospitals, where he experienced his first interaction with psychiatric patients and received an informal introduction to how one’s environment impacts behavior.

A Passion for Teaching and Developing Students

“My teaching style is provocation and telling stories, and students probably describe me as being loose and fairly unpredictable,” Shelton says. “It’s a real privilege to watch students develop while they’re here. I love seeing their growth.”

Shelton’s current and former students speak in profound ways about the impact of their academic experience in the Human Development and Family Studies (HDFS) program.

Archibald feels that she has a much better sense of what she wants to study in graduate school. “Develecology has completely re-wired my brain. I'm starting to look at what clinical psychology faculty are studying in relation to early childhood trauma, and I always get excited when I see that they're using a devecological perspective or something similar.”

"While I am grateful for my entire Human Development education, one of the frameworks that I find myself consistently using both in my personal and professional life is develecology,” says Camera Stokes Hudson ('16), who currently works for Connecticut Voices for Children, a policy and advocacy group. “As a policy researcher and advocate on child and family issues, it is incredibly useful to have a way of thinking about issues like juvenile justice and education from a complex, multi-systemic lens. I often come back to my class notes when I am looking to understand or explain policy issues." Looking ahead, Stokes Hudson plans to attend law school.

“The HDFS program is a place where I can completely immerse myself in what I want to do and, more importantly, be, for the rest of my life,” says Claire Crowley (’19), a Simon Family Public Research Fellow who plans to pursue a graduate degree in Counseling Psychology. “The program embodies qualities of generosity, helpfulness, integrity and a closely-knit community within the larger world of UVM.”

Erica Houskeeper and Doug Gilman
“My teaching style is provocation and telling stories, and students probably describe me as being loose and fairly unpredictable,” Shelton says. “It’s a real privilege to watch students develop while they’re here. I love seeing their growth.” 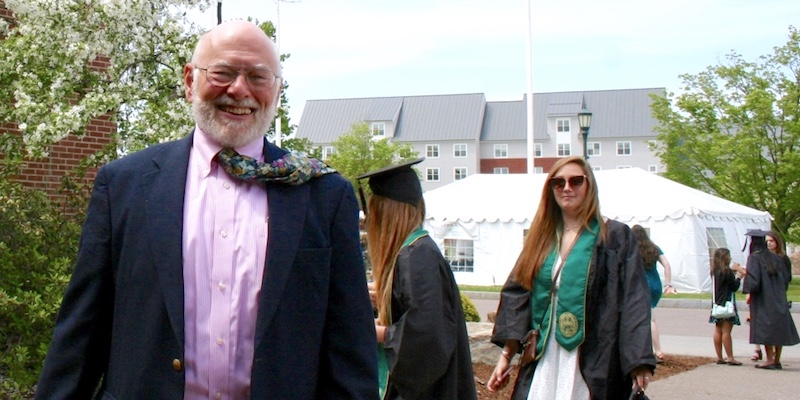