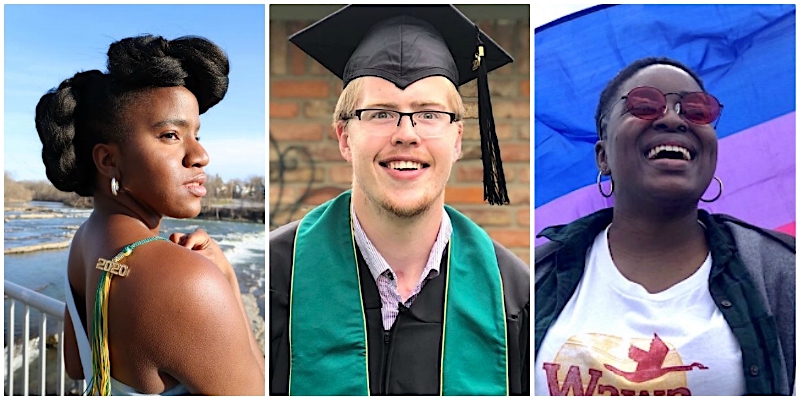 The College of Education and Social Services (CESS) community is proud to recognize three exceptional graduates who received Outstanding Student Leadership Awards from the University of Vermont. Their impactful contributions to the UVM community and beyond will endure for many years to come.

The Katherine Anne Kelly Award recognizes a graduating senior who best exemplifies Kate’s ability to bravely battle very serious medical challenges while still graduating and engaging in UVM student life with passion, energy, and a smile. This award honors Katherine Anne Kelly, Class of 2000, who passed away in 2014 following a heroic battle with Cystic Fibrosis.

One of the two recipients of this year's award is Daneil Whyte, a Human Development and Family Studies (HDFS) major from Morrisville, Vermont.

Daneil’s undergraduate career was a rollercoaster ride complicated by multiple health-related challenges. During her junior year, she was constantly in and out of the hospital with unexplained extreme chronic pain in many different areas of her body. She underwent multiple medical procedures and met with numerous medical professionals to understand the pain she was experiencing.

The fatigue and exhaustion impacted Daneil’s ability to focus, engage in class work, and her job. With her academics being so heavily affected by her health during the first semester of her junior year, Daneil was only able to finish one out of her four classes. She ended her junior year with a diagnostic surgery that confirmed her doctors’ speculation of Adenomyosis, pelvic floor dysfunction, complex PTSD, and chronic fatigue syndrome.

Despite these hardships, Daneil’s story is full of accomplishments and triumphs. She served as the publicist of the Black Student Union and advocated for the rights of marginalized communities during her sophomore year. She also volunteered at the UVM Medical Center, the Boys and Girls Club, the Discover UVM initiative, and the Dream student club. During her senior year, Daneil served as an intern at the UVM Women’s Center. She also worked for University Event Services, Student Accessibility Services, and Residential Life.

Daneil bravely faced very significant medical challenges and still excelled in her classes, engaging in many positions on campus with passion, energy, and a smile.

The other recipient of the Katherine Anne Kelly award is Josh Speidel, who graduates with a Bachelor of Science in Education as an Individually Designed major. Josh's self-designed course of study included a core commitment to promoting a more humane and just society, and helping to improve the quality of life for all individuals, families and communities. Along with his customized and interdisciplinary academic focus, he also completed minors in Coaching and Behavioral Change and Health Studies.

In February of 2015, Josh was involved in a devastating car crash during his senior year at Columbus North High School in Columbus, Indiana. The crash left him with a traumatic brain injury, and the doctors told his family he would live in a vegetative state for the rest of his life. Prior to the accident, Josh was one of the top high school basketball players in the state of Indiana.

As a commit to the University of Vermont, the basketball program immediately felt a sense of loss of their own. Although the car accident appeared to end Josh’s playing career, UVM maintained its commitment to offer Josh a full scholarship. From the time he stepped on to campus, he inspired many to be brave, embrace life with kindness and joy, and attack each day with a passion for what you love.

Over the past four years, Josh has been a dedicated member of the team, continuing physical therapy and rehabilitation while supporting his teammates. In the classroom, Josh graduated with a team-best grade point average.

In the earlier part of Josh’s career as a Catamount, he spent time furthering his education by engaging with the UVM Campus Children’s School. He also gained experience learning more about his passion for collegiate athletics as an intern with the Marketing and Promotions unit of the Athletics Department, holding a seat on the Rally Awards committee representing fellow student-athletes.

After a five-year journey, Josh got to live out his dream of playing in a college basketball game on March 3, 2020. He was introduced in the starting lineup and scored Vermont’s first basket of the game.

There was not a dry eye in Patrick Gym that night, and a flurry of national attention sparked. When asked what he thought of all of the buzz, Josh shared a simple response, “I am grateful for everything and everyone, and I want to inspire others as they have inspired me.”

One of the two recipients of this year's award is Nyria “RiRi” Stuart-Thompson. Graduating with a Bachelor of Social Work (BSW), RiRi is from Philadelphia, Pennsylvania.

Bringing one hundred percent commitment and energy to all her leadership endeavors, she inspires values-based leadership in others.

As a member of the UVM Program Board production team, she is known as a dependable, responsible, uplifting and positive contributor, serving as a role model to new student members.

In her role as an orientation leader and eventually a senior orientation leader, RiRi helped to create a safe and comfortable environment for new students and families. She was also one of the founding members of the Womyn of Color Coalition (WoCoCo) at UVM. Through her leadership and vision, WoCoCo continues to thrive, attract new members, and plan new and innovative events.

A fierce advocate for marginalized students, RiRi was actively involved with NoNames for Justice over the past three years. Working both behind the scenes and in the frontlines of the organization, she promotes a vision for creating a more just and equitable world. She served as a lead facilitator for the Next Step Social Justice Retreat, a Cultural Crossroads Learning Community Student Leader, and a site leader on Alternative Spring Break trips.

RiRi brought her passion for social justice into the greater Burlington community as well. She served as a Youth Advocacy Intern with the Spectrum Multicultural Youth Program, STEPS to End Domestic Violence, and as a driving force behind bringing the Northeast Queer and Trans People of Color Conference to UVM.

Her UVM recognition also includes the Provost's Commitment to Equity and Inclusion Award, the Sustained Commitment Award given by Student Life, and the Social and Economic Justice Award given by the Department of Social Work.

To view a listing of all senior honors and awards recipients from the College of Education and Social Services, visit the Honors and Awards page on the CESS Class of 2020 Celebration page.