Taking on Chagas disease: in the field and in the lab

New study tracks disease through DNA of the "kissing bug" 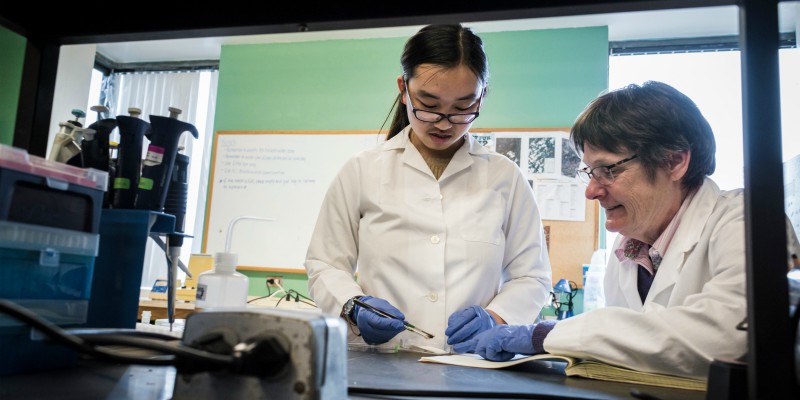 Biology Professor Lori Stevens meets with Cai McCann '19 on McCann's undergraduate thesis. Stevens is principal investigator for a National Science Foundation grant that is unravelling the mysteries of which parasites kissing bugs carry—and who or what they’re biting. Photo: Ian Thomas Jansen-Lonnquist.

Biology professor Lori Stevens spends a lot of time wearing a lab coat as she sleuths out DNA sequences found in the gut of the reduviid bug, often called the “kissing bug,” which is responsible for the spread of Chagas disease, an affliction that affects 8-10 million people in Latin America. Almost as often, she’s wearing a t-shirt in the hot Guatemalan sun, helping rural villagers who are most vulnerable to the disease learn to retrofit their homes against the insect.

Chagas is a parasitic disease caused by the protozoan Trypanosoma cruzi which is transmitted by the kissing bugs.

The insect lies low during the day and emerges at night. Kissing bugs infected with T. cruzi transmit the parasite to humans by piercing the skin—often near areas like the eyes, nose or mouth—and then defecating near the wound. The parasite, present in the feces, enters the host's bloodstream through an opening in the skin when the person scratches the itchy bite. The parasite can also be passed from mother to fetus, or through contaminated blood or even contaminated food.

Stevens says the disease often isn’t detected because the short-term symptoms—fever, swelling, aches and fatigue—resemble so many other common ailments. Those afflicted often go into remission, only to have the symptoms emerge later. Drugs are available to treat Chagas, but if the disease isn’t diagnosed early, heart disease and serious digestive problems can develop.

“Medication does a pretty good job in acute cases, but it has side effects, and drugs aren’t really an option for people who are at the chronic stage,” Stevens explains. “It’s hard to get people into treatment and one-third of patients have cardio-vascular complications by the time they are diagnosed.”

Part of Stevens’ fascination with Chagas is that while it is so widespread, it is also entirely preventable.

“Poverty is a marker for the disease,” she says. Chagas is prevalent in rural villages where homes are made of mud bricks, with dirt floors. The kissing bugs have plenty of nooks and crannies in which to hide.

Stevens and members of the research team Chagas EcoHealth have learned that education, prevention and access to early health care are important tools to stop the disease from spreading.

Early attempts to build new cinderblock homes in rural villages achieved only partial success because families tended to move their livestock into the new buildings and continue to live in their established homes. Chagas EcoHealth works with communities to develop methods that are culturally relevant to residents while reducing exposure to the bugs.

Community members receive training provided by EcoHealth with funding from a variety of sources including the US National Institutes of Health, the Canadian International Development Research Centre and the World Health Organization-Pan American Health Organization improve the dwellings by plastering the exterior and interior walls and pouring concrete floors to eliminate places where kissing bugs like to hide.

“It’s a more holistic approach,” Stevens says. “Chemical spraying by itself is not a sustainable long-term solution. We try to make the homes more resistant to the bugs using mostly local materials. The families who are physically able do the work on their home. Volunteers will help with a house of someone who's not capable of doing it themselves.”

EcoHealth has many collaborators including researchers at UVM, Loyola University in New Orleans and San Carlos University in Guatemala. Stevens, UVM evolutionary biologist Sara Helms Cahan and engineer Donna Rizzo of the UVM Engineering School have contributed to the program, along with medical entomologist Carlota Monroy and geneticist Sergio Melgar of Guatemala and molecular parasitologist Patricia Dorn of Loyola and undergraduates at each institution.

Stevens says the different perspectives provided by each member of the group is a great asset in advancing both research and on-the-ground collaboration. The trust andmespirit de corpsthat has developed between the participants—Stevens has been involved with the group since 2006—allows them to draw on each other’s strengths and resources.

“It illustrates how groups of people from different backgrounds can bring new perspectives to the table, and offer more creative solutions,” says Stevens. “The whole is greater than the sum of the parts.”

Stevens is also interested in the biology of how Chagas is transmitted. She’s the principal investigator for a National Science Foundation grant that is unravelling the mysteries of which parasites kissing bugs carry—and who or what they’re biting.

Orantes, Helms Cahan and colleagues extracted DNA from the legs and abdomens of 32 kissing bugs from Central America. By filtering out sequences common to both body parts, they discovered the insects had taken blood meals from humans and other animals, including chickens, dogs, and ducks. They also discovered  two different strains of the T. cruzi parasite.

Knowing where the bugs originate and what animals they are feeding on can help the researchers identify bug colonies that could be contained or destroyed. Even more promising, genetic technology harnessed by the team could identify particular bacteria that produce antiparasitic compounds. Kissing bugs ingesting the microbes could act as a “Trojan Horse” to kill off the harmful T. cruzi, leaving the rest of bug intact.

Previous research shows that during the spring, kissing bugs can quickly re-infest areas that have been chemically sprayed. But spraying is a short-term environmentally compromised method.

“This is a nice study because it focuses on the a potentially powerful tool that could pinpoint closely related individual bugs and identify which house they came from,” said Stevens. “Having these thousands of genetic markers gives you a high resolution picture.”

Kevin Coburn
“Poverty is a marker for the disease,” Stevens says. Chagas is prevalent in rural villages where homes are made of mud bricks, with dirt floors. The kissing bugs have plenty of nooks and crannies in which to hide. 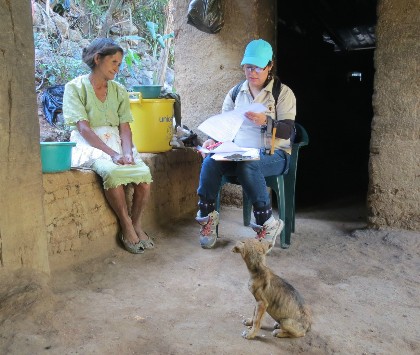