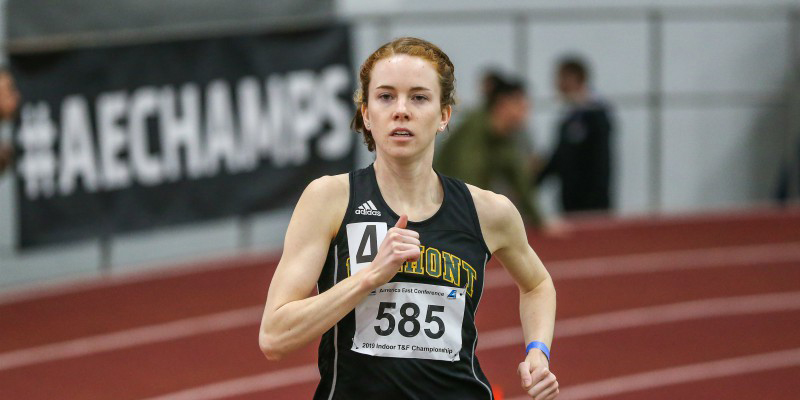 Lauren Trumble ‘19 wound up a stellar career as a UVM student athlete—she’s headed to medical school next year, and capped off her spring track season with a record-breaking first place finish in the 1000 meters in the 2019 America East Track and Field Championships.

Trumble entered UVM on a pre-med track, but one of the most influential courses was a first year TAP class “Street Children,” taught by Anthropology Professor Jonah Steinberg. The class examines the desperate experience of children around the world who are abandoned by society and left to survive on their own.

“That opened my eyes to the importance of global and community health,” Trumble said. “Jonah had this phrase ‘If other people have to live it, we should have to learn about it.’ That’s always stuck with me.”

It became a guiding principle for Trumble, who decided to minor in UVM’s anthropology in global health program which uses social science approaches to health care. It also prompted her to volunteer at Fletcher Allen Hospital, which has an inpatient ward for children with serious illnesses.

For two and a half years, Trumble paid regular visits to the hospital, playing with the children, reading to them, often just holding them. The work gave her fresh perspective on her personal challenge of balancing academics with her responsibilities as a scholarship athlete.

“In college it’s really easy to get sucked into the bubble of ‘Oh, I’ve got two papers and a test this week and how am I going to get all this done?’ Then you hold a really sick child and you realize ‘I’m actually OK.’ That whole experience was valuable for me on a lot of fronts.”

For several summers she also worked at Fletcher Allen as a patient service specialist in the neurosurgery department. She believes her experiences as a worker, a volunteer and a student have given her a broader view of medicine and the health care system. “My mother is a physical therapist, so I think she gave me a really interdisciplinary medicine perspective,” Trumble said.

Being a Division I track athlete means spending many weekends en-route to and from meets, and Trumble remembers many late-night lab reports finished on bus rides or in airport terminals.

“I learned to be a good time manager, a lesson I can take anywhere. And I received so much support, especially from Cara Calvelli (Pre-Health Program Coordinator at UVM’s Career Center),” she said. “She asks the right questions and makes sure you want to embark on this pre-med journey. She helped me with class advice, when to take MCATS, overseeing the whole committee letter process, which is a big aspect of med school applications.”

Trumble says track and cross-country practice sessions scheduled early in the morning also helped. She could wake up with her teammates, get in her workout, and have the rest of the day free for a class schedule heavy with science labs.

“I’m not sure I could have done pre-med while competing in athletics at another school,” she says.

Trumble was a three-sport athlete throughout her four years at UVM, running cross-country in the fall and indoor and outdoor track. Among her athletic highlights was an overall fourth-place finish in the America East Conference cross-country meet last fall, and setting the UVM and America East records in the 1000 meters. She also excelled in the classroom—she was named both the cross country and indoor track student athlete of the year.

With the MCATS behind her, Trumble is looking forward to stepping off the treadmill of training and just running for pleasure, or taking a morning off to hike Mt. Mansfield. UVM’s Larner College of Medicine is on the list of schools she’s applying to this spring.

“I’m a big believer in giving everything you do a 100 percent effort. But I also realize I’m a whole person, and that’s one of the reasons I was so attracted to UVM—I’m a person first, then a student, then an athlete. Now I can concentrate on being a physician.”

Kevin Coburn
“Jonah (Steinberg) had this phrase ‘if other people have to live it, we should have to learn about it.’ That’s always stuck with me.” - Lauren Trumble '19 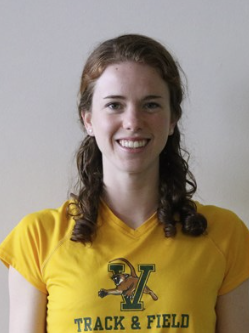