Reflecting on Thoreau's Walden in the Era of Trump 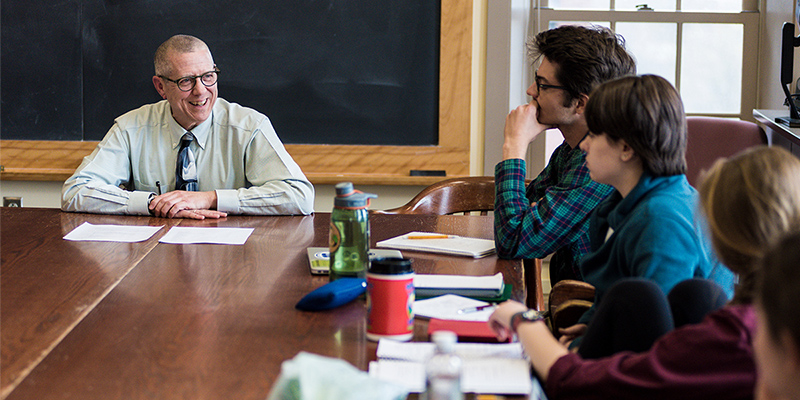 Bob Pepperman Taylor’s fifth floor office in the Old Mill looks out over the shoulders of Waterman Hall to Burlington, Lake Champlain, and the Adirondacks beyond. Near at hand on his desk is a neat stack of papers that represents the nearly final manuscript of his latest book Lessons from Walden: Thoreau and the Crisis of American Democracy recently published by the University of Notre Dame Press.

“I had never intended to be a Thoreau scholar—it just seemed to happen that way,” said Taylor whose previous books include The Routledge Guidebook to Thoreau’s Civil Disobedience and America’s Bachelor Uncle: Henry Thoreau and the American Polity.

“In my first book on environmental ethics, Thoreau represented one of the traditions I was identifying in the American discourse about environment. Then I wrote a book about Thoreau’s political ideas.”

The theme for his new book developed during a sabbatical several years ago.

“One of things I’m interested in is how democratic thinkers propose to protect democracy from its own vices,” Taylor said. “My proposal was to write a book on nature, religion, education, and populism, and how all of these have been promoted in various ways in the American tradition as protections from democracy’s pathologies. When I wrote the first chapter it became its own book about the lessons Walden gives us, the way these lessons resonate through present time in the U.S, and whether or not those lessons are useful.”

The book addresses two crises that have become especially urgent in the Trump era: threats to democratic norms and political institutions, and dangers to the environment driven by climate change.

Taylor grapples with a particular problem of democracy dating as far back as antiquity. Plato was concerned that citizens in a democracy wouldn’t have the knowledge or character for responsible self-government. The American founding fathers, Taylor says, shared the fear of the “mischief of factions.”

“Their solution was to form a republic so no one branch of government could take over,” Taylor explains. “The language of the founders portrayed a political machine that would ‘go of itself’—they were animated by the idea that we can’t reform human beings, so we need to design a political machine to correct human imperfections.”

But Taylor notes that in Thoreau’s time, the turbulent Jacksonian period, the machine was insufficient in controlling factions, which led prominent Whigs and reformers like Horace Mann to call for comprehensive public education to insure that Americans could act and vote as disciplined, judicious citizens.

“He (Mann) wasn’t alone—the idea began to emerge that public schooling was critical for democracy,” Taylor said. “Along with the Scouting movement and the Pledge of Allegiance, a little later on, we see leaders trying to promote civil virtue in a society that wasn’t very virtuous. It reflected the degree of anxiety about leaving government in the hands of citizens.”

What would Thoreau say about the latest rise of populism and threats to the environment? Taylor notes that Thoreau, the ultimate individualist who was always distrustful of political movements and parties, wouldn’t be the loudest voice in the room.

“One of the points I make is that Walden doesn’t provide prescriptions for political crisis,” he said. “Thoreau isn’t really good for helping us think about crisis management. His contribution helps us think beyond the immediate crisis, to how we can each live as more responsible citizens.”

Bob Pepperman Taylor is the Elliott A. Brown Green and Gold Professor of Law, Politics and Political Behavior at UVM. His other books include The Routledge Guidebook to Thoreau’s “Civil Disobedience” (Routledge, 2015); Horace Mann’s Troubling Legacy: The Education of Democratic Citizens (University of Kansas Press, 2010); Citizenship and Democratic Doubt: The Legacy of Progressive Thought (University of  Kansas Press, 2004); America’s Bachelor Uncle: Henry Thoreau and the American Polity (University Press of Kansas, 1996) and Our Limits Transgressed: Environmental Political Thought in America (University Press of Kansas, 1992). He received the George V. Kidder Outstanding Faculty Alumni Award in 2016.

Kevin Coburn
"One of things I'm interested in is how democratic thinkers propose to protect democracy from its own vices." - Bob Pepperman Taylor 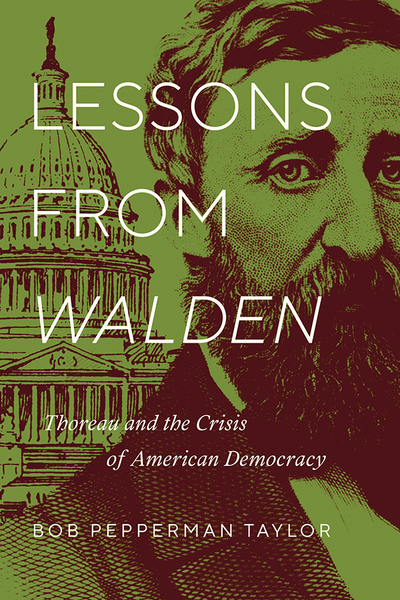