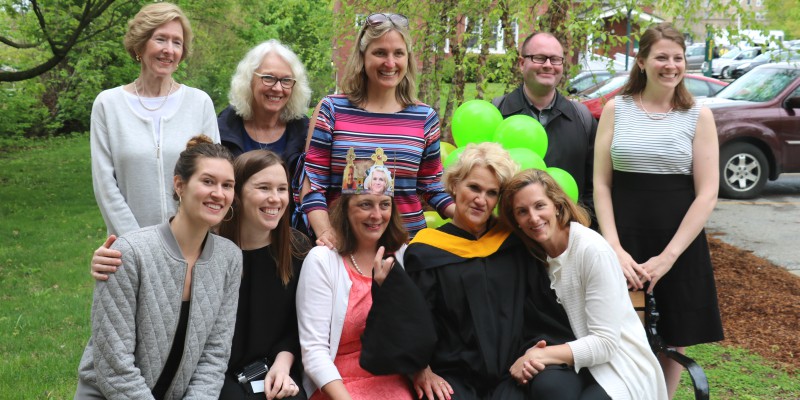 Corcoran (in regalia) sitting on "Patty's Bench" with colleagues in the CAS Dean's office.

A new wooden bench installed in front of 438 College Street bears the simple dedication “For Patty, who would always sit and listen.” It invites the kinds of conversations that happened in Patty Corcoran’s office throughout her 37-year career in the College of Arts and Sciences, which came to an end after her retirement following commencement.

With a long resume of accomplishments as CAS Associate Dean for Student Services—she played a leadership role in pioneering initiatives like The Honors College, the Teacher Advisor Program (TAP), and the Premedical Enhancement Program (PEP)—it is the personal relationships she forged with students and colleagues at UVM that stand out the most when she reflects on her career.

Corcoran grew up in Cambridge, Mass., and attended St. Michaels College. After graduation she enrolled in a UVM graduate program working under the tutelage of Professor Emeritus of Psychology Rik Musty. Right away, it was Corcoran’s people skills that stood out.

“He said ‘you know, maybe you should look into a counseling degree.’ It was fabulous that he identified that in me. And that’s what I tried to do with every student I worked with—to discover that spark that could give them confidence and insight into who they could be.”

She started studying for her MA while beginning her career in the CAS Dean’s Office where she “sat and listened” to several generations of UVM students. She learned the fine art of delivering, in her words, a “kick in the pants and a warm embrace.”

“She has such deep connections with students that last decades after they graduate,” commented longtime colleague Kerry Castano, assistant provost at UVM. “I suspect that no other individual on campus has had as great an impact on the university’s retention rate as Patty.”

Corcoran developed a reputation for being a straight shooter with students; she supported and encouraged them when she identified that particular “spark,” but didn’t shy away from gently letting students know when they weren’t ready for college.

“There are countless stories of Patty seeing a student drowning and her pulling them up by the scruff of the neck and supporting and advocating for them as they became successful,” said Ellie Miller, professor of sociology and one of nine academic deans that Corcoran served since 1981. “She could also say ‘you have some things to sort out before you’re ready for college. When you’ve done that work, let me know and I’ll be in your corner.’”

Student Stefanie Berlow of Westchester, N.Y. was one recent beneficiary of Corcoran’s guidance. When she arrived on campus as a first-year student several years ago, she had doubts about her readiness for college.

“I went to the CAS Dean’s Office and ended up talking with Patty for two hours. She told me I had what it took to succeed,” she says. “Patty was my advocate–I have no doubt I would have dropped out if I hadn’t found my way to her office.”

“She took me under her wing and we met every week to talk about my classes, what my goals were, and brainstorm how to break down problems and get back on track,” Dougherty said. “She just had a way of helping me believe in myself. She was like my campus mom.”

Dougherty got straight A’s last semester and is shadowing a pediatric oncologist at UVM this summer—her career ambition is in pediatrics or oncology research.

Vanessa Calagna ’99 met Patty her sophomore year at UVM after contracting mononucleosis and worrying that missing significant time in school would sidetrack her plans to graduate in four years.

She wasn’t inclined to take her mother’s advice to visit the Dean’s Office, thinking it was a place where students in low academic standing or in serious trouble ended up. A friend of a friend who worked in the CAS Dean’s Office told her that, no, she should “definitely come in and see Patty.”

“I really hadn’t expected anyone to be so warm and understanding,” Calagna remembers. “She asked such great questions, and I thought to myself ‘Man, who isthis woman? She really cares!’”

Corcoran arranged for Calagna to complete her assignments at home while she recuperated. After she returned to campus, Corcoran stayed in touch.

“I went through the next two years of college with this amazing new connection that just blew open my whole experience at UVM,” she said. “I was involved in a much deeper level, working closely with faculty members, giving talks in Ira Allen Chapel.”

Calagna went to work for Corcoran in the Dean’s Office and followed in her footsteps, earning a master’s degree in counseling and psychology at Lesley University in Cambridge. She lives in Newton, Mass. with her husband and two sons. She says she continues to use her “infinite Patty wisdom” in her work with young women ages 9-18.

Corcoran provided another sort of guidance for Ellie Miller, who was recruited from the University of Wisconsin-Milwaukee to serve as CAS dean in 2005.

“Patty knows everybody and people trust her–she’s a fixer. She really went to bat for me when I first arrived. She was an invaluable resource in helping me navigate a new campus culture.”

Besides “Patty’s bench,” presented to her on graduation day by her CAS colleagues, Corcoran received the President’s Our Common Ground Staff Award which recognizes staff who exemplify values of respect, integrity, innovation, openness, justice, and responsibility. In addition, the UVM Foundation recently established a permanent student scholarship, the Patty Corcoran Scholarship Fund.

“Patty was always the ‘go to’ person when you were up against problems that seemed unsolvable, “ says current College of Arts & Sciences Dean Bill Falls. “I think it’s a product of her deep institutional knowledge, her incredible interpersonal skills, her creativity, and her intelligence and persistence to get things done. We will miss her.”

Kevin Coburn
“I really hadn’t expected anyone to be so warm and understanding. She asked such great questions, and I thought to myself ‘Man, who is this woman? She really cares!’” -- Vanessa Calagna ’99