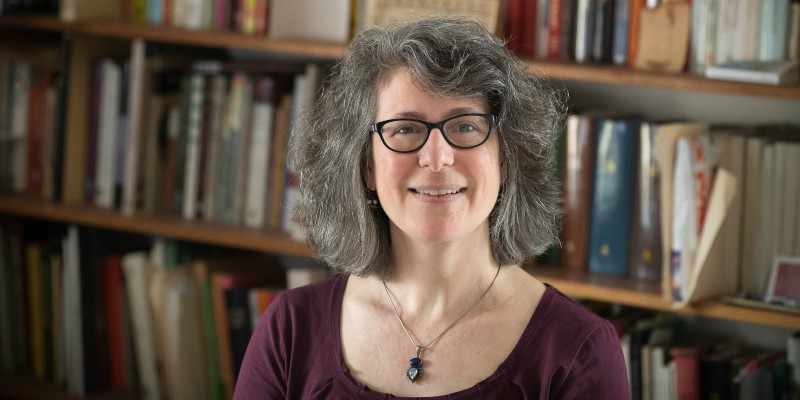 As newly appointed director of UVM’s Jewish Studies program, Erica Andrus sees her role as not only adding new dimensions to the program, but promoting the larger vision of improved religious literacy.

“For me, learning about Judaism is part of learning about different religious communities and how religions have an impact on all of our lives,” Andrus says. “Religion is central to our society, and having some background in religious studies is essential in learning how to understand and get along with other people.”

The program at UVM was established two years ago as a minor (students need to earn at least 18 credits in the discipline). It examines Judaism not only as a religion but as a civilization with deep roots, and as a culture encompassing a rich tradition in language, literature, philosophy and religion, art, music and film.

Andrus specializes in religion in America, with a particular interest in religion and popular culture. She majored in religion at Oberlin College where she finished her B.A. in 1992. She completed a master’s degree at Wilfrid Laurier University in Waterloo, Ontario, and received her PhD from the University of California, Santa Barbara in 2006.

She succeeds longtime professor Huck Gutman who retired this spring after a 46-year career at UVM, which was interrupted by a stint as chief of staff in Washington for Sen. Bernie Sanders (I-Vt.).

“Huck did a fantastic job of reaching out and bringing faculty across the college to offer courses in the minor,” said Andrus. “That was important because Jewish studies is very interdisciplinary in nature. We have many excellent faculty from different departments providing different perspectives to our students.”

“Next spring we’ll be offering a class called ‘Judaism in the United States.’ One class activity will be doing oral histories of Jews in Vermont.”

The program is modelled on a successful oral history project recently developed at the University of Kentucky. Andrus hopes to develop a symposium centered around student work that documents and preserves Jewish history in Vermont.

The course will also investigate the significant contributions of the Jewish community in American labor and civil rights movements (and the more recent withdrawal from these causes by Jewish conservatives); Jewish food in America; and how portrayals of Jews in mass media and pop culture shape perceptions about Jewish culture.

In addition to this course, the offerings for Fall and Spring come from a variety of disciplines, which may include the departments of English, German and Russian, history, and religion.

Andrus sees a variety of resources on campus that can add new depth and dimension to the minor—she’s interested in continuing to build strong partnerships with the Center for Holocaust Studies, the UVM Interfaith Center, the Humanities Center, and the international education office, as well as student groups and possibly learning communities. She is working on establishing a lecture or performance series showcasing a variety of approaches to the study of Judaism, allowing scholars on campus to share their work with the community, and bringing performers, scholars, and community members here as well.

Kevin Coburn
“For me, learning about Judaism is part of learning about different religious communities and how religions have an impact on all of our lives. Religion is central to our society, and having some background in religious studies is essential in learning how to understand and get along with other people.” -- Erica Andrus