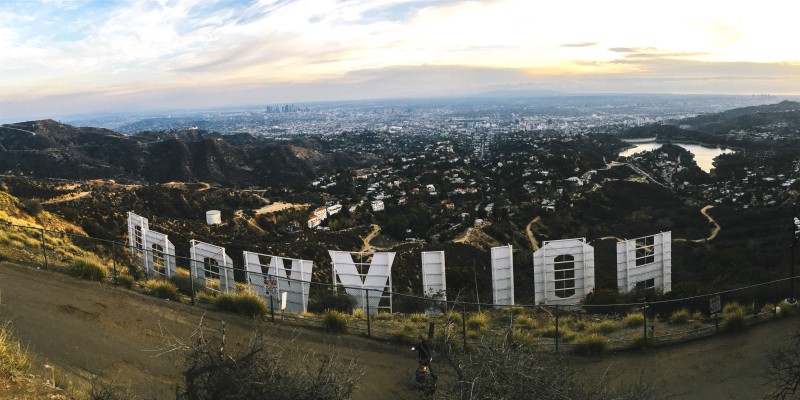 The group's first activity on the morning after arrival in LA was hiking up to the iconic Hollywood sign.

UVM Film and Television Studies Professor Sarah Nilsen took a dozen UVM students to Los Angeles for four jam-packed days over the winter break as a capstone experience for a course on the movie industry. Nilsen was the chief instructor, but she had at least a dozen unofficial “adjuncts” in LA, all UVM alumni who work in the film industry as actors, producers, directors and marketing executives.

The course examines the Hollywood studio system which has dominated the global film market since the 1920s, and the social and cultural impacts of film on American society.

“We study the history of the studios which includes the Hollywood style of filmmaking and the industry structure,” Nilsen explained. “Then we travel to LA and meet some of the people who make it all work. And there’s a tremendous amount of UVM talent there.”

For Chloe Chaobal ’20, the trip dispelled many preconceived notions about “La-La Land.”

“We all hear negative things about LA—the pollution, the smog. When I got there I was honestly surprised at how beautiful it was. Instead of being self-absorbed, the people we met were really open and generous.”

Chaobal is an anthropology major interested in writing and media studies—she produces podcasts for UVM’s student newspaper the Vermont Cynic and worked as an intern for author and UVM alumna Gail Sheehy last summer.

She was especially impressed by a meeting with Katie Elmore Mota ’04, founder and executive producer of Wise Entertainment.

“I loved how she was creating her own niche, doing work that’s really cutting-edge and socially relevant,” Chaobal said.

Mota and her husband Mauricio produced "East Los High," a drama series that debuted on Hulu in 2013. The series has earned five Emmy nominations for its portrayal of inner-city Latino high school students—it was the first English-language television show with all-Latino cast members, creators, and writers.

“Our goal is to create things that people love and that make them say, ‘I’m seeing myself for the first time on TV,’” Mota said recently in an interview with UVM’s Vermont Quarterly magazine.

Students also met with Mike Ridgewell, vice-president of creative media and digital marketing for Fandango, the online movie ticketing company. Ridgewell, a father of a current UVM student, arranged for a tour of Fandango offices and hosted a two-hour sit down that included several Fandango employees.

There’s a big career outreach component to the course, and Nilsen advised the students to thoroughly research the people they would be visiting and the companies they represented. She encouraged them to create a LinkedIn page if they hadn’t already done so, and connect with their hosts online.

“Mike came up to me right after the meeting and gave me a list of names of students who had done their homework and really impressed him with their questions,” Nilsen said. “It was great experience for students looking for opportunities in the industry. Having connections is vital to getting your foot in the door.”

Jay Roth ’68, who recently retired as national executive director of the Directors Guild of America, gave the class a tour of guild headquarters on Sunset Boulevard. After a career in labor law, Roth was hired for the top SGA job in 1995 and has led the guild’s collective bargaining agreements ever since—Daily Vanity called Roth the "showbiz point person on making a deal to ensure Hollywood's labor peace."

Students met several alumni on the creative end of the business, including actor Tim Griffin. He played Ronny O’Malley on Grey’s Anatomy and his lengthy list of film credits include roles in The Bourne Supremacy, Leatherheads, The Men Who Stare at Goats, A Better Life and American Sniper. Griffin’s friend and UVM alumnus Josh Stroberg, a director and writer (he directed the award-winning film Life Coach), dropped by for what turned into a two-and-a-half hour discussion and dinner.

Another highlight was meeting with Patrick Starr ‘98, senior vice president of creative advertising at Universal Pictures. Starr, who studied English at UVM, took time to meet with the students in his building’s jaw-dropping conference room, and included several of his Universal colleagues. One of them was Sean Zabik ‘16, now a creative coordinator for Universal who creates movie trailers, produces digital content, and develops TV spots and movie posters—"just about everything involved in promotion of big productions,” he said.

Zabik worked as a research assistant for Nilsen, and with the help of UVM faculty he landed summer internship at Sharp Entertainment in New York City. That led to a gig job shadowing for Starr, and Zabic was hired full-time at Universal in 2017.

“They were really generous with their advice—not just about how the business works but basic things like ‘how do you move to a new city? Where’s the best place to live? Do you need a car?’”

She believes the four-day experience not only oriented her to the city, but set expectation levels for being successful in the industry. Ridgewell told the group that skills and commitment are important, but that working respectfully and collaboratively are essential. When he interviews job applicants, he makes it a practice to check with the garage attendant and office receptionist about how they were treated by each candidate during the interview process.

Nilsen is gratified the students met many young UVM alumni like Zabik and Sadie Holliday ’14, who worked at UVM’s radio station WRUV as a student, and now works as manager of the Montreal-based band Homeshake.

“Our students can begin to imagine themselves in these positions, doing these jobs. And it also makes me proud to think our school here on the opposite coast has produced all these successful people in the industry.” 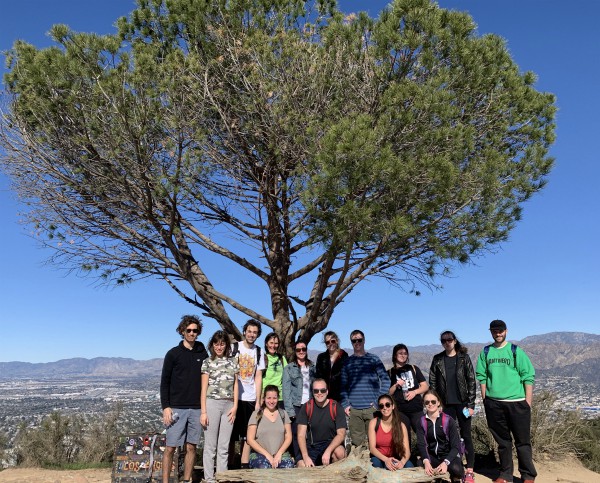