Working as part of a three-person creative advertising team for Universal Pictures, Sean Zabik ’16 has traded in his wool sweaters for lighter attire in sunny Los Angeles. A film maven since he was a kid growing up near Springfield, Mass., he’s right where he wants to be. “The long hours and fast pace can be brutal. But it’s terrifically rewarding to be involved in film and I’m really loving it.”

Zabik studied psychology and film and television studies at UVM, and he believes the combination of majors provided him with twin lenses that brought his world into focus. “The film major helped me value the importance of art as a medium, whereas psychology showed me the need of broadening a focus on mental health.” 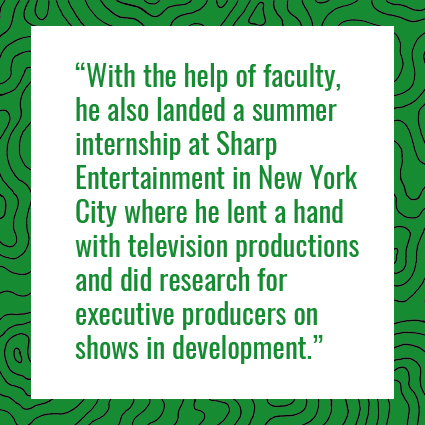 For a year at UVM he worked at Spectrum Youth Services in Burlington, supporting case managers who helped clients attain safe, affordable housing and provided youth counseling services. In the film and television studies department, he worked as a research assistant for Professor Sarah Nilsen, looking at racial stereotypes in film. With the help of faculty, he also landed summer internship at Sharp Entertainment in New York City where he lent a hand with television productions and did research for executive producers on shows in development.

After job shadowing UVM alum Patrick Starr, now a senior vice-president in advertising for Universal Pictures, he was hired full-time in 2017. His team handles promotions for major Universal releases and lately he’s been immersed in publicizing “Pacific Rim: Uprising” directed by Steven DeKnight.

His team also works with Blumhouse Productions, founded by academy-award winner Jason Blum, on films including “Get Out,” “Happy Death Day,” and “Paranormal Activity.”

Now approaching his first-year anniversary on the job, he hasn’t had time to look ahead to the next step.

“I could see myself staying here for a while, learning the ropes. I could eventually see getting more involved in the creative side with some of the vendors we work with. When you are open to opportunities and are in the right place at the right time, I think good things will happen.”