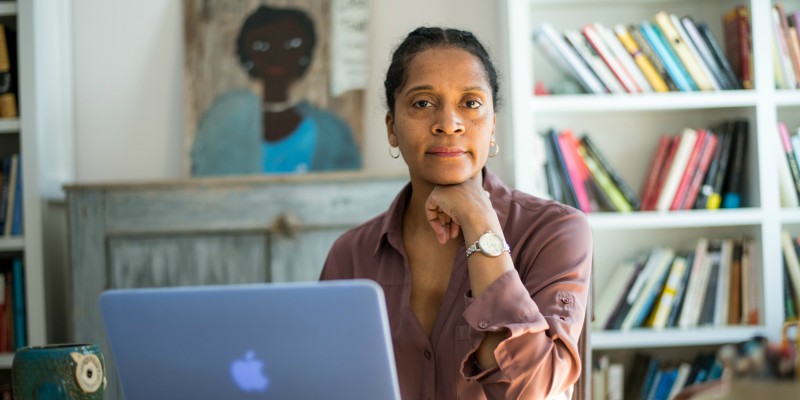 As critics weigh in on the best work of 2019, Emily Bernard, Julian Lindsay Green & Gold Professor in UVM’s Department of English, has not gone unrecognized. Her recent collection of essays Black is the Body: Stories from My Grandmother's Time, My Mother's Time, and Mine was named today by Kirkus as one of the “Best Books of 2019 to Fight Racism and Xenophobia.” The book also was named one of the top ten “unputdownable reads” of 2019 by noted author and critic Maureen Corrigan. Corrigan cited Bernard’s book on the December 3rd edition of Fresh Air, the daily WHYY program hosted by Terry Gross and heard in NPR stations across the country.

“Bernard writes with depth, poetic intensity and humor about growing up Black in the South and living and teaching in the snow globe of Vermont,” Corrigan notes. “Her personal essays on race never hew to the same or expected paths.”

Kirkus declares Black is the Body is “almost devoid of jargon. Instead, the writing is deeply felt, unflinchingly honest, and openly questioning.”

Bernard’s book unpacks her experience with race in America, having grown up Black in the south in Nashville and now raising two Black daughters in one of the whitest states in the United States.

In one essay, Bernard describes overhearing her twin daughters, who were five at the time, chat about a commercial on TV during Black History Month.

She remembers being impressed with their learning at the time, but also being struck by the fact that she had not yet taught them about race, and how different their lessons would be from hers growing up.

“I realized my introduction to the language of race was about trauma. It was racism. I learned that I was Black. I learned that I was always in danger. I learned that was I vulnerable,” she says. She likens her adolescent years and progressive Nashville community to “cogs on the great wheel of that whole machine. It was an important time, but it was also a scary time.”

Bernard holds a B.A. and Ph.D. in American Studies from Yale University. Her essays have been reprinted in Best American Essays, Best African American Essays, and Best of Creative Non-fiction. Her first book Remember Me to Harlem: The Letters of Langston Hughes and Carl Van Vechten, was a New York Times Notable Book of the Year.