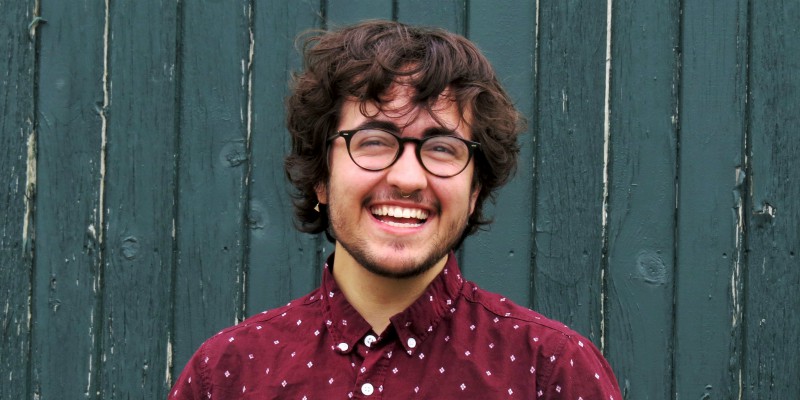 Alex Escaja-Heiss, a double major in film and television studies and gender, sexuality and women’s studies at UVM, was recognized this month by GLAAD as one of “20 Under 20: Young LGBTQ People Shaping The Future of Media and Activism” in Teen Vogue magazine.

Escaja-Heiss began to adopt filmmaking as a medium to interpret his own world view during his years as a student at South Burlington’s Frederick H. Tuttle Middle School, where he participated in a film and TV broadcasting club.

“I got hooked—film is a medium that’s so evocative, that can convey ideas so powerfully. I also watched a lot of movies around that time that really changed my ideas and perspectives. I wanted to create the same kind of challenging content.”

At the time, Escaja-Heiss was coming to terms with his own identity—he identifies as transgender—he discovered Outright Vermont, a Burlington-based non-profit dedicated to providing resources for LGBTQ youth. “I found a community there that was really empowering. I was involved with their programs and their summer camp”

Escaja-Heiss was determined to create safe spaces for peers experiencing the same identity struggles, and he founded the Gender and Sexuality Alliance Club at South Burlington High School. Since then he’s emerged as a confident leader in the LGBTQ community, working as an advocate, peer educator, and youth representative board member for Outright Vermont. He also served a stint as a student representative on the South Burlington School Board.

His success in film began in 2013 when he won a video contest hosted by NASA. Since then, he’s produced several award-winning films including Looking Back at Me, a documentary that tells the story of an 18-year-old musician from Vermont seeking to combat stigma and erasure of trans and non-binary people within their community.

The award received broad critical acclaim—it was named as an official selection for ten film festivals and many educational screenings around the country. It put Escaja-Heiss on the map as a young filmmaker to watch.

“Part of the reason the film works is that it’s clearly made by someone 17 years old, and by someone who is part of the trans community,” he said. “You can tell I was behind the camera.”

Escaja-Heiss is in good company on the Teen Vogue “20 Under 20” list. It includes Emma González, a survivor of the 2018 Marjory Stoneman-Douglas (MSD) High School shooting who became a leading gun control activist, and actress Josie Totah, who has starred in roles in NBC’s “Champions,” “Spider Man: Homecoming,” and Fox’s “Glee” and “New Girl.”

At UVM Escaja-Heiss is active in the UVM Film Club and serves as Activism Committee chair of the Queer Student Union. Last semester he participated in Arts in Action, a semester-long College of Arts & Sciences internship program in New York City for students interested in using the visual arts as a lens for exploring issues of inequality and social justice. He was working at the Museum of the Moving Image in Astoria when the coronavirus epidemic ended in-person activities.

Now home in Burlington, he’s looking forward to his return to UVM in the fall. His next big project is producing a film for his honors thesis with advisor Hillary Neroni that combines film theory with topics from his studies in sexuality and women’s studies.

“If you can’t recognize yourself in your surroundings, whether it be your friends, family or the TV screen, it can be difficult to recognize your own value in the world,” Escaja-Heiss tells Teen Vogue. “For this reason, it is has been vital for me to provide representation in communities that lack it.”

Learn more about Alex and his work as a filmmaker and advocate.

Kevin Coburn
“If you can’t recognize yourself in your surroundings, whether it be your friends, family or the TV screen, it can be difficult to recognize your own value in the world."--Alex Escaja-Heiss