What began as an interest in Black women in 19th century California developed into an interest in their lives in pre U.S. California when the state was a part of Mexican territory. I'm curious about what life was like for Black Women during the period of Spanish colonization. African and women of African Descent were in Mexico which was called New Spain by the 17th century. With women and children representing about a third of the slave trade into Mexico they were not invisible nor inconsequential in the evolving cultures.

The question(s) become even more important with the resurgence of an Afro Mexican culture in Mexico. And from the U.S. side of the border there has been a thin but constant thread of African American interest and involvement in Mexico. The interest follows run-away slaves and freed Blacks during the mid 19th century to artist/political activist in the 20th century. When Elizabeth Catlett became a citizen of Mexico in the 1960's it was in part a form of Black American protest. In some ways Mexico has long represented a sort of Black 'promise land.'

All of my work is rooted in and begins with a basic curiosity. How did/do Black females and their descendants survive and thrive while resisting restrictions based on race and gender? I'm particularly intrigued by the observations and reactions of free and freed Black women as they traveled about the world during the19th and 20th century. What is their assessment of the people and world around them? It is a perspective that has yet to be given serious consideration. 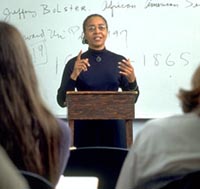