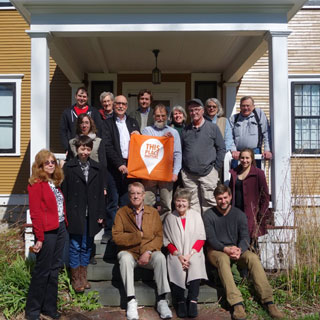 A major success story of the University of Vermont Historic Preservation Program was celebrated when students, faculty, and members of the larger Vermont preservation community gathered at Rokeby Museum in Ferrisburgh, Vt., on April 27, 2017. Home to the Robinson family from 1793 to 1961, the farm complex is a National Historic Landmark because of the family’s well-documented work for the Abolitionist movement before the Civil War.

Before touring the site, students and their professors Thomas Visser and Robert McCullough visited with Rokeby Museum staff, board of directors, and volunteers to recognize 30 years of partnership between the museum and the university. Jane Williamson, the museum’s director (a 1993 graduate of the UVM preservation program), discussed the process of gaining National Historic Landmark designation for the museum located in Ferrisburgh, Vt. Extensive archives make the Rokeby one of the country’s best-documented historic sites related to the Underground Railroad and the Abolitionist movement, and the farmhouse still contains the Robinson family’s possessions.

Members of Rokeby’s board of directors, employees, supporters, and volunteers later joined the UVM group for an event looking back at 30 years of partnership between the museum and the university. Professor Visser called the museum and the UVM program “partners in preservation.” He gave a visual presentation “in recognition of the Rokeby Museum’s outstanding accomplishments in historic preservation, conservation research, and heritage education.” Research and technical assistance projects by UVM faculty and students have contributed to the site’s preservation over the past three decades.

Board member Dean Leary, former director Karen Peterson, former Vermont State Historic Preservation Officer Eric Gilbertson, and others reflected on the museum’s preservation problems and achievements. Professor Visser thanked Harriet Patrick for her many years of dedicated support of historic preservation at Rokeby Museum, at the University of Vermont and elsewhere in Vermont.