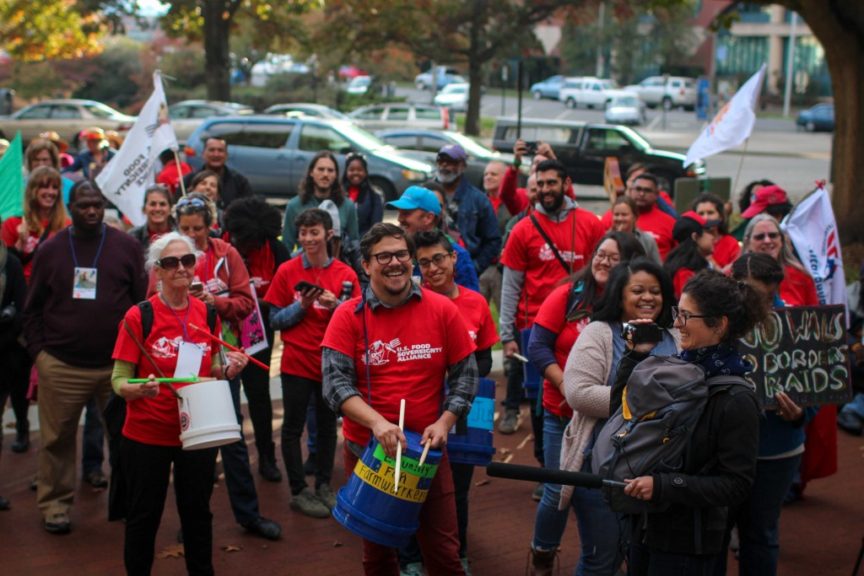 Re/New Alliances: Working towards farmer-scholar collaboration for food sovereignty in North America (this blog is a re-post taken, with permission, from the AgroecologyNow! website)

The Centre for Agroecology, Water and Resilience (CAWR) at Coventry University (UK) recently hosted a workshop to “collectively strengthen relationships, learning/analysis and collaboration for people who are involved in research and knowledge work that advances movements for agroecology and food sovereignty”. We are grateful to have participated, and for the deep and thoughtful organization and facilitation that allowed us to move this objective forward. As scholars and organizers seeking to strengthen agroecology and food sovereignty in the North American context, we used the workshop as an opportunity to discuss potential actions for the future. This blog sets out some of this thinking and highlights the need for renewing collaborations between academic researchers and grassroots movements groups, based on building trust and mutual understanding.

Read the first blog in this series on Indigenous Peoples by Carol Kalafatic here.

What is the relevance of agroeocology and food sovereignty in the North American context?

As a region, North America has always played a key role in the implementation of food and agriculture policies worldwide. The governments of Canada and the United States, for instance, have opposed language around food sovereignty and agroecology in international treaties and processes at the United Nations. Despite the views of supposedly “efficient” food and agriculture policies in North America, grounded on the trade agreements of NAFTA, the agricultural sector in the region has been dominated by large agribusinesses producing commodities, and not food. As a result of these policies, thousands of small-scale and indigenous farmers from Mexico have left their plots to work in the fields of the US and Canada in subpar living conditions, and many working under the stress of being undocumented.

Farmers and fisherfolk in the US are also living under constant threat of losing their land and boats to banks and other creditors. Instead of providing a fair share to food producers, the current policies only benefit banks, and international agribusinesses. Because of these conditions, every year — since the 1970’s — fewer are able to stay on the land, with farmers representing less than 2% of the US population today.

The alternative political, ecological, and even epistemological worldviews offered by agroecology and food sovereignty present key tools for organizing and analyzing more equitable and just alternatives in North America. In particular they provide effective ways to challenge both the internal and external colonizing legacies of North America.

How have these movement(s) in North America advanced so far?

The real solutions to the growing food insecurity in North America can be found, on the ground, across the region. However, these initiatives receive little attention from policy makers and scholars. Yet agroecological practices developed by small-scale farmers and fisherfolk represent hope – a way to simultaneously end hunger and to “cool the planet”.

From this perspective, alliances between grassroots groups, supporting non-profits and scholars play an essential role to ‘scale out’ — by supporting the leadership of food producers – and ‘scale up’ — by building enough power to press for better policies. It is in those spaces that rural and urban communities are working to build a path to scale out agroecology towards food sovereignty in North America, learning from the on-going work of following the same steps as others, such as those aligned with La Via Campesina International and other global social movements. These coordinated global efforts are at the front and center of the struggle of millions of families worldwide, for material gains (access to land and resources, healthy foods, and stewardship of land, water and biodiversity) and immaterial necessities (defending farming and fishing as a way of life).

Some of the initiatives that have been taking root in North America include the People’s Agroecology Process, a grassroots-led space which is currently formed by African American and Native American groups and farmer and farmworker organizations from the US, Puerto Rico and Canada. For the past ten years, the US Food Sovereignty Alliance (USFSA) has brought together rural and urban organizations for the advocacy of food sovereignty and agroecology. And the Agroecology Research and Action Collective, a broadly defined scholars’ group, is dedicated to coordinating respectful and effective efforts between researchers and grassroots organizations.

How are scholars contributing to advancing agroecology and food sovereignty in North America?

In the U.S., agroecology has a long history within academic institutions. Steve Gliessman, Miguel Altieri, Sunny Power, Deborah Letourneau, Dick Levins, Ivette Perfecto and John Vandermeer (among others), have represented pioneering agroecological thinking, based within U.S. universities, since the 1970s. (And other U.S. pioneers who may not have called themselves “agroecologists” are increasingly recognized, from George Washington Carver to Booker T. Whatley and Owusu Bandele.) However, the linkage between these scholarly efforts was not historically linked to social movements in the U.S. More recently, a new wave of agroecology scholars has sought to more intentionally make this connection; an effort that resulted in the creation of the Agroecology Action Research Collective (ARC).

The creation of ARC was spurred by conversations about an “Agroecology Forum” in North America, and strong encouragement from grassroots allies to “get our house in order” so that supportive scholars can act collectively, and more effectively, in solidarity for change. What are we willing to commit? What are our political commitments? And how do we make sure we can be relied upon to show up, and be collectively responsible, to frontline allies? These are several of the questions ARC was formed to answer.

Since its creation several years ago, ARC has engaged in the following activities: 1) convening sessions in academic forums for dialogue between grassroots actors and scholars; 2)  Attendance at coalition spaces such as the USFSA Meeting; 3) Creation of a document of principles and protocols for engaged scholarship in agroecology; and 4) the composition of an Open Letter on how a Green New Deal can incorporate agroecology. Several groups have already reported making use of ARC’s principles and protocols, with some seeking to adopt them for their own work. In monthly calls and several working groups, ARC continues to lay the foundations for ethical and effective solidarity and action for agroecology and food sovereignty in the U.S.

What is the importance of scholar-grassroots organization collaborations?

For too long, institutions in academia followed a path defined to protect the interests of few. Universities were built on ancestral lands of indigenous people whose chances to enjoy the fruits of study and reflection with others under the imposed systems were almost null. Further, farmers, fisherfolk, indigenous people and pastoralists, whose labor and knowledge is the basis of all sciences, have often had this knowledge and labor captured, unrecognized and uncompensated, through academic extractivism. It is unjust and intellectually inconsistent with science’s supposed principles to take advantage of such knowledge and labor. In other words, it is past time to advance free, prior, and informed consent for the nonmaterial world.[1]

The most important academic institutions are public and/or heavily funded by taxes. Hence, the creation of all knowledges should be the path to the benefit of all. It is the duty of all to redirect the path of academia towards the building of a dignified life, grassroots democracy and the Rights of Mother Earth.

What is the way forward?

There is urgency for the emergence of a broader coalition of allies to advance food sovereignty globally. Farmworkers, farmers, fisherfolk, indigenous people, scholars and consumers are building alliances towards that goal. Their organizing efforts such as ARC, USFSA, Climate Justice Alliance, HEAL Alliance, La Via Campesina and many others are important political actors as well as building blocks of a path to reclaim land, food, rights and knowledge from neoliberal policies and institutions.

A broader alliance between rural and urban people is also urgent and necessary. The challenges imposed on us by the current ecological, economic and political crises are destroying ecosystems, entire nations and life on Earth. There is no other option left besides a stronger commitment to build power from the bottom up and across nations. Steadily, communities are finding that our differences are also our strengths, and the urgency to defend our collective future outgrows our challenges to build unity.

Such unity has never been more urgent, as we face continued climate change and destabilization, and the global rise of authoritarian populism. Organized proponents of agroecology and food sovereignty have already made common cause with other social movements, such as the World March for Women and the World Forum of Fisher Peoples, and some voices from labor and anti-hunger groups; but much work remains to be done to bridge the divides among the oft-disunited groups offering complementary alternative visions to the domination of global capital. While there have been opportunities for collective reflection and strategizing, a whole new level of involvement is called for. Some of the actions available to take in the United States include scholars, such as those in ARC, “showing up” (when invited) to already-existing spaces, such as convenings of the US Food Sovereignty Alliance; Farm Aid; MOSES (the Midwest Organic & Sustainable Education Service); and continuing to seek creative ways for empowered grassroots voices to not just speak, but be listened to, in academic-convened spaces.

The CAWR meeting brought together scholars and grassroots actors to plan concrete action and collaboration, supporting “dialogues of knowledges”, mutual respect and accountability, and building power together to take on the challenges before us. One participant commented that it was way past time for scholars to stop using the phrase “giving voice to the voiceless,” because the voices of so many grassroots actors have been present and struggling for food sovereignty and agroecology for a long time. Rather, the problem has been that these voices have not been listened to, and in many cases, have been violently opposed. The workshop helped to reaffirm the challenges and joys of working across differences, undermining “privilege”, and the need for building power together towards an agroecological future for all.

[1] Free, prior, and informed consent (FPIC) has been an important element of struggles for indigenous rights, as well as debates and resistance around “land grabs”.