Writing the Sisyphus Within 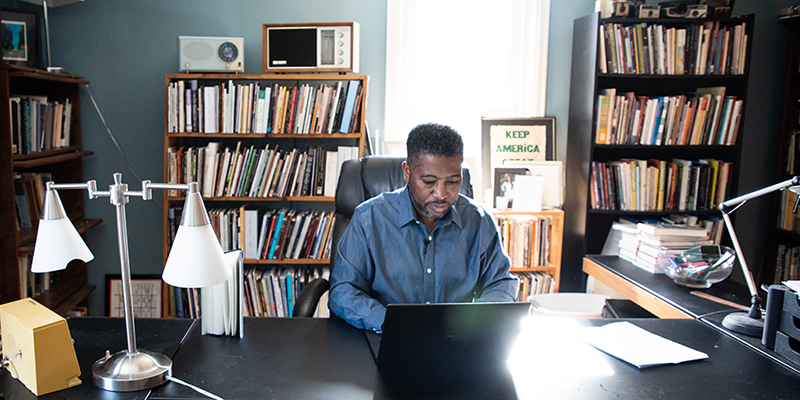 Major Jackson, Richard A. Dennis Professor of English, at home. His latest collection of poetry, “The Absurd Man,” explores humanity’s greatest question: What is the meaning of life? (Photo and video: Ian Thomas Jansen-Lonnquist)

Sisyphus is perhaps best known in Greek mythology for being condemned to an eternity spent rolling a boulder uphill, just to watch it roll back down and repeat the process. His punishment has inspired work from painters, artists and writers through centuries depicting the strength it takes Sisyphus to, quite literally, carry on with the task. But among philosophers, Sisyphus is perhaps best recognized as a symbol of the absurd condition, hinged on humanity’s greatest question: What is the meaning of life?

It’s this question that acclaimed poet and Distinguished Professor of English at the University of Vermont Major Jackson contends with in his latest collection of poetry, “The Absurd Man,” published by W.W. Norton. Invoking Sisyphus’s struggle for happiness and even contentment, Jackson’s lyrical collection follows a speaker through poems and moments fraught with instability and whimsy, relationships stumbling on shaky ground and periods of life at its highest and lowest. Shifting between several personas, the speaker heroically contemplates love and loss, navigates a changing world and family dynamics, and reflects on past mistakes and redemption.

In a nod to French philosopher Albert Camus, who famously penned the absurdist essay “The Myth of Sisyphus,” Jackson’s new title implicates the speaker in his poems as “the absurd man,” who bravely grapples with his own Sisyphean task to understand his journey on earth, his condition of unknowability. “Where Camus lands is that, despite the absurdity of existence — despite Sisyphus pushing the boulder only for it to fall back down the hill and having to push it again — Camus writes we have to imagine that Sisyphus is happy and accepting of the irrational continuity of hardship and struggle. And, in fact, it is that very predicament that bonds us as human beings,” Jackson explains.

Like Camus, Jackson offers a glimmer of hope in “The Absurd Man” as poems reveal the speaker is anchored to his world through his capacity as a son, father, husband, friend and colleague. “I'm trying to assert that all life possesses worth, and its significance is most evident when we consider our relationships with other human beings — family, friends, co-workers, strangers —how we tend to each other, how we carry each other's memories, how we bring solace to one another, how we laugh together through tears,” he says.

And in the fractured world in which we live today, Jackson argues that caring for others is becoming increasingly important — and so is the need for poetry. Comparing Sisyphus’s boulder to today’s prescribed sequence of daily routines and various forms of escape: “That particular cycle, as Camus says, is the very kind of life that does not necessarily invite reflection and authenticity.”

But just as the speaker in “The Absurd Man” is able to slip from the condition of unknowability by finding meaning in life’s relationships, the writer behind the poems — Major Jackson — slips from the absurd condition of life by connecting with others and the world through language.

“For me, writing poems is my way of leading an authentic life, a means to penetrate the void. So much of life feels tragically scripted, and making art is a way of disrupting the mundane and habituated cycles in life,” he says.

For instance, unexpected inspiration for poems in “The Absurd Man” struck Jackson in nature, surrounded by forests and trees; in his imagination, creatively building alternative worlds; and even in the simple way two sounds or words had come together. But don’t be fooled; depending on the day, writing poetry can be as challenging for Jackson as pushing the boulder was for Sisyphus—even after five books and a lifetime as a poet.