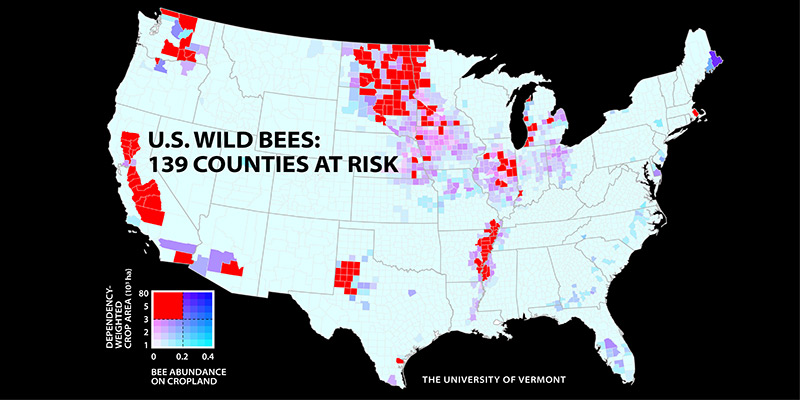 The first national study to map U.S. wild bees suggests they’re disappearing in many of the country’s most important farmlands — including California’s Central Valley, the Midwest’s corn belt and the Mississippi River valley.

If losses of these crucial pollinators continue, the new nationwide assessment indicates that farmers will face increasing costs — and that the problem may even destabilize the nation’s crop production.

The findings were published Dec. 21 in the Proceedings of the National Academy of Sciences.

The research team, led by Insu Koh at the University of Vermont, estimates that wild bee abundance between 2008 and 2013 declined in 23 percent of the contiguous U.S. The study also shows that 39 percent of U.S. croplands that depend on pollinators — from apple orchards to pumpkin patches — face a threatening mismatch between rising demand for pollination and a falling supply of wild bees.

In June of 2014, the White House issued a presidential memorandum warning that “over the past few decades, there has been a significant loss of pollinators, including honey bees, native bees, birds, bats, and butterflies.” The memo noted the multi-billion dollar contribution of pollinators to the U.S. economy — and called for a national assessment of wild pollinators and their habitats.

“Until this study, we didn’t have a national mapped picture about the status of wild bees and their impacts on pollination,” says Koh, a researcher at UVM’s Gund Institute for Ecological Economics — even though each year more than $3 billion of the U.S. agricultural economy depends on the pollination services of native pollinators like wild bees.

The report that followed the White House memo called for seven million acres of land to be protected as pollinator habitat over the next five years. “It’s clear that pollinators are in trouble,” says Taylor Ricketts, the senior author on the new study and director of UVM’s Gund Institute. “But what’s been less clear is where they are in the most trouble — and where their decline will have the most consequence for farms and food.”

“Now we have a map of the hotspots,” adds Koh. “It’s the first spatial portrait of pollinator status and impacts in the U.S.,” — and a tool that the researchers hope will help protect wild bees and pinpoint habitat restoration efforts.

The new study identifies 139 counties in key agricultural regions of California, the Pacific Northwest, the upper Midwest and Great Plains, west Texas, and the southern Mississippi River valley that have the most worrisome mismatch between falling wild bee supply and rising crop pollination demand. These counties tend to be places that grow specialty crops — like almonds, blueberries and apples — that are highly dependent on pollinators. Or they are counties that grow less dependent crops — like soybeans, canola and cotton — in very large quantities.

Of particular concern, the study shows that some of the crops most dependent on pollinators — including pumpkins, watermelons, pears, peaches, plums, apples and blueberries — have the strongest pollination mismatch, with a simultaneous drop in wild bee supply and increase in pollination demand. “These are the crops most likely to run into pollination trouble,” says Taylor Ricketts, “whether that’s increased costs for managed pollinators, or even destabilized yields.”

Pesticides, climate change, and diseases threaten wild bees — but the new study also shows that their decline may be caused by the conversion of bee habitat into cropland. In 11 key states, in those parts of the state where the new study shows bees in decline, the amount of land tilled to grow corn spiked by 200 percent in five years — replacing grasslands and pastures that once supported bee populations. “These results reinforce recent evidence that increased demand for corn in biofuel production has intensified threats to natural habitats in corn-growing regions,” the new study notes.

“By highlighting regions with loss of habitat for wild bees, government agencies and private organizations can focus their efforts at the national, regional, and state scales to support these important pollinators for more sustainable agricultural and natural landscapes,” says Michigan State University’s Rufus Isaacs, one of the co-authors on the study and leader of the Integrated Crop Pollination Project, a USDA-funded effort that supported the new research.

Over the last decade, honeybee keepers have lost many colonies and have struggled to keep up with rising demand for commercial pollination services, pushing up costs for farmers. “When sufficient habitat exists, wild bees are already contributing the majority of pollination for some crops. Even around managed pollinators, wild bees complement pollination in ways that can increase crop yields,” says Neal Williams, a co-author on the study from the University of California, Davis.

“Most people can think of one or two types of bee, but there are 4,000 species in the U.S. alone,” says Taylor Ricketts, Gund Professor in UVM’s Rubenstein School of Environment and Natural Resources. “Wild bees are a precious natural resource we should celebrate and protect. If managed with care, they can help us continue to produce billions of dollars in agricultural income and a wonderful diversity of nutritious food.”

The team of seven researchers — from UVM, Franklin and Marshall College, University of California at Davis, and Michigan State University — created the new maps by first identifying 45 land-use types from two federal land databases, including both croplands and natural habitats. Then they gathered detailed input from 14 experts on bee ecology about each type of land — and how suitable it was for providing wild bees with nesting and food resources.

Averaging the experts’ input and levels of certainty, the scientists built a bee habitat model that predicts the relative abundance of wild bees for every area of the contiguous United States, based on their quality for nesting and feeding from flowers. Finally, the team checked and validated their model against bee collections and field observations in many actual landscapes.

The model’s confidence is greatest in agricultural areas with declining bees, matching both the consensus of the experts’ opinion and available field data. However, the study also outlines several regions with greater uncertainty about bee populations. This knowledge can direct future research, especially in farming areas where need for pollination is high.

“We can now predict which areas are suffering the biggest declines of wild bee abundance,” Insu Koh says, “and identify those areas, with low bee supply and high bee demand, that are the top priority for conservation.” 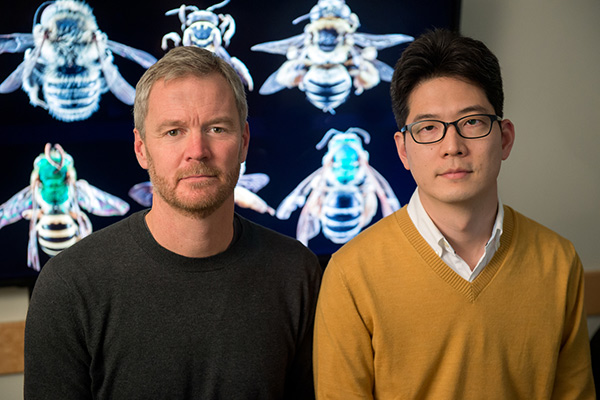 A research team led by Insu Koh (right) and Taylor Ricketts, bee experts at the University of Vermont's Gund Institute for Ecological Economics, estimates that wild bee abundance between 2008 and 2013 declined in 23 percent of the contiguous U.S., potenti 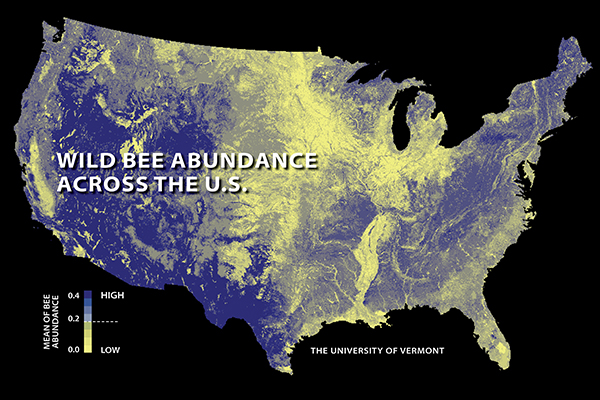 The first national study to map U.S. wild bees suggests they're disappearing in many of the country's most important farmlands. Relatively low abundances are shown here in yellow; higher abundances in blue. (PNAS doi:10.1073.pnas.1517685113)