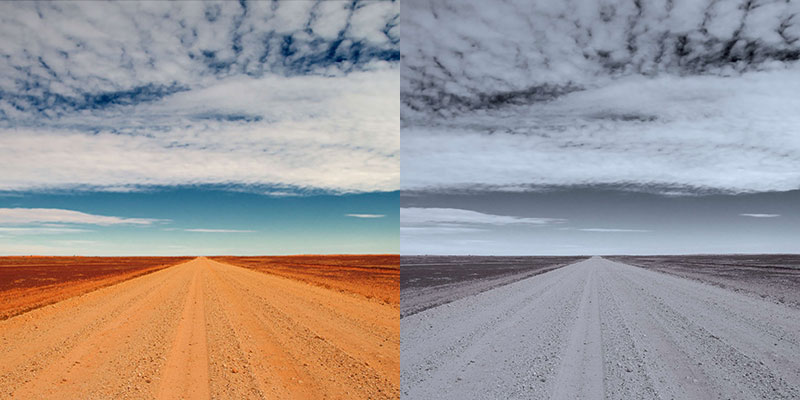 What filter do you choose? New research shows that Instagram photos posted by depressed individuals had values shifted towards those in the right photograph—darker, grayer and bluer—compared with brighter photos posted by healthy individuals. (Photo: EPJ Data Science)

When you're feeling blue, your photos turn bluer, too. And more gray and dark as well, with fewer faces shown. In other words, just like people can signal their sadness by body language and behavior—think deep sighs and slumped shoulders—depression reveals itself in social media images.

That's the conclusion of new research showing that computers, applying machine learning, can successfully detect depressed people from clues in their Instagram photos. The computer's detection rate of 70 percent is more reliable than the 42 percent success rate of general-practice doctors diagnosing depression in-person.

"This points toward a new method for early screening of depression and other emerging mental illnesses," says Chris Danforth, a professor at the University of Vermont who co-led the new study with Andrew Reece of Harvard University. "This algorithm can sometimes detect depression before a clinical diagnosis is made."

The team's results were published Aug. 8 in a leading data-science journal EPJ Data Science—and have been followed by media stories in outlets around the world including The New York Times, USA Today, Quartz, and hundreds of others.

The scientists asked volunteers, recruited from Amazon's Mechanical Turk, to share their Instagram feed as well as their mental health history. From 166 people, they collected 43,950 photos. The study was designed so that about half of the participants reported having been clinically depressed in the last three years.

Then they analyzed these photos, using insights from well-established psychology research, about people's preferences for brightness, color, and shading. "Pixel analysis of the photos in our dataset revealed that depressed individuals in our sample tended to post photos that were, on average, bluer, darker, and grayer than those posted by healthy individuals," Danforth and Reece write in a blog post to accompany their new study. They also found that healthy individuals chose Instagram filters, like Valencia, that gave their photos a warmer brighter tone. Among depressed people the most popular filter was Inkwell, making the photo black-and-white.

"In other words, people suffering from depression were more likely to favor a filter that literally drained all the color out the images they wanted to share," the scientists write.

Faces in photos also turned out to provide signals about depression. The researchers found that depressed people were more likely than healthy people to post a photo with people's faces—but these photos had fewer faces on average than the healthy people's Instagram feeds. "Fewer faces may be an oblique indicator that depressed users interact in smaller settings," Danforth and Reece note, which corresponds to other research linking depression to reduced social interaction—or it could be that depressed people take many self-portraits.

As part of the new study, Danforth and Reece had volunteers attempt to distinguish between Instagram posts made by depressed people versus healthy. They could, but not as effectively as the statistical computer model—and the human ratings had little or no correlation with the features of the photos detected by the computer. "Obviously you know your friends better than a computer," says Chris Danforth, a professor in UVM's Department of Mathematics & Statistics and co-director of the university's Computational Story Lab, "but you might not, as a person casually flipping through Instagram, be as good at detecting depression as you think."

Consider that more than half of a general practitioners' depression diagnoses are false—a very expensive health care problem—while the computational algorithm did far better. The new study also shows that the computer model was able to detect signs of depression before a person's date of diagnosis. "This could help you get to a doctor sooner," Danforth says. "Or, imagine that you can go to doctor and push a button to let an algorithm read your social media history as part of the exam."

As the world of machine learning and artificial intelligence expands into many areas of life, there are deep ethical questions and privacy concerns. "We have a lot of thinking to do about the morality of machines," Danforth says. "So much is encoded in our digital footprint. Clever artificial intelligence will be able to find signals, especially for something like mental illness." He thinks that this type of application may hold great promise for helping people early in the onset of mental illness, avoid false diagnoses, and offer a new lower-cost screening for mental health services, especially for those who might not otherwise have access to a trained expert, like a psychiatrist.

"This study is not yet a diagnostic test, not by a long shot," says Danforth, "but it is a proof of concept of a new way to help people."

Joshua E. Brown
Imagine that you can go to doctor and push a button to let an algorithm read your social media history as part of the exam. —Chris Danforth 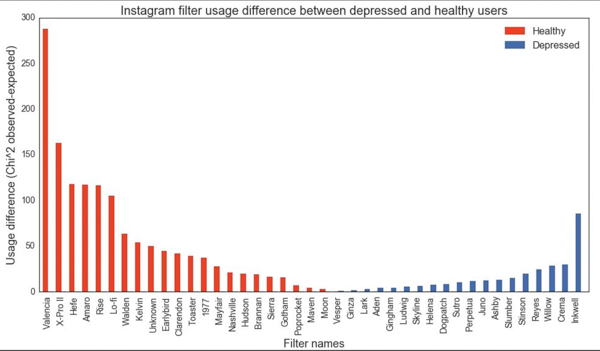