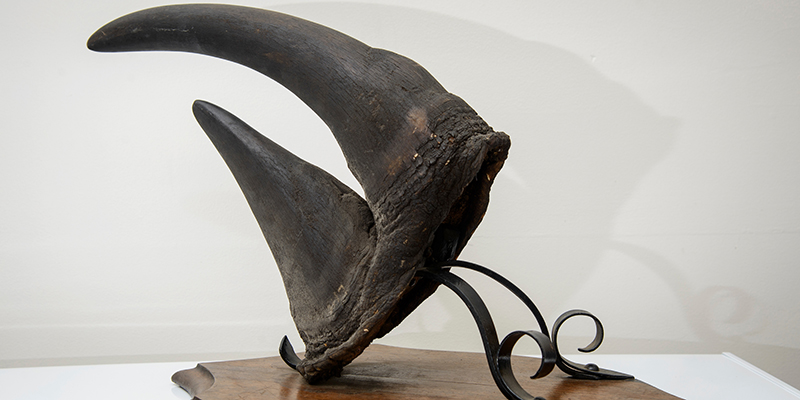 A black rhino horn valued at $200,000 that was stolen from UVM's Zadock Thompson Zoological Collections 11 months ago was recovered in Ridgefield, Conn. on March 6 and returned to the university. (Photo: Brian Jenkins)

A prized black rhinocerous horn that was stolen in April 2017 from the University of Vermont’s Zadock Thompson Zoological Collections in Torrey Hall has been recovered and returned to the university.

“I never thought we'd see it again,” said Bill Kilpatrick, curator of vertebrate section of the collection and a professor emeritus of biology at the university. “Needless to say, we couldn’t be happier.”

The horn, valued at $200,000 and dating from the early 1900s, is significant from a scientific standpoint because it contains genetic material that would provide insight into black rhinoceri about 100 years ago, when the genetic diversity of the species was much more robust than it is today.

There are only about 5,000 black rhinoceri in existence.

UVM Police began investigating the crime immediately after the horn was stolen, issuing a press release and a reward offered jointly by UVM and the U.S. Fish and Wildlife Service.

The press release resulted in a tip to UVM Police that the horn was in Ridgefield, Conn.

But the tip and investigation didn’t reveal enough information for police to secure a warrant to search the property of the suspect and bring criminal charges if the horn was found, so investigators and prosecutors in Connecticut and Vermont determined that the best strategy was to offer the suspect immunity if the horn was returned.

“Without such an offer, the return of the property would have been unlikely,” said Tim Bilodeau, UVM's deputy police chief.

On March 6, the Ridgefield Police Department, working from information given to them by UVM Police, was able to successfully recover the rhinoceros horn.

This case remains open pending further information, so no information about the suspect is being released. The possibility remains that the case could result in criminal charges against individuals other than the suspect who was granted immunity.

When it was acquired at the beginning of the last century, the rhino horn was mostly likely housed in Williams Hall, where the museum’s natural history collection the university’s Zoology Department were located.

In about 1950, the Fleming transferred ownership of the rhino horn, and the rest of its natural history collection, to the Zoology Department. But the paperwork didn’t move with the rhino horn – so the details of the horn’s provenance are vague.

In the mid-1980s the collection and the rhino horn moved to Torrey Hall as part of the Zadock Thompson Natural History Collections.

The collections are the official research zoological collection of the State of Vermont. While the collection includes birds, amphibians, lizards, snakes, fish, mollusks, and other taxonomic groups, the historical focus has been on mammals and arthropods. The mammalian collection is strong with over 10,000 mostly local mammals, while the insect collection comprises the vast number of specimens, with over 250,000 samples. The collection is used for teaching and scholarship and is not open to the public. 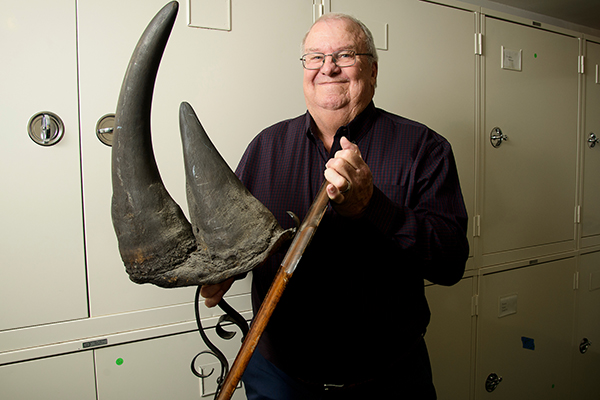