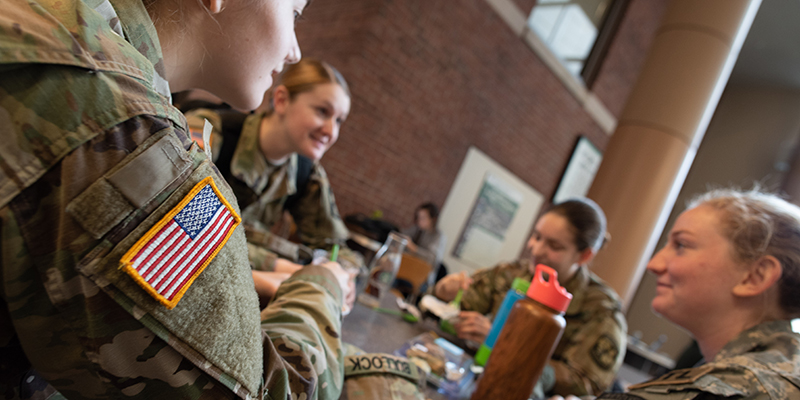 UVM’s ROTC program has been named among the country’s best. Here, sophomores Chloe Bullock, Abbey Lussier, Haley Kieny, and Julia Weiss, who are all training to be Army officers, grab a snack in the Davis Center before a class on military science. “We’re building character to be leaders, to be worthy of being followed,” says Lussier. “Once we’re commissioned as officers, that’s our job 24/7.” (Photo: Josh Brown)

The U.S. Army Cadet Command announced this week that the University of Vermont is one of eight winners of the MacArthur Awards for the school year 2017-2018. The award recognizes the eight schools, selected from among the 275 senior Army Reserve Officers' Training Corps (ROTC) units nationwide, as the top programs in the country.

The awards, presented by Cadet Command and the Gen. Douglas MacArthur Foundation, recognize the ideals of "duty, honor and country" as advocated by MacArthur.

The award is based on a combination of the achievement of the school's commissioning mission, its cadets' performance and standing on the command's National Order of Merit List and its cadet retention rate.

Cadet Command and the MacArthur Foundation have given the awards each year since 1989.

The 2017-2018 awardees of the General Douglas MacArthur Award, selected by their brigade commanders as the top performing program, are: