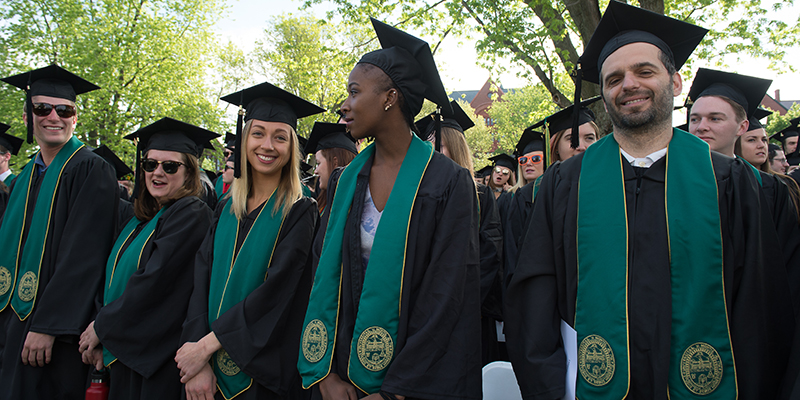 On average only three in 10 students attending public colleges graduate in four years, with each additional year of college representing both an extra expense and a delay in the earning power a college degree confers.

The University of Vermont is near the top of a new list of public universities that do the best job of helping students avoid these pitfalls and graduate on time.

According to a ranking published in the Chronicle of Higher Education, the University of Vermont’s four-year graduation rate  placed it in the top 5.7 percent among public universities. For public universities that are primarily residential, UVM ranked 17th.  Data for the rankings is drawn from the U.S. Department of Education.

The Chronicle of Higher Education ranking was based on the class of 2015, the last year for which the Department of Education has data. Since then, UVM’s four-year graduation rate has risen even higher, from 62.4 percent to 66.7 percent for the class that graduated in 2019.

“Helping students graduate on time is one of our most important responsibilities at UVM and is very much a part of our focus on student success,” said Suresh Garimella, president of the University of Vermont. “Being ranked among the top 6 percent of public universities nationally is strong affirmation that the UVM academic experience and support system for students is helping them stay on track.”

Stacey Kostell, UVM’s vice president for enrollment management, cited a number of factors that are helping keep students on schedule, including a new degree audit program that lets them quickly see what courses they need to take to graduate, and an expanded student advising program.

Ninety-two percent of UVM students have engaged in one of these practices before they graduate.

“UVM is a very good choice for students looking for an environment that has been carefully designed to help them succeed,” Kostell said.