Green Between Library, Davis Center to Be Special Place for Reflection 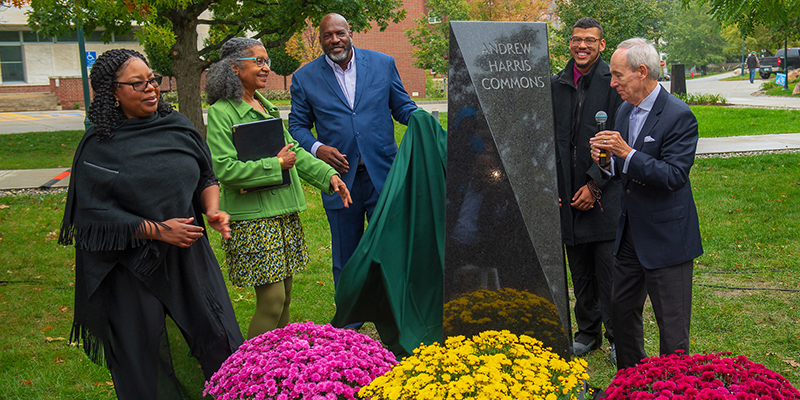 Sharing a moment of celebration after one of five Andrew Harris monuments was unveiled are (left to right) Wanda Heading-Grant, UVM’s vice president for human resources, diversity and multicultural affairs; Beverly Colston, director of the Mosaic Center for Students of Color; Khalil Munir (’74), a member of the board of directors of the UVM Alumni Association; UVM junior Mansa Campaz, president of UVM’s Black Student Union; and UVM president Tom Sullivan. (Photo: Sally McCay)

Cloudy skies and periodic drizzle couldn’t dampen the enthusiasm of four speakers and a large group of well-wishers who gathered on Sunday morning to dedicate the Andrew Harris Commons on the University of Vermont campus commemorating UVM’s first African-American graduate.

Marked by a large plaque and five black marble monuments, the Commons, where the ceremony took place, is located on the green surrounded by the Davis Center, the Terrill Building, Marsh Life Sciences and the Bailey-Howe Library.

Harris, one of the first African-Americans to attend college in the United States, graduated from UVM in 1838.

“Today we are here to recognize and honor the legacy of Andrew Harris by dedicating this new, special space, this Commons, at the heart and center of our campus,” UVM president Tom Sullivan told the group, made up of UVM alumni, students, faculty, staff and Burlington community members.

“The Andrew Harris Commons will be a welcoming space for all in our community and for guests to the University, in memory of a very courageous, determined and persuasive leader who started here at the University of Vermont,” he said.

After graduating from UVM, Harris was ordained as a Presbyterian minister and became a powerful voice of the abolitionist movement, Sullivan said. In May of 1839 he delivered a provocative speech to a crowd 5,000 at the annual meeting of the American Anti-Slavery Society at the Broadway Tabernacle in New York City calling for an end to slavery. His influence continued to grow after he joined the ministry. He served as a pastor at the largest free African-American community in upstate New York and later at the black Presbyterian church on St. Mary Street in Philadelphia.

Harris died young at age 27, as his influence and fame were on the rise.

Wanda Heading-Grant, UVM’s vice president for human resources, diversity and multicultural affairs, presided over the ceremony. In her remarks, she spoke to a two-year discussion and commitment that went into creating the Commons and to its unifying potential.

“This is been a long journey and, behind the scenes, people have worked very hard and thought very hard about what the Commons would be,” she said. It is “a canvas, one that will grow in what you see and in what blossoms, one that will speak to diversity, equity, inclusion, reconciliation, to coming together and unity,” she said.

Beverly Colston, director of UVM’s Mosaic Center for Students of Color, spoke of the challenges Harris experienced at UVM in the mid-1830s and of his inspiring success in persevering and graduating.

“For Andrew, matriculating at UVM was no easy feat,” she said. “What must it have been like for a young African-American man to attend this institution in the mid-1830s? Can you imagine Burlington, Vermont at that time? A small bustling waterfront town surrounded by farms, deep woods, mill towns and a population that did not include many who looked like him. In the South, slavery held its savage sway, and men like Harris were killed for learning to read. Against this alienating and horrifying backdrop, bravery, desire and determination drove one visionary young free black man to take hold of what must have been a miraculous opportunity, the chance to have a college education here at the University of Vermont.

“His decision to be present and develop himself at this institution charted a path to accessibility and rendered our public university a benefit to a more whole community, a broader community than was previously imagined,” she said.

Khalil Munir (’74), a member of the board of directors of the UVM Alumni Association, spoke of the Commons as part of a tradition of expanding social justice and of the inspiring role it can play moving forward.

“I want to acknowledge our ancestors, mine and yours, who were freedom fighters for social justice and goodwill for all of humanity,” he said.

“It is also appropriate and essential to appreciate that our first African-American alumnus, Mr. Andrew Harris, was guided by faith, perseverance and resolve and established a legacy of inspiration for all future demographics across this campus to emulate," he said. "To the students here today – especially to you – it is important to appreciate that your efforts can make a difference. It is also vital to appreciate that this Commons represents an opportunity, a mechanism to pursue consensus building, reconciliation and collaboration. It is also a place where you scholars, you future professionals, will make this a better world.”

any thing can be made, any sentence begun.

On the brink, on the brim, on the cusp,

praise song for walking forward in that light.

The Andrew Harris Commons is one of several ways in which UVM has honored its first African-American graduate. A plaque dedicated to Harris is mounted on the wall in the hallway outside the president's office in the Waterman Building. An academic chair in Memorial Lounge has been dedicated to him. The University has also established the Andrew Harris Scholarship to recruit talented students and the Andrew Harris Fellowship to help recruit faculty of color to UVM.

To close the ceremony, Heading-Grant thanked historian Kevin Thornton, a former lecturer in the Department of History, for his research that brought to light many details of Harris’s life, both when he was at UVM and after he graduated.