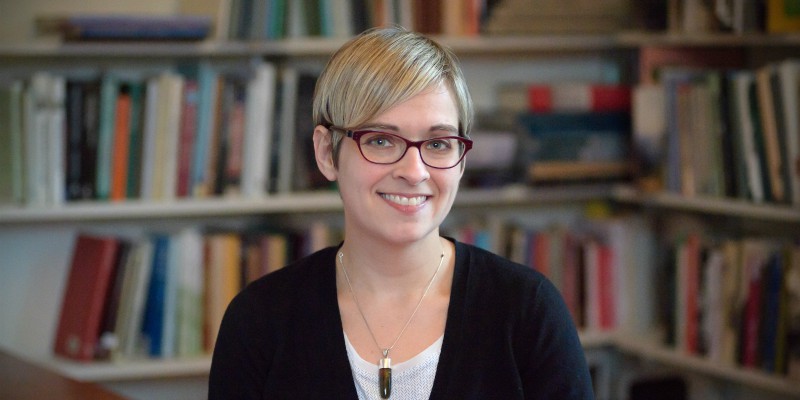 When UVM Assistant Professor of History Sarah Osten decided to spend a week in October volunteering as a translator for families seeking asylum in the U.S., she got a useful piece of advice: load your laptop with kid’s movies and bring an extra set of headphones.

The advice hit home when Osten began interpreting for families that had recently arrived at the South Texas Family Residential Center in Dilley, Texas, the largest immigration detention center for women and children in the U.S.

The stories they told detailed the underlying reasons for their flight—rape, extortion or threats of violence.

“The preparation for their ‘credible fear’ interviews with immigration officials could take anywhere from 90 minutes to four hours, and women were understandably anxious about being separated from their kids for that long,” Osten explained. “How can you talk with them candidly about these things with their children present? So I cued up a movie and handed the kids headphones.”

The kids squealed in delight to the movie Cars while Osten went to work for the Dilley Pro Bono Project.

The non-profit is an offshoot of the Immigration Justice Campaign, a nationwide initiative that aims to ensure due process for detained immigrants by providing free legal counsel. Osten and her fellow volunteers received preparation that included online videos, conference calls, and a four-hour training session after arrival.

Osten is fluent in Spanish and she spent five 12-hour days interpreting detainee stories for volunteer attorneys versed in immigration law. Then she dispensed legal advice back to the detainees, most of them from Honduras, El Salvador and Guatemala.

The trick to these conversations, Osten discovered, was establishing a connection between the detainee’s experience and the strict legal definition of “credible fear.” Detainees had to demonstrate that a return to their native counties would put them at risk of violence their governments could not protect them from.

“People experienced terrible things that you and I would agree were very good reasons to flee, but they might not be legally relevant as parts of an asylum claim,” Osten said. “Part of our work was explaining the law and the asylum process to clients.”

The Dilley Pro Bono Projecthas a 99% success rate of helping detainees get past the credible fear interview, the first hurdle in the asylum process (nationally about 76% percent pass the interview) but the math is against detainees requesting asylum. Even when the “reasonable fear” standard is established, only 10% of asylum requests are successful, and the process can take years to complete.

Criminal gangs like the oft-cited Mara Salvatrucha (or MS-13) are involved in the drug trade, Osten said, but members are essentially contractors for large drug trafficking organizations, working as low-level warehouse guards or smugglers. Gangs make most of their money through extortion, and their targets are not the rich and famous.

At risk are the most vulnerable people in society like single mothers trying to make a living by running a small enterprise—perhaps a grocery store or a laundry business. If the business generates any kind of profit, gang members inevitably show up demanding payoffs. Failure to comply can mean death.

“After the first day I phoned my husband and said ‘Central American gangs are so much worse than I thought,’” Osten said.

Osten was also struck by how much violence in Central America is a woman’s issue. Almost every woman she interviewed at Dilley was sexually assaulted or raped. Human traffickers offer an avenue for escape, but at a steep price—they can demand $10,000-$15,000 to escort a person to the U.S. border.

Women with relations in the U.S. or elsewhere may be able to scrape together the cash, but still may face the heartbreaking choice of which child to take with them and which to leave behind in the care of relatives. The last resort for women who cannot afford transport is the caravan. There is strength in numbers, and the society of a caravan offers more protection than local police, who are often in the pocket of local gangs.

As a volunteer, Osten paid for her own accommodations and meals while in Dilley. She stayed in a local hotel and drove in each day to the detention center with her volunteer cohorts. The facility accommodated up to 2,400 people at the time (there were about 1,900 the week Osten was there) but she only had access to one trailer of the compound where she met with clients.

A neighboring trailer served as a makeshift courtroom—immigrants who did not pass the credible fear litmus test could appeal the decision to a judge who was not on the premises but teleconferenced into the facility.

Osten still felt the sense of desperation immigrants brought with them. After being detained at the border, immigrants stayed in cages so cold they were commonly referred to as “iceboxes.” Women who cross the border with children and plan to petition for asylum are the relocated to the Dilley facility. Due to close contact with fellow travelers and the stress of the long journey, many women and children arrived with upper respiratory infections.

Water was a problem. Between widespread fracking in the region and the proximity of the immigration facility and a Texas state prison, the local sewer system was overwhelmed. Osten and fellow volunteers were instructed not to drink the water—immigrants had to take their chances. As they awaited their hearings, arrivals were fed twice a day and a clinic was available for medical treatment. But the lines to see a doctor were long, and those who waited for treatment risked missing a meal. One toddler, Mairee Juarez, died shortly after being released from the Dilley facility, a few months before Osten was there.

After signing up as a volunteer for the Dilley Pro Bono Project, Osten didn’t know what week she would travel to Texas.

“Coincidentally, I left during the week I was planning on covering Central America in my History of Drugs in Latin America class,” she said. “The week I was gone I had students do independent research projects on gangs and drug trafficking while I was working with asylum seekers in Dilley.”

She couldn’t have constructed a more relevant lesson plan. It was during Osten’s stay in Texas that the migrant caravan approaching the border became big news.

“I got home to 40 fired-up students really passionate about this subject and really well informed—because they had done these projects in my absence,” she said.

Osten gave students in the class the option of writing a final paper covering the historical background on gangs, drugs and migration out of Central America. She’ll use their work for a website containing historical background briefs for attorneys representing asylum seekers. Senior David Smith is working with Osten this semester to piece the site together, which will include research of his own.

“As a historian working with this volunteer team, I had many people asking questions like: ‘What is the origin of Mara Salvatrucha?,’ and ‘Why are they so many gangs in El Salvador?’ I think making this resource available will help provide attorneys with important context for their work.” 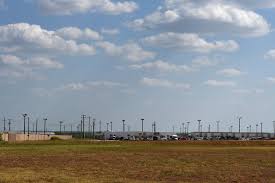