University of Vermont Professor Jon Erickson has never been a fan of the status quo.

As an ecological economist, his national and international scholarship has challenged the core assumptions of mainstream economics. As a social entrepreneur, he has helped build interdisciplinary research-to-action collaborations between reluctant academic, government and civil society partners. Now as an up-and-coming independent filmmaker, he’s gauging the strength a new era of progressive politics in America he thinks may be waking at just the right moment to seed the social movement of a generation.

“Waking the Sleeping Giant: the Making of a Political Revolution” is a feature-length documentary that chronicles the growing strength of the American progressive movement. Erickson wrote, directed and filmed the documentary over the last three years with former Senate staffer Jacob Smith, veteran political consultant Kathryn Goldman, and a team of cinematographers from around the country.

The film will be released on April 19 when it opens the Thin Line Fest in Denton, Texas, followed on May 11 by an international premiere at the DOXA Documentary Film Festival in Vancouver in the event's “Spotlight on Troublemakers” series. A Vermont premiere is in the works for late May and a screening is planned for the People’s Summit in Chicago in June, an annual gathering of thousands of progressive activists.

The film is structured around the arc of Bernie Sanders’ presidential bid, beginning in January 2015 before Sanders had officially announced his candidacy, following him to the Iowa caucuses and through the primary campaign to the Democratic National Convention in July 2016.

Along the way, it chronicles the elements of a re-energized progressive movement in America through personal stories of struggle for democractic principles and reform, including Black Lives Matter activists in Los Angeles fighting institutionalized racism in the police force; a grassroots political candidacy of a West Virginian rising from generational poverty against all odds to run for state office; and a wave of progressive activism among Millennials to protect voting rights and confront the corrupting influence of money in politics head on.

The film features interviews with notable progressive thinkers and commentators, including former Labor Secretary Robert Reich, Dream Corps co-founder Van Jones, Democracy Now!’s host Amy Goodman, and host and founder of The Young Turks Cenk Uygur. Rising voices in the progressive movement appear along the way, including Linda Sarsour, one of the organizers of the Women’s March on Washington, and key players in the Sanders “Political Revolution” such as The People for Bernie’s Winnie Wong and Becky Bond and Zack Exley, co-authors of the new book Rules for Revolutionaries.

Erickson, who crisscrossed the country making the film, says it was a “crash course in the state of American politics,” but also a reminder that, “we are a democracy that still aspires to care for and love our neighbors, all our neighbors and all our communities.” He witnessed firsthand, “the insurgency of the Sanders campaign on first principles of justice and respect that we should take to heart against a backdrop of a two-party system that has lost touch with basic grade-school lessons on the aspirations of American democracy.”

Erickson has collaborated on eight documentary films in the past with Vermont-based non-profit Bright Blue EcoMedia as a producer and cinematographer, including the Emmy award-winning PBS series “Bloom” on the problem and solutions to Lake Champlain pollution. He is the David Blittersdorf Professor of Sustainability Science and Policy in the Rubenstein School of Environment and Natural Resources and fellow of UVM’s Gund Institute for Environment. 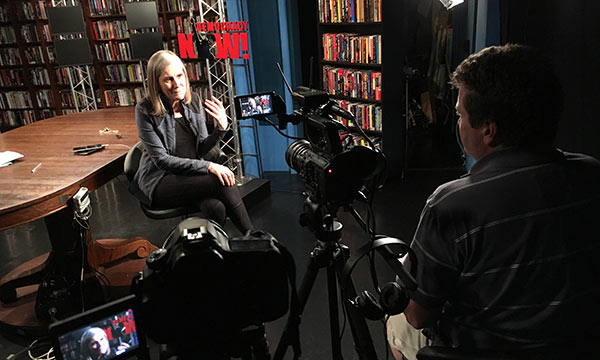