UVM Event Makes a Mash of Art and Technology 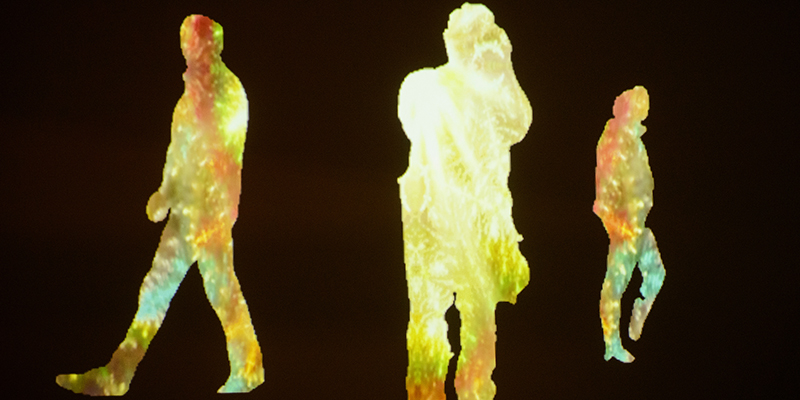 Using motion sensing to detect the outline of a viewer and custom software to translate the silhouette to a moving video image, a work by two Champlain College faculty, Ken Howell and Terry Sehr, was one of 11 featured pieces that combined art and technology at a UVM-sponsored event called Sector Mash. (Photo: Brian Jenkins)

Inside a virtual world visible through a VR headset, a wash of water shimmers on the floor of a brightly wallpapered room, then rises imperceptibly. As the water fills the space, gradually enveloping the VR viewer’s legs, waste, neck and head before meeting the ceiling, leaving behind a dizzily swaying underwater view of the room, barely audible women’s voices in the background sound increasingly agitated and aggrieved.

We have lingered in the chambers of the sea …

Till human voices wake us, and we drown

McGahan was showing her work at a UVM-sponsored event called Sector Mash, held October 15 at the Burlington makerspace Generator, whose purpose was to bring artists and technologists together to learn what each had to offer the other. The event kicked off Innovation Week, sponsored by the local non-profit BTV Ignite.

McGahan is a fan of the new possibilities emerging technologies like VR bring to creative expression.

“I think it's great to show people what other mediums are out there that they might not know are available or how something can be presented in that form,” McGahan said.

That sentiment is exactly what Richard Galbraith, UVM’s vice president for research, hoped the event – co-sponsored by his office and two local non-profits, Code for BTV and Big Heavy World – would convey.

“My office is involved in trying to foster the activities of the faculty, not just in research, but in scholarship and the creative arts,” he said. “If we can demonstrate how technology is helping stimulate creative artists’ imagination and expose them to new media to work with that they hadn't thought of before, then I'm doing my job.”

From flocking algorithms to iPhones

In all the event had 11 art/tech demonstrations. In addition to the VR installation, they ranged from shape-shifting bursts of tiny colored particles projected on a wall created using a flocking algorithm, designed by Champlain College faculty member Terry Sehr, to a dance of wheel-like geometric shapes projected on another wall, created by Jenn Karson, a lecturer in digital arts at UVM.

Karson’s work, created in collaboration with UVM lecturer and IBM guru John Cohn, is at heart a trick. It looks like the geometric projections are shadows cast on the wall. But they actually result from “a sensor communicating with a computer that’s running code taking readings and moving a 3D model,” she says.

Mixing art and technology as she does – “I love the fact that people haven't always been able to separate the technology from the art,” she says – makes for good creative work. It’s also strategic for the higher ed sector, Karson says.

“From the perspective of being at the University of Vermont, almost all of our students are coming in with an iPhone or some sort of smart phone, which itself is an incredible mix of art and technology.” Students expect to see these worlds blended, not siloed, when they arrive on campus, she says.

The event was a true mutual admiration society. For every artist who saw the benefit of using technology to push boundaries, there were technologists like Jarlath O’Neil-Dunne, the director of UVM’s Spatial Analysis Lab.

For O’Neil-Dunne and his colleagues at the SAL, art and artists are essential to making their work, which frequently involves satellite or drone photography, impactful and effective.

“People are inundated with information, and if you can’t condense what you're trying to get across into something that's easily digestible, that makes sense, that resonates with someone, you're not going to get your message across,” he says. “The folks that have those keen eyes for design and presentation are just as in demand as the computer science people.”

In addition to providing a forum for mutual exploration by artists and technologists, Sector Mash was a networking bash to end all networking bashes.

During a round of lightening talks, the representatives of close to 20 arts, technology, economic development, venture financing and community groups – ranging from Girl Develop It to the Vermont Arts Council to the Champlain Maker Fair to the Burlington Code Academy – made brief pitches to the assembled  crowd of about 200.

According to Nick Floersh ­­of Code for BTV, a pro-bono digital agency that works with non-profits, the diverse array of presenters was intentional.

“We find that there's so many organizations and groups within the various sectors, they often didn't even know about each other,” he said. The event was in part a way to “get it all just out there, and see if you can to try to initiate the bridge building.”

To get the point across that the arts and technology sectors have much to gain from synergistic collaboration, Galbraith points to the example of the laser.

When they were first discovered, “lasers didn’t do anything except shine a bright light,” he says. “Yet lasers have permeated themselves though high tech, through medicine, through the arts, so this technology became adapted to multiple different things.”

McGahan’s VR piece, both in its dialog, composed from snippets of overheard conversation, and in the water build-up, was about “the slow, subtle, insidious gradual building of our ideas about gender,” she said.

The VR presentation gave that theme a psychological punch that it’s hard to imagine a more conventional medium delivering.

New to the area and relatively new to VR, McGahan said the Sector Mash “was a great thing. I would've loved to come to an event like this before I knew what I was doing.”